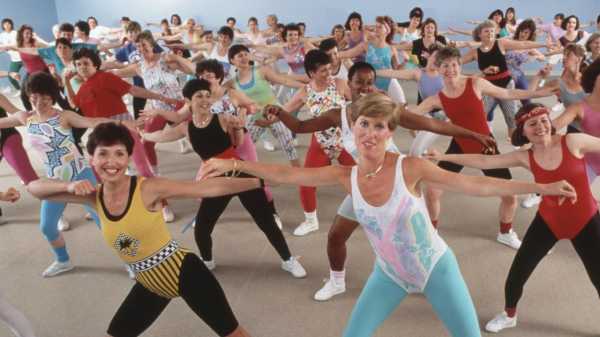 Much of consequence happened in 1969, which means that this year is chockablock with golden anniversaries: the moon landing, Stonewall, the Manson murders. But do not neglect the fact that 2019 also marks a half century of Jazzercise.

The leaders of Jazzercise, Inc., know what you’re thinking. “When you hear Jazzercise you think legwarmers and leotards, right? Or a workout for your Mom but not for you?” the company’s Web site says. “It’s true that we were the original dance party workout. But today the leotards—and the 80’s—are long gone and our classes are way too hot for legwarmers.” Countless workout fads have come along since the heyday of Jazzercise: Tae Bo, Pilates, Zumba, boxing, spinning, pole dancing. And yet Jazzercise persists: today, according to the company, there are more than seven thousand franchises, serving roughly two hundred and fifty thousand customers in twenty-five countries and grossing somewhere between ninety-five million and a hundred million dollars per year. It’s big in Japan.

“We never really wore many leg warmers,” Judi Sheppard Missett, the founder and C.E.O., told me last week. Missett lives in Southern California, near the company’s headquarters, in Carlsbad. At seventy-five, she still teaches three Jazzercise classes a week, and, until a year and a half ago, she choreographed new routines every ten weeks—a duty that she now shares with her daughter, Shanna Missett Nelson, who has been the company’s president since 2010. Missett was passing through New York to promote her new book, “Building a Business with a Beat.” We met in the Club Lounge of the Ritz-Carlton, where she sipped Dr. Pepper from a wine glass and wore blue tie-dyed pants, a black sweater, and a tangle of necklaces. The leg warmers, she said, were more of a Jane Fonda thing.

Back in 1969, Missett was a twenty-five-year-old jazz dancer living in Evanston, Illinois, with her husband, who was working as a TV-news reporter, and her one-year-old daughter. A dancer since girlhood—in Iowa, in 1961, she’d been crowned America’s Most Beautiful Majorette, after impressing the judges by twirling a baton festooned with corn cobs—she had studied at Northwestern University, helping to pay her way through college by dancing at industrial theatre shows for Admiral appliances and Philco TV sets. She continued dancing with Giordano Jazz Dance Chicago and planned to pursue a career on the stage. At Giordano’s studios, she taught a morning class called Jazz Dance for Adult Beginners. But her students, mostly stay-at-home mothers, kept dropping out. “It bugged me,” she recalled. “I said, ‘How come you didn’t come back? How can I improve?’ And they said, ‘Well, you’re teaching the class like we’re going to go on and become professional dancers, when in fact we don’t want to be professional dancers. We want to look like one.’ ”

There was no real fitness industry back then, and exercise was mostly weight lifting and military-style calisthenics. “The mentality wasn’t so much about fitness; it was about looking good,” Missett said. “ ‘I want to get my hips smaller. I want to lose five pounds.’ It wasn’t about health and wellness.” Missett had wowed the employees at her local Y.M.C.A. after taking a test to “find your fitness level,” so she knew that dancing was a great way to get in shape—and it was enjoyable, too. She retitled her class Jazz Dance for Fun and Fitness, teaching simple routines to jazz and Top Forty hits. The class grew from fifteen students to thirty, then to sixty. The Missetts moved to San Diego County, in 1972, where she continued teaching, at the La Jolla Y.M.C.A. One of her students suggested the name Jazzercise, and she trademarked it with the help of another student, who worked at a law office.

“Before I knew it, I was doing thirty-five classes a week, and I lost my voice,” Missett went on. She realized that she had to branch out, so she trained five of her top students to teach their own classes. “By the time 1980 rolled around, I had over a thousand instructors all over the country.” At first, she sent out notations of the choreography on paper, but the arrival of home-video recorders allowed her to make training tapes, which the company would distribute along with music—packages of thirty or forty albums, which gave way to cassette tapes. (The advent of iPods made things much less cumbersome.) “In the eighties, it was a lot of disco and Donna Summer and KC and the Sunshine Band,” Missett said. She turned Jazzercise classes into commercial franchises—the other “hot franchise” at the time, she recalled, was Domino’s Pizza—and in 1981 released a gold-selling “Jazzercise” album, with tracks including “Boogie Woogie Bugle Boy” and “Girl from Ipanema.” A workout video followed, featuring Missett as a goofy yet nudging taskmaster. (“Come on, find your pelvis! I know you’ve got one!”)

As the fitness craze grew, Missett faced new competitors, such as Jane Fonda and Richard Simmons. But, unlike them, she didn’t market herself as a celebrity trainer. The brand was the star, and the emphasis was on live classes, not tapes. Missett grabbed every marketing opportunity she could find; Jazzercise ads appeared on the back of cereal boxes, and Missett and her dancers backed up Lou Rawls and Willie Nelson at the Del Mar Fairgrounds. She once went on Dinah Shore’s talk show to promote her first Jazzercise book, and she had a friend whip up a branded leotard. “Well, the next day, when I went to class, everybody was, like, ‘Where can we get those leotards?’ ” she recalled. An apparel division was born. In what may have been the brand’s cultural apotheosis, Missett nabbed a spot in the opening ceremony of the 1984 Summer Olympics, in Los Angeles, alongside some three hundred Jazzercisers.

The night before I met Missett, I stopped by the CompleteBody gym in the Flatiron district, which offers the only remaining Jazzercise class in the five boroughs. (The brand is more popular in the suburbs.) As someone who is fervently anti-exercise—but pro-jazz!—I wondered how I would fare. I half expected to see perms and pastels, but there was no trace of the Reagan era. Instead of “Boogie Woogie Bugle Boy,” the playlist was what you might hear at a night club at a beach resort: Afrojack’s “SummerThing!” and the dance anthem “I Just Got Paid.” There were fifteen students; I was the only man. According to Missett, just two per cent of Jazzercise students are men (“I think it’s because dance has a stigma to it”), although, for whatever reason, there are more men in warmer countries, such as Mexico and Italy.

Our instructor was Kelsey, a ponytailed woman in a purple tank top. She started us off with some intro steps, which evolved into basic routines even I almost got the hang of. The age range of the students ran from around mid-twenties to fifties or sixties. One woman said that she had been Jazzercising since 1980, and had even taught her own class, on Fifty-ninth Street. “We used to dance with stirrup tights,” she said. “Then everything changed to sneakers.” Amy Reeder, a thirty-eight-year-old comic-book artist, said that her mother had been an instructor in Colorado, so she had grown up watching Missett’s training videos. “I like that it’s a little bit of a mental challenge,” she said. “It keeps me from being bored while I’m exercising.”

Kelsey, who was peppy but emphatic, instructed us to push, skip, reach, clap, march, roll our shoulders, shake our booties, twist our torsos like a dishrag, and pay attention to our cores. My heart rate was pleasantly high, my brow sweaty. I began to think that the muscled men boxing and bench-pressing in the next room were missing out. “Jazzercise is not complete without a little Meghan Trainor,” Kelsey announced—not something you’d hear in 1969—before playing “Let You Be Right.” “Listen to your bodies, ladies,” she urged us. “It tells you what it needs.”

Midway through, a sixteenth student sneaked in the back, wearing a black Jazzercise top with the word “FIERCE!” across the chest. “Guys, I can’t lie, I’m fangirling right now,” Kesley said, without missing a step. “That is the founder of Jazzercise.” Missett hadn’t warned her that she was coming; it was a bit like “Undercover Boss,” though her cover was blown. We moved on from cardio to strength training, lying down on mats with dumbbells, and Missett got down on the floor along with us. When class was over, she came up to me and asked, exhilarated, “Now you’re all energized, right? Me, too! I need to run around the park.”

Bellew vs Haye 2: Don’t be fooled by David Haye’s smile

China to Take Measures against Apple, Cisco If US Continues Hitting...