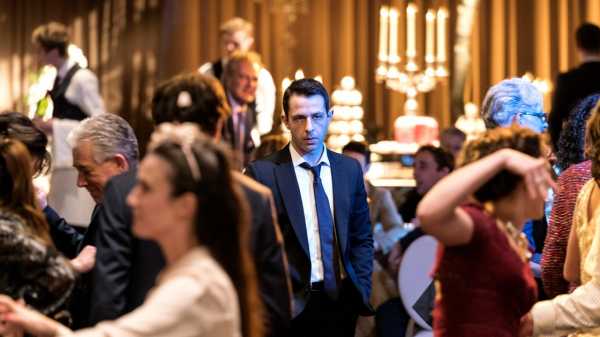 “Succession,” which wrapped its brilliant first season on Sunday night, has all the trappings of a typical HBO prestige drama, with beautiful people in luxurious locales doing terrible things to one another. The series tells the story of Logan Roy (Brian Cox), the aging patriarch of a media dynasty who, faced suddenly with his mortality, turns, Lear-like, against his scheming adult children, and in so doing puts his family’s empire in peril. It’s the stuff of tragedy, yet it would be a mistake to take any of the plot machinations—who is backstabbing whom, which corporate power play will win out—too seriously. That’s because, despite the polished opening credits, the glowering score, the dark interiors, and the incessant emotional maiming and psychic bloodshed, “Succession” has been, through most of its first season, a comedy—a progression rather than a departure from the earlier work of the creator and writer Jesse Armstrong. In the season finale, when Logan asks his son Kendall (Jeremy Strong) why he is participating in an attempted hostile takeover of his own family’s company, on the day of his sister’s wedding, no less, all Kendall can manage, after some stammering, is to answer, “To . . . do . . . some . . . good . . . things.”

In its nihilistic, squirm-inducing humor, this exchange would fit in nicely on another show that Armstrong wrote for, Armando Iannucci’s profane political satire “The Thick of It,” which ran for four seasons and two hour-long specials on the BBC from 2005 to 2012—and is available for bingeing on Hulu. (Watch if you especially loved the demented interplay between the characters Cousin Greg and Tom Wamsgans on “Succession” and are craving more lines of dialogue like “I’m going to a knife fight, and I only have a dildo made of American cheese.”) Armstrong was a lead writer on “The Thick of It” in its first three seasons, which focussed mainly on the workings of the Department of Social Affairs and its interactions with the Prime Minister’s spin doctor, the eloquently foulmouthed Scot Malcolm Tucker (Peter Capaldi, in a star-making role). A typical day at the office might include the leaking of a terrible new immigration policy to the press, a manic attempt to retract that leak, and then, once, by herculean efforts of obfuscation and debasement, the leak had been plugged, the policy would be announced by some other government official, who ended up with all the credit for what was suddenly considered a terrific idea. In “The Thick of It,” co-workers, because of their suffocating daily proximity, batter each other like members of a dysfunctional family might, cursing in a shared language of political acronyms and nonsense. “Succession” applies this dynamic of mutual distrust and contempt to family members who also happen to be co-workers, which only enhances their ability to wound. The point of all the shit talking, arm twisting, and humiliation is, nominally, the accrual of power, but for the shows’ respective ladder-climbing characters, a proximity to power has done nothing to make them feel powerful, let alone happy.

“The Thick of It” is shot in the shambolic mid-aughts style of “The Office,” emphasizing the dreariness of governmental employment. The lighting is fluorescent, the quarters are cramped, the characters’ faces are damp, and the prevailing wardrobe aesthetic is best encapsulated by Malcolm Tucker’s drab brownish suits. Both shows might be labelled as satire, but, on “The Thick of It,” the characters’ frenzied spinning often becomes pure farce, with jokes packed into every possible space. (Even the subtitles are funny: during one bout of office-wide damage control in the face of a crisis, with several characters shouting into their phones at once, the captions read “[Frantic stonewalling].”) As for emotional depth, the show’s ethos can be summed up in this exchange: the Cabinet minister Hugh Abbot asks Malcolm Tucker how he manages his hectic and consuming job. “Do you get lonely?” he says. “No,” Malcolm responds, sneering, disgusted at the suggestion of an inner life.

One of the thrills of “Succession” has been to see this kind of merciless dialogue injected into the more polite company of the hour-long drama. At one point in the season, Kendall refers to language as just “complicated airflow,” but the heart of the show is its talk—how in a single line the characters reveal themselves, their cruelties and their frailties. Logan Roy seems to end all his conversations with the phrase “fuck off.” His youngest son, Roman (Kieran Culkin), excusing himself, says, “These hands aren’t going to fuck themselves.” Logan’s daughter, Shiv (Sarah Snook), alone among her siblings, possesses a degree of self-awareness, yet she appears stunned when her stepmother diagnoses her as a spoiled brat. Logan’s oldest son, Connor (Alan Ruck), meanwhile, defends his usefulness by proclaiming that he’s on the “verge of setting up a podcast on Napoleonic history with a considerable level of investment interest.”

“Succession,” like “The Thick of It,” is cloistered in a way that reflects the myopia and selfishness of its central characters. The Roy family has thousands of employees and even more shareholders—some measure of the world’s economy hangs on the characters’ actions—and yet this grander scale never quite leaks onscreen. In a bitterly funny scene in the season finale, the dissolute Roman, who has been tasked with overseeing the launch of a company satellite in Japan, ducks out of his sister’s wedding reception to follow a live stream of it on his phone. He watches as, silently, the rocket explodes, and, as a massive ball of fire fills his little screen, Roman slips the phone into his coat pocket, washes his hands, and promptly rejoins the party, as if, with just one more flute of champagne, it might all just go away. (And, of course, it basically does: later, he rejoices to discover that no one died in the explosion, and there was a loss merely of two thumbs and perhaps one arm. “I’m not going to ruin a party over a couple of fucking thumbs,” he says, exulting.)

The point of Armstrong’s corporate power plays and political maneuvers is not to do the right thing, or even to do any one thing, but merely to survive to fight another day. Midway through “Succession” ’s first season, Kendall tries to oust his father by arranging a vote of no confidence from the company’s board. It fails. But then it is on to another maneuver in the finale. One of the early criticisms of the show from viewers was that it was difficult to root for any of these monstrous people—but that presumes that there are outcomes to root for. Yet one of the achievements of Armstrong’s writing is how it manages to instill immense tension in plots that no one onscreen takes entirely seriously.

In Sunday’s finale, “Succession” takes a sharp turn toward the truly tragic on Shiv’s wedding night, in a Chappaquiddick-esque moment that resets the power dynamic within the Roy family. It is here that the series asserts itself as something more than a lark—showing that there might be consequences for all the mayhem, and that these characters might, despite their verbal weaponry and insulation from the realities of life, actually feel something after all. The glimmer of humanity comes in the episode’s final moments, though it’s not extended to the poor caterer who drowns when Kendall, due to a mixture of cocaine and bad stick-shift driving, crashes the car they’re riding into a river and flees the scene. The next morning, Logan offers to clean up his son’s mess, and embraces him into the warmth of his big wool sweater. He pats the back of his head, calling him his “No. 1 boy.” It seems almost genuine, nearly moving. But then Logan looks up and gestures for his body man to come and take his blubbering son away. Back to business.