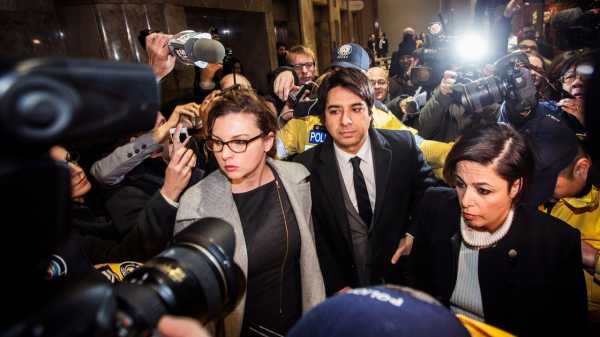 The sexual-assault allegations against the movie producer Harvey Weinstein were first reported in October, 2017, which means that we have now spent eleven months listening to the victims of such violence, most of them women. This is a deeply unusual situation in the context of human history, and, lately, a set of compensatory forces has appeared to be working to bring the universe back into balance. Women have had their “moment,” their unprecedented time in the spotlight of cultural favor. The gravitational pull of male power is exerting itself, turning our attention back to the place where it has been trained to linger: the hero’s journey of men.

This phase of our arduous collective journey began, I would suggest, at the end of August, when Louis C.K. performed a surprise “comeback” set at the Comedy Cellar. (Flares went up much earlier—the Times reported in April, for instance, that Mario Batali had been holding meetings about his “second act,” after Eater reported instances of inappropriate touching by the restaurateur.) The comedian had been disgraced in November, 2017, when the Times revealed the details of what had long been an open secret in the comedy world: that C.K. liked to take his penis out and masturbate in front of women who had not requested that this occur. Though C.K. had previously denied the rumor—“That’s nothing to me. That’s not real,” he told New York, in 2016—he confirmed to the Times that the women were telling the truth. Pity for the comedian surfaced quickly. “I imagine that the price he’s paid at this point is so beyond anything,” Matt Damon said, one month after the Times published its story. When C.K. showed up at the Comedy Cellar a few weeks ago, he reportedly received a standing ovation before he began speaking. (He then made a joke about rape whistles.) Many who read about the performance were appalled; others suggested that C.K. had “served his time.” (In this metaphor, the phenomenon of people finding out and responding to the truth about your behavior is akin to carceral punishment.) The laws of patriarchal physics dictate that for every act of sexual assault or harassment a man deserves an equal and opposite second chance.

Then, last week, Harper’s published a first-person essay by the American former radio host John Hockenberry and the New York Review of Books published one by the Canadian former radio host Jian Ghomeshi. Hockenberry had taken an early and seemingly honorable retirement from WNYC, a year ago. But, in December, Suki Kim, who had also worked at WNYC, reported, for the Cut, accounts of Hockenberry’s apparent pattern of workplace sexual harassment: he had allegedly, among other things, kissed two colleagues against their will, touched another inappropriately, asked a staffer if she wanted to get a hotel room, and told an intern, “Let’s get you drunk.” Internal complaints led to Hockenberry’s early departure.

In his essay, Hockenberry spends nearly seven thousand words wandering incoherently through a landscape of molasses-thick pathos and defensive bewilderment about this fate. He calls himself a “misguided romantic.” He likens himself to “Lolita,” an old book that can no longer be celebrated in the contemporary era, and also to the titular character: “To my great surprise, in 2018 I find myself identifying with Lolita, her innocence lost along with any identity other than sexual.” This statement, he writes, revelling in his willingness to be a martyr for the cause of bold thinking, may “bring down a wrath from my critics and accusers much greater than what I have endured up to now.”

That Hockenberry could publish so many words about his plight in a prestigious magazine without seriously grappling with the experiences of the women whose lives were affected by his advances—that nearly a year of self-searching brought him to the conclusion that he and a fictional twelve-year-old rape victim were more alike than he’d thought—signals well enough that the power structures facilitating sexual assault and harassment remain very much intact. “I feel sorry for a lot of these men,” Michelle Goldberg wrote, in the Times, in a column about Hockenberry’s essay, “but I don’t think they feel sorry for women, or think about women’s experience much at all.”

Just as troubling, perhaps, is that their editors evidently do not ask them to. The many accusations of physical and sexual assault against Jian Ghomeshi predate the post-Weinstein phase of the #MeToo movement by three years: in October, 2014, three women told the Toronto Star that Ghomeshi had “struck them with a closed fist or open hand; bit them; choked them until they almost passed out; covered their nose and mouth so that they had difficulty breathing; and that they were verbally abused during and after sex.” Within a month, fifteen women told the Star that Ghomeshi had sexually abused them; two more accused him of harassment; two men said that the radio host had fondled their genitals without permission; and a woman said that Ghomeshi had made advances toward her when she was sixteen and he was forty. Ghomeshi was charged with sexual assault relating to six women, and pleaded not guilty; he was acquitted of all charges, in 2016. (One charge was withdrawn in exchange for Ghomeshi signing a peace bond and admitting wrongdoing, though he did so in vague terms.)

In his essay, Ghomeshi sums up the Star’s intensive reporting by explaining that “allegations circulated online that I’d been abusive to an ex-girlfriend during sex,” and that “amid a media storm, several more people accused me of sexual misconduct.” He “cannot confess to the accusations that are inaccurate,” he writes—not specifying further—but he can confess to being “emotionally thoughtless,” a man who tried to “entice women and lead them on when they were interested.” It gets even worse, he admits gravely. He was critical and dismissive and moody, “insufficiently respectful and responsive” to the women in his life. The significant gap between being a bad boyfriend and being a person who is publicly accused of physical and sexual brutality by nearly twenty women remains unplumbed.

Like Hockenberry, Ghomeshi insists that he is in favor of cultural progress, then mischaracterizes the direction of that progress in order to disown it. He is “not planning to seek public absolution through the embrace of a notion that all men are evil,” he writes. But he has “had a crash course in empathy,” which has given him “a new unwavering antipathy toward schadenfreude” and “a different way of seeing anyone who is being attacked in the public sphere, even those with whom I may profoundly disagree.” In other words, Ghomeshi has been developing empathy primarily for the accused. He and Hockenberry, and the otherwise left-leaning magazines that published them, are helping to establish a liberal men’s-rights discourse in which all the old and terrible structures of male supremacy are rebuilt, coated with a veneer of independent thinking, and fronted by a tactical insistence that everyone involved has the utmost respect for women, is absolutely on the side of equality, and is just asking the complicated questions that must be asked.

After Ghomeshi’s essay was published, Ian Buruma, the editor of the New York Review of Books, gave a chilling interview to Isaac Chotiner, of Slate. Buruma claimed to support the #MeToo movement as a “necessary corrective.” When Chotiner reminded him that Ghomeshi has been accused of numerous acts of sexual assault, “including punching women in the head,” he responded, “The exact nature of his behavior—how much consent was involved—I have no idea, nor is that really my concern.” What Buruma wanted to explore, he said, was the experience of “being at the top of the world, doing more or less what you like, being a jerk in many ways, and then finding your life ruined and being a public villain and pilloried.”

The phrase “finding your life ruined” is remarkably telling. For Buruma and Ghomeshi and Hockenberry, and for many others, the abuse of women is not the problem—naming it, and giving it consequences, is the problem. Hockenberry asks, as if he is writing from a guillotine, “Is my life a reasonable price exacted in the pursuit of justice, or is my situation an injustice born of a deeper dysfunction in the matters of gender and a fear of confronting anything beyond revenges, purges, and humiliation?” Women’s careers and psyches have been torpedoed by male exploitation for centuries, but it is a shame, apparently, for the men who exploited them to have to answer for what they’ve done.

The worst thing about this accursed genre of personal essay—“My Year of Being Held Responsible for My Own Behavior”—may be that it consists, almost necessarily, of terrible writing. It is hypothetically possible for such an essay to model a path forward that does not require dissembling and absolution, for a man to grapple with a history of specific wrongdoing without insisting on his own centrality for several thousand words. But the Venn diagram between serial harassers and abusers and people capable of fundamental honesty may not produce much of an overlap. I, too, am interested—to an extent—in what will happen to men whose inappropriate behavior, or worse, has been exposed. On several occasions in the past year, I’ve had conversations with people in my field whose places of employment had considered hiring, or did hire, semi-disgraced men with records of sexual harassment and exploitation. In none of these specific cases have I felt that the man in question deserved to be permanently unemployable. (There is, of course, a difference between having a job and immediately reclaiming one’s previous heights—or further ascending. For Brett Kavanaugh, for instance, newly accused of sexually assaulting a woman when he was seventeen and she was fifteen—he has denied the accusations—the choice is not between erasing his existence or confirming him to the Supreme Court.) In all of the cases that I heard about, it seemed to me essential, as a bare first step, for the man in question to understand that his experience is not inherently more important than the experiences of women, to acknowledge what he did, and that it was wrong. This is the minimum precondition for the better world we’re struggling toward. It is amazing, if not surprising, how many of the men in question are incapable of it.

Tim Vickery’s South Americans to watch at the World Cup