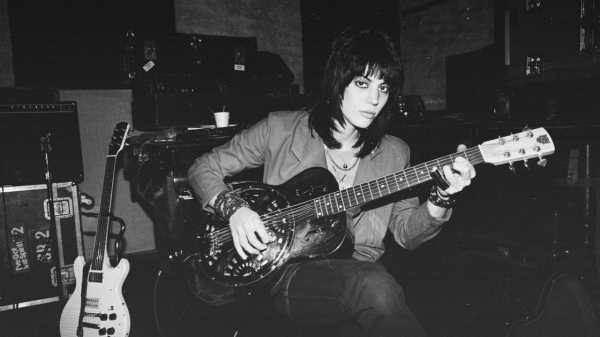 Not long ago, I saw “Bad Reputation,” the new documentary about Joan Jett, and came out of it exhilarated, listening to “I Love Rock ’n Roll” while powering down Sixth Avenue. Jett’s sound—the full-throttle drums, guitar, and vocals—made me feel a joyous, uncharacteristic assertiveness. Instead of skirting pedestrian traffic, I walked confidently, claiming part of the sidewalk—and was suddenly blasted back to a sense memory of childhood, when I would request “I Love Rock ’n Roll” at the roller rink and pound my skates in time with the beat. In that era, I liked to wear a T-shirt that said “Let’s Face It—Girls Are Smarter.” And in recent weeks, as the wheels have flown off the shabby jalopy that is American civic life, Jett’s music has helped me feel better. I was a sensitive kid and am a sensitive adult, and I was intrigued to learn, by watching “Bad Reputation,” that Jett is sensitive, too.

Recently, I talked to Jett for “The New Yorker Radio Hour,” and she told me how she developed her sound. (You can hear the radio segment here; what follows is from our fuller conversation.) When she was growing up, she said, her parents listened to Johnny Mathis, classical, Sinatra, Top Forty. “Then, something caught my ear as puberty was hitting,” she told me: rock and roll. “I was noticing the guitar sounds. It was resonating in my body with a feeling I couldn’t quite put my finger on, what was going on, but I felt an energy.” She and her mother went to see Liza Minnelli in “Cabaret.” “The music was incredible. Visually, it was stunning and rich. It was campy, it was pushing the boundaries. Liza made me want to perform.”

What happened next begins “Bad Reputation”: Jett asked for an electric guitar, and her parents gave her one for Christmas. Then she took lessons and told her teacher she wanted to play rock and roll. “Girls don’t play rock and roll,” he said, and taught her “On Top of Old Smokey.” He wasn’t saying that girls can’t master the guitar, Jett told me, but that “girls aren’t allowed to play guitar socially. I can’t be the Rolling Stones. Rock and roll, by its nature, exudes sexuality. A girl playing rock and roll, it’s going to be sexual. Americans are very uncomfortable with that—with women and sexuality in general, but when you get to teen-agers expressing themselves, forget about it.”

Jett’s primal, commanding sound is, in part, a reaction to that attitude. As a teen-ager, she co-founded the all-girl band the Runaways, fronted by Cherie Currie—a group that was adored by many and disparaged, with sexist language, by others. Later, she wrote the song “Bad Reputation” in response to such reactions. “When I met my best friend and producer-songwriting-partner, Kenny Laguna, we were talking about subjects to write songs about, talking about my life,” she told me. They landed on the idea of making fun of the criticism “in a tongue-in-cheek way.” Laguna had had a successful career in a Brill Building-style songwriting factory that made bubblegum records. He brought an ear for catchy tunes; Jett, he’s said, brought the “menace.” They recruited male band members—the Blackhearts—and recorded songs with a sound that’s at once forceful, fun, and inclusive. “Bad Reputation” feels like a rebel’s song—a breakin’-all-the-rules eff-you to society—but it’s actually about ignoring unearned smack talk, Jett told me. That’s clear from the song’s opening lines:

“Bad Reputation” came out in 1981, as the first single off Jett’s début album, and has since had a robust pop-cultural life, including as the opening theme to “Freaks and Geeks,” in 1999. (Hearing it play as a parade of misfit kids pose for school-portrait photos feels simultaneously funny and righteous; its use in the sequence enhanced my love for both the song and the show.) At the time of its release, though, Jett didn’t have much of a reputation beyond her work with the Runaways. Laguna famously sent the demo of Joan Jett and the Blackhearts’ album to twenty-three labels, and got twenty-three rejections. In response, Jett and Laguna formed their own label, and thus retained all rights to the material. At one point in the film, Ian MacKaye, of Fugazi and beyond, heralds Jett as a D.I.Y. pioneer.

When Jett burst into the mainstream, in 1982, via the guitar-driven “I Love Rock ’n Roll,” it felt like a revelation. We’d heard hard-driving rock songs performed by women before, such as Heart’s “Barracuda” and Pat Benatar’s “Hit Me with Your Best Shot.” To the delicate (me, for example), some of this, like the hitting in Benatar’s song, felt a little scary. But “I Love Rock ’n Roll” managed to be strong and friendly at the same time. It invited you in. At my summer camp, it washed triumphantly over all of us, delighting kids and teens, boys and girls alike, everybody singing it and dancing around. To witness such universal admiration for a woman-powered song felt deeply good to me as a kid. “Fuck it, I’m in!” Billie Joe Armstrong says in the movie, paraphrasing his childhood reaction. “I want to be the male version of that.” The song went to No. 1 and dominated the charts for weeks, MTV played it in heavy rotation, and Jett and the Blackhearts went on a world tour and started playing stadiums.

Jett’s breakthrough inspired others. As a girl, Kathleen Hanna, who went on to co-found Bikini Kill and help drive the Riot Grrrl movement, heard Jett’s “Crimson and Clover,” a cover of the song by Tommy James and the Shondells in which Jett doesn’t change the pronouns. In the movie, Hanna talks about hearing Jett’s voice for the first time and being riveted by it—and by the fact that a woman could sing about intense feelings for another woman. Years later, in the early Bikini Kill era, Hanna’s phone rang, and when she answered, it was Jett. Ian MacKaye had given her a mixtape with Bikini Kill on it, and Jett wanted to work with them. She went on to produce some of their music; as the years went on, she kept producing, helping out younger emerging artists, and generally being a mensch. In the movie, Michael J. Fox, who co-starred with Jett in the movie “Light of Day,” from 1987, describes her as being sensitive and vulnerable—important qualities for artists, and especially actors, he points out—and a person who sticks up for people and causes but “isn’t mushy about it.”

In the years since her eighties hits, Jett has continued to make records with that hard-driving, appealing sound. But, as she’s matured, her themes have, too. Some songs are about sensitivity. “Insecure,” from 1994, is about the universality of that feeling. (“We’re all a little insecure.”) “Soulmates to Strangers,” from 2013, is about the weirdness of losing a close connection with a lover or a friend. “Fragile,” also from 2013, is about the tenuousness of life and love. But these songs all sound powerful, which is important. When Jett started out, in the Runaways, she was too shy to sing, she told me. What about the confidence she’s always projected? I asked. “It’s a show,” she said, and laughed. “You have to act it to be it. Seriously!” Growing up, she wasn’t shy with her friends, but onstage she had “an anxiety of failure, just a petrifying fear. But I wanted to do it enough that I forced myself to face it.” When she did, she made music that sounds as strong, sexy, angry, or joyful as she damn well feels. But it doesn’t always claim to be tough—a philosophical stance I appreciate now more than ever. The older I get, the more I realize the importance of sensitive people speaking up, and making some noise.

Trump to Meet With N Korean Defectors to Mount Pressure on...

The House’s big bill to lower drug prices and shore up...

Comey says Trump asked if he could disprove salacious allegations in...