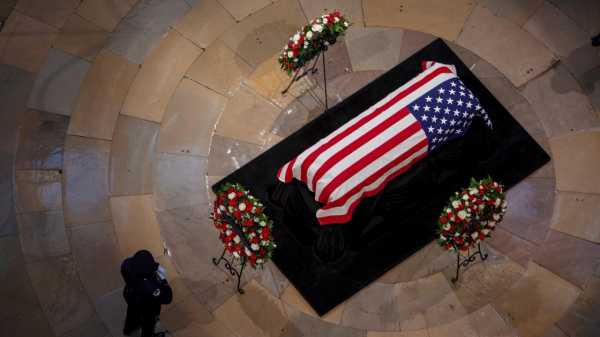 Before Senator John McCain’s casket, swaddled in a neatly laid American flag, was moved, on Saturday morning, to the National Cathedral, where his funeral would be held, it sat at the center of the Capitol rotunda, lit from above by a circle of light and surrounded by wreaths of red and white flowers. The personages in the rotunda’s artworks, Revolutionary warriors and Founding Fathers, seemed to look down at the body in a spirit of confraternity. The message conveyed by the arrangement was clear: in death, McCain had finally become one with the country that was the object of his deepest faith, and any praise lavished on him, during the funeral proceedings or at any point afterward, would redound to the greater glory of America.

Early Saturday morning, Tim Walz, a Democratic congressman from Minnesota and, like McCain, a veteran, went to visit the casket, took a picture, and sent a tweet: “I had the privilege to give one final salute to a close friend & mentor,” he wrote. “The life of @SenJohnMcCain embodied the American spirit and I will be forever grateful for his service, sacrifice, and leadership.” Walz’s obvious, and admirable, affection for his friend, and his desire to abide, one last time, with his body, reminded me of the story, recounted in the Gospels, of the women gone to visit the tomb of Jesus. McCain’s singular talent as a politician was not a penchant for passing difficult legislation—achievements like the now fatally undermined McCain-Feingold campaign-finance law were more exception than rule—or, obviously, for winning high-profile elections, but, rather, for outlining, and often enacting, the tenets of an American religion, of which he had fashioned himself a kind of high priest—and, now, a saint. Walz’s early-morning tweet was proof of a pilgrimage.

While alone in the Capitol early this morning, I had the privilege to give one final salute to a close friend & mentor. The life of @SenJohnMcCain embodied the American spirit and I will be forever grateful for his service, sacrifice, and leadership. God speed my friend. pic.twitter.com/L3c3dBfYCa

Nowhere are McCain’s articles of observance made plainer than in his farewell statement, released shortly after his passing. “I owe it”—the satisfaction of a life in military and political service—“to America,” he wrote. “To be connected to America’s causes—liberty, equal justice, respect for the dignity of all people—brings happiness more sublime than life’s fleeting pleasures. Our identities and sense of worth are not circumscribed but enlarged by serving good causes bigger than ourselves.” Sublime happiness and metaphysical enlargement, achieved through the transcendence of self, are promises usually reserved for divine, not patriotic, worship, and McCain’s invocation of liberty, justice, and respect reads like the Jeffersonian shadow of St. Paul’s list of virtues: faith, hope, and love. He was an understated Protestant, not given to much mention of the Biblical God, but, when we understand Americanism as a church, we can see the true McCain, as religious a figure as has lately crossed the national stage.

This, I think, is the key to interpreting McCain’s funeral. It was held at the National Cathedral and was an example of the synthesis implied by the name of that locale. Some proper hymns were sung, but renditions of “My Country ’Tis of Thee” and “The Battle Hymn of the Republic” were delivered just as reverently. Religious figures were present, and offered words grounded in the Christian faith, but the more passionate addresses, the ones that sprung from a world view evocative of McCain’s, came from political figures such as Joe Lieberman, Barack Obama, and George W. Bush. And the most touching—and pointed—words came from McCain’s daughter, Meghan, whose closeness with her father seems to have come from a deep comprehension of his identification with his country. Like the religious whose highest ideal is the Imitatio Christi, McCain was most himself when his actions reiterated American abstractions. So it made perfect sense for Meghan McCain to say that “we gather here to mourn the passing of American greatness. The real thing, not cheap rhetoric from men who will never come near the sacrifice he gave so willingly.”

It was, of course, a jab at Donald Trump: such jabs abounded at the service, and seemed, by the end, to be its entire aim. But here, the younger McCain had explained, better than anyone who spoke subsequently, exactly why it was right for admirers of her father to regard the sitting President with contempt. If McCain was, at least symbolically, Americanism’s high priest, Trump is now its chief heretic. And, if McCain’s farewell statement is to be treated as the final word, this is true: Trump doesn’t have any reflexive sense of fairness, or freedom, or the dignity of anyone, even himself. The sublime seems permanently beyond him. It’s true, too, that his rise to the Presidency represents a passing away: the memory of his ugliness and stupidity ought to keep an entire generation of politicians, if not more, from invoking high-flown ideals as a guarantee of decent civic behavior, or of government worth even perfunctory, let alone pious, regard.

But for all of the scorn heaped on Trump—whose name was never mentioned outright—there were questions left unanswered at the service. First: Is it really possible for a person to rise to power in a country with which he has absolutely nothing in common? Isn’t it more likely that Trump, whose most fervent devotees are white evangelicals and proponents of the fraudulent prosperity gospel, is just as archetypically American as McCain, embodying an alternative set of equally real national principles: anxious acquisitiveness, a distaste for deep thought, endless aggrandizement?

Then, too: Even if the American religion is good, and inclusive of certain eternal truths, if it can be thrown so quickly into crisis, turned so violently on itself, how sturdy was it, really?

Congress is on track to avoid a government shutdown — as...

Murray admits daughter was underwhelmed by his Queen’s success