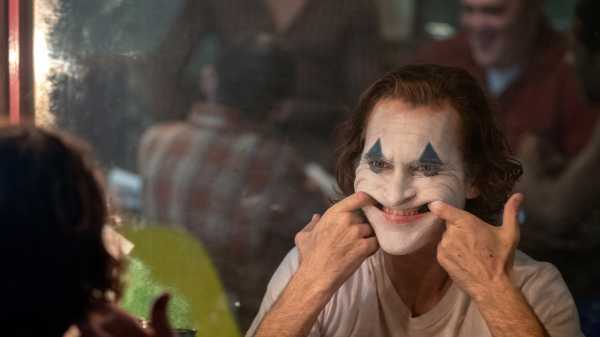 Long before “Joker” pays homage to two of the classic New York films of the nineteen-seventies and eighties, “Taxi Driver” and “The King of Comedy,” it relies on the fictitious setting of Gotham City and the pretext of a comic-book story to evoke real-life crimes—and it alludes to them from a perspective so narrow and destructive as to resemble not intention but obliviousness. The result is a movie of a cynicism so vast and pervasive as to render the viewing experience even emptier than its slapdash aesthetic does.

The first dramatic scene in “Joker,” which is set in a grungy and turbulent New Yor— I mean, Gotham City, seemingly around 1980 (judging from details of décor), shows a clown, Arthur Fleck (Joaquin Phoenix), on a busy street in midtown, working as a sign twirler for a music store. A group of teen-agers of color hassle him and steal his sign. He chases them into a garbage-strewn alley (the city is in the midst of an apocalyptic garbage strike), where one kid hits Arthur in the face with the sign and knocks him down. Then the whole group swarms him, pummels him, kicks him, and leaves him bruised and bleeding and sobbing, alone, in the filthy alley. The crime alluded to is the attack wrongly attributed to five young men mislabelled as the Central Park Five—an attack on an isolated and vulnerable white person by a group of young people of color. The scene waves away history and says, in effect, that it may not have been those five, but there was another group out there wreaking havoc; they’re not figments of a demagogue’s hate-filled imagination—here they are, and they’re the spark of all the gory action that follows.

What follows, soon thereafter, is another scene of brutality: Arthur, whose beating is the talk of the locker room at the clown agency for which he works, is handed a gun by a blustery colleague named Randall (Glenn Fleshler). When Arthur is assaulted on the subway by three young men (whites, in suits), he pulls out the gun and fires—and even pursues one of the men onto the platform in order to shoot him dead. It’s an evocation of the shooting, in 1984, by Bernhard Goetz, of four teen-agers in a subway who, Goetz believed, were about to rob him. They were four black teen-agers, and Goetz, after his arrest, made racist remarks. In “Joker,” the director, Todd Phillips (who wrote the script with Scott Silver), whitewashes Goetz’s attack, eliminating any racial motive and turning it into an act of self-defense gone out of control.

In between these two events, Arthur is seated on a city bus that’s crowded with passengers. A child seated in front of him turns around, and Arthur playfully makes funny faces at him—at which the child’s mother sharply orders Arthur to stop bothering her son. Mother and child are both black. The next day, Arthur, returning home (he has lost his job entertaining children at a hospital, because his gun fell out of his pocket), meets a neighbor, a woman named Sophie (Zazie Beetz); she, too, has a young child with her. The woman and the child are black. Arthur, who chats with Sophie for a moment, becomes obsessed with her and fantasizes about a romantic relationship with her. The nonexistence of any such relationship is among the agonies that torment him.

One more: Arthur lives in a rundown building in an ill-tended neighborhood with his mother, Penny (Frances Conroy), who is disabled and whom he cares for. He is up late at night while his mother sleeps, watching a classic movie on television, “Shall We Dance,” starring Fred Astaire and Ginger Rogers. The scene he’s watching, a musical number, set to George and Ira Gershwin’s “Slap That Bass,” begins with a group of black men who are working in the (highly stylized) engine room of an ocean liner and singing and playing music while they work—they have a jazz band, and one man (Dudley Dickerson) sings the song (along with the riffing of co-workers as a chorus) before Astaire chimes in, with their accompaniment, and then starts dancing. While he’s watching, Arthur begins to dance around the living room—gun in hand—when, in his careless enthusiasm, he pulls the trigger.

“Joker” is an intensely racialized movie, a drama awash in racial iconography that is so prevalent in the film, so provocative, and so unexamined as to be bewildering. What it seems to be saying is utterly incoherent, beyond the suggestion that Arthur, who is mentally ill, becomes violent after being assaulted by a group of people of color—and he suffers callous behavior from one black woman, and believes that he’s being ignored by another, and reacts with jubilation at the idea of being a glamorous white star amid a supporting cast of cheerful black laborers. But, unlike the public discourse around the Central Park Five, and unlike the case of Bernhard Goetz, and unlike the world, the discourse in “Joker” and the thought processes of Arthur Fleck are utterly devoid of any racial or social specificity.

Yes, “Joker” takes place in a fictitious city, a comic-book world of fantasy—but it draws its incidents and its affect parasitically from real-world events that were both the product and the cause of racist discourse and attitudes and gave rise to real-world racist outcomes of enduring, even historic, gravity. The central events of “Joker” (and I’ll try to allude to them sidelong, to avoid spoilers) are suggested by other real-world events, but here, too, Phillips voids them of their discourse and their substance. What results is more than the strenuous effort to contrive a story with resonant incidents and alluring details; “Joker” reflects political cowardice on the part of a filmmaker, and perhaps of a studio, in emptying out the specifics of the city’s modern history and current American politics so that the movie can be released as mere entertainment to viewers who are exasperated with the idea of movies being discussed in political terms—i.e., to Republicans.

In “Joker,” Arthur is quickly seen to be mentally ill, and he knows it—he takes seven medications and wants more. (The source of his trouble is revealed late in the film.) But in the course of the city’s apparent financial crisis (reminder: New York was on the verge of bankruptcy in 1975) cuts to social services also cut him off from his meds. As a result, Arthur, who’s already delusional, finds his delusions deepening; though he was already violent, his violence becomes increasingly calculated and targeted. Here, too, the movie plays into the hands of current-day political rhetoric—namely, the emphasis by Republicans who, when it comes to gun control, would rather deny weapons to the mentally ill than restrict weaponry for everyone. In the wake of Arthur’s killing spree, a public figure—Thomas Wayne (Brett Cullen), a wealthy banker for whom Penny worked decades earlier, and who, of course, is the father of a boy named Bruce—speaks of killers such as Arthur as “clowns.” This comment gives rise to a sudden mass movement of activists who dress like clowns and target the rich and the powerful. The trope resembles Hillary Clinton’s reference to many of the supporters of Donald Trump as “deplorables,” a term that was adopted by some as a badge of honor—except in “Joker” the epithet applies rather to radicals on the left, who loom as a menace waiting to happen.

Arthur is an aspiring standup comedian, who fills a notebook intended as a journal for therapeutic purposes with what he calls jokes. He writes copiously, in a frenetic and shaky handwriting, and though the film displays items from the notebook—including brief views of pornographic images he has cut from magazines—the texts we read onscreen are strictly personal (such as “I hope my death makes more cents than my life” and “The worst part about having a mental illness is that people expect you to behave like you DON’T”). Whatever Arthur is thinking, we don’t learn much about him; whatever he thinks about the world in which he lives is never divulged. His notebook is a manifesto without any substance or target.

A sidebar to Arthur’s effort to become a comedian—an effort that remains for the most part theoretical, except for his disastrous attempt to bring his act to the stage at a comedy club’s open-mike night—is his obsession with a late-night talk-show host named Murray Franklin (Robert De Niro). (In “The King of Comedy,” De Niro, of course, played the frustrated comedian Rupert Pupkin, who is obsessed with a fictitious talk-show host, Jerry Langford, played by Jerry Lewis.) Even the choice of the host is a reference—to the low-budget local New York talk-show host Joe Franklin. “Joker” is built around many such details of the era; it opens with a radio news report, on a station called 1080 WJCR, with an announcer named Stan L. Brooks (it’s a parody of the real-life 1010 WINS and its announcer, Stan Z. Burns). The movie’s décor is also specific, from touch-tone phones and Selectric typewriters to the slanted-window city buses and graffiti-covered subway cars, neon signs and clothing styles of the seventies and eighties. It doesn’t offer glaring anachronisms (as in Wes Anderson’s films, or as in the John Wick series) but specific and focussed evocations of New York at a particular time. Yet, for all the historical references in “Joker,” it’s a blatant and brazen distortion of the most substantial historical elements at which it winks. “Joker” is the comic-book “Green Book,” twisting history for the sake of a yarn.

The thematic incoherence of “Joker” is inseparable from its aesthetic emptiness. Phoenix, alternately brooding and exulting, dancing extravagantly in his underwear or in a resplendent costume or seething with rage, cringing with horror, or camping it up with an affected accent, isn’t so much unhinged as unmotivated and, to all appearances, undirected. What he delivers is less a performance than a display of his bag of actorly tricks—and they’re pretty wonderful, but they adorn a character who’s an empty framework, and, to all appearances, empty by design, for fear of alienating the target audience. The movie’s parodies of “Taxi Driver” and “The King of Comedy” are obvious; so are its pastiches of the designs and events of those movies’ times. But the crucial parody, the crucial mockery, the work of which “Joker” comes off as a callously commercial imitation, is “Black Panther”—a comic-book-based movie that infuses its framework with rigorously conceived and boldly assertive political visions to go with its elaborate world-building. “Joker” is a wannabe movie that also wants to be all things to all viewers, that imitates the notion of adding substance while only subtracting it. “Joker” is a viewing experience of a rare, numbing emptiness.