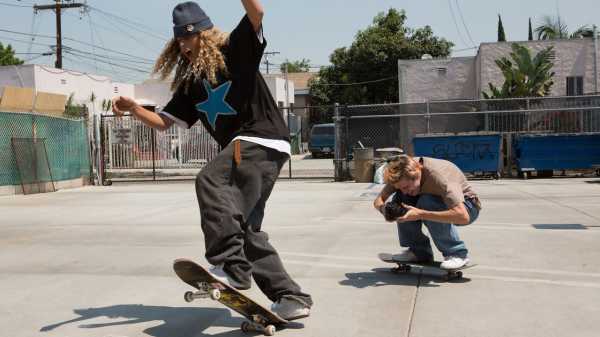 After two screenings and thirty-seven e-mail exchanges, I met Jonah Hill in a boardroom in midtown Manhattan adorned with a giant flat-screen TV and a wall completely covered in cork. He entered, wearing a black ensemble and amber-tinted glasses, and sat down before a triangle of Smartwaters. Hill talked for nearly an hour without stopping about “Mid90s,” his directorial début, and the intricacies of nineties skate culture and skate videos and their impact on him growing up. “A skate video is all skating and three seconds of bonding and friendship and chaos,” he said. “So, what if you reverse that, and it’s bonding and chaos and connections and three seconds of skating? All I wanted to do was make a reverse skate video. What I wanted were those in-between moments.”

The coming-of-age story that’s told in “Mid90s” is timeless, but the setting couldn’t be more specific. The movie takes place in the tiny, beloved gap between two great waves of popularity in the history of skateboarding: the vert-ramp craze of the nineteen-eighties (when Tony Hawk was a gangly teen-age genius) and the corporate craze of the late nineties (when Tony Hawk became Tony Hawk) that followed the high television ratings for this new “extreme” sport.

Skating’s fame in the eighties was unprecedented; never before had skaters graced magazine covers or landed speaking roles in teen movies. The sport got so big that it split into three genres: vert, street, and freestyle. Vert ramps emulated the empty swimming pools where seventies riders had finally learned to air up over the coping. Street was just that: skaters cruised, launched, slid, and were just starting to ollie through urban and suburban environments. Freestyle was different. Closer to dance and roller skating, riders in this oft-mocked, trick-based genre executed rehearsed “routines” on short, narrow boards. Vert and street crawled on after the collapse of the sport’s popularity in the late eighties, while freestyle seemingly vanished. The depths of the crash were severe on skaters themselves—with jail, drug abuse, and worse. Hawk was reduced to editing surf videos. But what rose from the ashes in the time that followed, roughly from 1990 to 1995, was extraordinary. “Mid90s” captures these raw, fleeting, beautiful years—a time of radical evolution for a sport that was then sixty years old.

Board shapes evolved more in six months than they have in the last fifteen years. Heavy, snub-nosed, fish-shaped decks grew into what they look like today. Bright colors and protective hardware vanished, and wheels shrunk to almost half the size of their eighties counterparts. “Mid90s” features one such eighties relic, a generic and mass-produced model bearing the message “COW-A-BUNGA,” which the young protagonist, Stevie, buys from his thuggish older brother. “That skateboard is eighties as fuck,” one of Stevie’s new friends observes, as Stevie looks down at something called a lapper—an angled piece of plastic clamped over the back truck to get novices up over curbs.

When Stevie is gifted a new deck at the local skate shop, he stands at the workbench as the gang’s elder (played by the pro skater Na-kel Smith) covers it with a single sheet of black grip tape, then trims the excess with a razor. The scene speaks to the skate-history precision of Hill’s movie. The lighter, grip-covered boards were more conducive to technical tricks, which in the nineties grew exceedingly difficult. Moves from the previously mocked freestyle world were incorporated into street. The kick flip evolved into a double-axis or full-rotation flip, a.k.a. the three-sixty kick flip, and from there into ever more intricate variations. These tricks were developed on flat surfaces and then quickly brought off on stairs, curbs, benches, ledges, and, finally, handrails. Skaters started linking them together in flowing combinations, and soon top riders were doing these maneuvers off higher, longer, steeper surfaces.

Skaters and skate culture, through art, music, and fashion, shifted from mutely insular to aggressively separatist. Graphics changed from skulls to cartoons, albeit ones with Lynchian qualities and occasional racist, satanic, or pornographic themes. Skate videos were scored less with punk and rock and more with hip-hop. Spandex and bright patterns were replaced by huge canvas earth-tone pants, sold for fifty dollars by brands like Fuct and Droors—a label favored in “Mid90s” by Fuckshit, the gang’s loose cannon (played by the amateur skater and onetime Vogue model Olan Prenatt). With few ramps and much fewer parks, skaters poured into public spaces, seeking paved areas free of car and pedestrian traffic, places that were municipally ignored. As graffiti artists and the homeless also congregated, and portable stereos boomed the music that infiltrated nineties skate videos (which Hill tapped for his film’s perfect soundtrack), these spots became the vibrant epicenters of a subculture’s new subculture.

Brooklyn Banks was already one such mecca, but, in the nineties, photos and footage surfaced from places like Love Park, in Philadelphia, and the West L.A. Courthouse, in Santa Monica, where the film takes place and where Hill grew up skateboarding. “I suck at skating. I always sucked,” he said. “But I did it every single day, and it was to be around that vibe, that ethic.”

The film’s principal cast members are skaters. One of them, Ryder McLaughlin, smashed his face on a handrail soon after he was cast as Fourth Grade, the crew’s videographer. He sent Hill a bloody selfie.

Two of the cast members had never acted, though Hill wasn’t concerned. “Look at any kid’s Instagram,” he said. “All skaters do is film each other. I knew they’d be comfortable in front of the camera” “Mid90s” premièred last month, at the Toronto International Film Festival, and received a standing ovation. Two weeks later, Hill held an L.A. screening for a few pros and the staff of Thrasher magazine. “This was not made from authority,” Hill told a packed house of industry people. “It was made from admiration of something that came into my life when I needed it.” After the screening, the seminal nineties pro and handrail pioneer Chad Muska posted the following on Instagram: “Our community can be very protective of our culture and quick to judge anything that presents us outside our normal environment. . . . It is hard to explain in words the importance of the friendship and family that us street skaters had back in the 90’s. . . . Whether rich or poor, no matter what ethnicity you were, it didn’t matter, as long as you loved skateboarding you were part of this family. . . . Jonah captured this truth in such a beautiful way.”

“I was really emotional after that screening,” Hill said. “Because if it failed I would be shunned by a culture that really raised me and gave me an ethic and a point of view,” he continued. “But, then, how do you pay respect to something properly if you don’t try?” Forty-five minutes into the interview, a member of either Hill’s or the film’s publicity team entered the boardroom and stood with her hand behind the door.

She smiled but didn’t. Hill continued, “We were allowed to make a movie about all different cultural kids skating at the courthouse, talking to each other. There’s no hook. And that’s beautiful. That’s so nice.”

Early in the film, Stevie enters the skate shop and eavesdrops as the crew plays an incest-themed game of “Would You Rather?” “It’s gnarly,” Hill says. “And I did that because you either go, ‘That’s it for the rest of my life’ or ‘Get me the fuck out of here.’ It’s one or the other.” In the film, an irate customer walks out. But for Hill, who was Stevie’s age when he got hooked, the skate shop was it. “For me, it was how different skateboarding was from everything else, and how that made me feel comfortable,” he said. “It deserves to be celebrated, you know? I hope I did everyone right.”

Trump wants to execute drug dealers. But he may pardon one...

Gantz Will Not Back Applying Israeli Sovereignty to Areas With ‘Many...

RT Says Its Correspondent in Venezuela Received Threats After Tweets About...