Home Culture Juleen Compton, a Director and Actor Whose Career Was Tragically Overlooked | 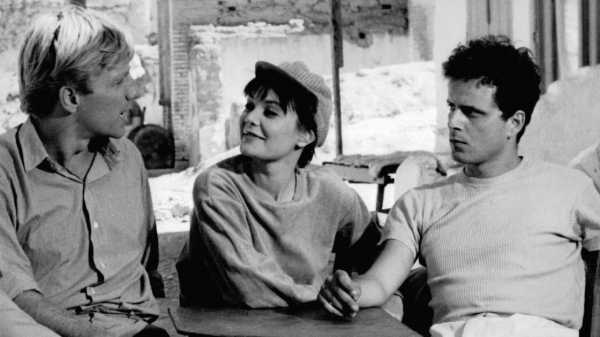 Many of the best independent filmmakers (most often, women and people of color) have been all but erased from orthodox film history, in part because of a critical prejudice that favors traces of artistry in mainstream Hollywood movies. Fortunately, bold and discerning programmers at today’s repertory houses are attempting to fill in the gaps, and one such crucial rediscovery will take place this Saturday and Sunday at Metrograph, where the first two features by Juleen Compton, “Stranded” (1965) and “The Plastic Dome of Norma Jean” (1966), will be screened.

Compton, born in 1933, was a trained and experienced actress with little career success to show for it. She became active in New York real estate, became wealthy, founded a theatre company, and self-financed these two movies. (Maya Montañez Smukler’s essential new book, “Liberating Hollywood: Women Directors & the Feminist Reform of 1970s American Cinema,” from Rutgers University Press, is a crucial source of information about Compton.) Dividing her time between New York and Europe, Compton made her first film, “Stranded,” in Europe—mainly in Greece, a bit in France—and, in the process, caught the aesthetic currents of the time, which carried her to rarefied artistic heights.

“Stranded,” which Smukler calls “autobiographical,” is a flamboyantly melodramatic yet playfully comedic story about an American woman named Raina—played by Compton—who is on a European spree. Glamorous aerial shots of the Acropolis are followed by Raina, in a mod dress and a dramatic hat, literally running away, in this showy setting, from an actory-looking man named Jeff (Ken Gaherity) and orders him not to follow her, quoting Barbara Bel Geddes from Alfred Hitchcock’s “Vertigo”: “Stupid, stupid, stupid!” She dashes, then sashays, through ancient streets, the romantic drama drolly tweaked by the presence of a fluffy dog that romps beside her. It follows her, in a series of spectacular overhead shots, to a nearby beach, where she nearly drowns but is rescued by a passing man and then complains—in keeping with the old joke—“Look, I almost lost my hat.”

From the start, Compton plays an iridescent game of shifting tones that makes “Stranded” an exemplary expression of cinematic modernism. The melodramatic mode—and the American-in-Europe subgenre—was popular with Hollywood studios in their declining years (from the late fifties through the sixties), and it also became a trope of European directors, and, in particular, of directors of the French New Wave. In effect, Compton went to Europe and made a New Wave film, a personalized and aestheticized refraction of this genre that both nods and winks at its conventions and uses them as a springboard for personal expression.

“Stranded” is the story of a woman who pursues personal and sexual freedom without restraint and without regret—and a story of the tawdry elegance of the fallen bourgeoisie living like freewheeling aristocrats in the bohemian margins of working-class Europe. Having broken up with Jeff (who stays behind to make a movie in Greece with an American crew), Raina takes up with another American actor, named Bob (Gary Collins) and with a French man named Olivier (Gian Pietro Calasso), a painter, who is gay. (Raina knows and unquestioningly accepts his sexuality; they both know that the more conventional Bob doesn’t know about it and wouldn’t accept it.) The three go on a cheap cruise in a grungy barge to the Greek islands, where Bob and Raina’s theatrical antics—climbing on and posing among ropes high on a mast, capering on deck with their music-hall shtick—evoke both their erstwhile Broadway partnership and a romantic connection. As the three travellers dash from adventure to adventure, including donkey rides in villages, night-life rambles, a farcical experience with marijuana that’s evoked with special effects, and a furtive affair that’s realized in a quietly breathless scene. Olivier goes from humiliation to humiliation, and Raina finds her own identity thrown back at her in an astounding sequence in a night club where she’s the only woman and is coaxed to dance for the men in the house.

Compton’s view of the tensions and aggression of gender is expressed in her bold aesthetic sensibility, as in that dance scene, where she distills Raina’s anxiety and defiance into a thrillingly confrontational gaze into the camera. Soon thereafter, wandering touristy streets with Bob and Olivier, Raina declares that she’s “tired of being the only girl” and, in a brazen wink at “Jules and Jim” (done with a cinematic trick of overt New Wave inspiration), she emerges dressed in a cap and trousers reminiscent of the ones made famous by Jeanne Moreau in that film. Meanwhile, Bob urges Raina to return home and “settle down” with him to the United States, where he has a good office job awaiting him (thanks to his father). It’s not much of a surprise or spoiler to suggest what she thinks of that idea—yet the sequence in which she makes it clear to him, and breaks up with him, is done with a cool and stunning swiftness that doesn’t stint on the melancholy, in a deft and dashing bit of cinematic understatement.

In “Stranded,” Compton proves herself to be a directorial stylist of the first order, blending melodrama, comedy, and a complex spectrum of emotions in starkly composed and richly textured images, with highly expressive angles and tensely isolated gestures. Her script is filled with sharp moments of aphoristic insight and powerful yet fleeting emotional spikes—and her own extraordinary performance is one of her prime inventions. She places herself boldly in a tradition of director-stars that includes Charlie Chaplin and Erich von Stroheim, Orson Welles and Jacques Tati, and her blend of the imperious and the ingenuous, of the determined and the resigned, of the impetuous and the farsighted (as well, simply, of the comedic and the dramatic) places her work alongside the art of such contemporaries and near-contemporaries as Jean Seberg, Shirley MacLaine, and Judy Garland.

According to Smukler, Compton intended to launch her acting career with this performance—and it should have worked. Compton’s sense of urgency is planted in the film itself, when Olivier, planning to devote himself more assiduously to his painting, declares, “I must work now, while my generation is important; I must work now, before it is too late.” “Stranded” played at the Cannes Film Festival (albeit not in competition) and, Smukler reports, was shown in Paris, but it had little impact in the United States. (In the 1975 book “Women Who Make Movies,” Sharon Smith writes that the movie nonetheless made its money back in its European release.) Compton kept working, and made her second feature, “The Plastic Dome of Norma Jean,” in 1966. It’s a paradoxical film, one that’s also in the avant-garde of the tone of the times. Its subject is fame, which, even as it eluded Compton herself, loomed as a temptation, an aspiration, and, as she recognized, a danger.

Norma Jean (Sharon Henesy) is a teen-ager in rural Missouri, who joins her boyfriend, Vance (Robert Gentry), a singer-songwriter, on a bold or foolhardy project. He has purchased the plastic dome of the title, a huge tent that he’s going to erect in a desolate rock-sheltered plain and in which he plans to perform. As if seeking a good augury for his venture, Vance asks Norma Jean to get one of her “feelings” about it—she turns out to be endowed with the gift of clairvoyance, and, from atop the enormous crate containing the dome, she envisions and virtually conjures an itinerant rock trio of three young men (one is played by Sam Waterston, in his first movie role), who instantly make Vance part of a quartet. But, when the concert series fails, the men (particularly the most aggressive of the group, named Bobo, played by Marco St. John) urge her to convert her clairvoyance into an act.

Against her better judgment, she does so, and, when she offers her audience a tip on several local calamities (including, in a twist borrowed from Billy Wilder’s “Ace in the Hole,” the drama of a young man trapped in a cave), her act becomes a hit. Suddenly, local politicians and businessmen are swarming around her and the male foursome with plans to make the dome—hitherto an object of derision, even of hostility—a tourist attraction. As lawyers and journalists descend upon the town and pressure Norma Jean, and as her celebrity goes nationwide, she becomes increasingly exhausted, even endangered, by her visionary exertions, and seeks to escape.

The playfulness of “Stranded” here bursts into the realm of fantasy, both in the tale’s supernatural element and in some whimsical sidebars that are nonetheless tinged with tragedy. Compton develops a similarly bold repertory of images, replete with spectacular overhead shots, crane shots, and expansive landscapes, and ranging from closely textured complexity to graphic starkness. “The Plastic Dome of Norma Jean” is the contemporary of a vaunted classic of rock-driven fame, Michelangelo Antonioni’s “Blow-Up,” and does a better job of reflecting the eerie chill of media-centric and technologically governed modernity—and reflects all the more clearly the central place, and victimhood, of female genius in the creation of modernity.

Compton’s art endures, but her efforts to make a career were in vain. Smukler suggests that Compton’s ability to self-finance her films also made her less aggressive about promoting and releasing them (because the filmmaker felt little pressure to earn her investment back). What’s more, Smukler details the infuriating obstacles that Compton faced, after making these films, when she tried to go to Hollywood to pursue a directorial career. Encouraged to get a foot in the door as a screenwriter, she sold some scripts, but few were produced. Smith wrote that Compton was working on a documentary called “Women in Action,” “a history of women directors in Hollywood,” but there’s no trace of it. Compton made one more feature, “Buckeye and Blue,” from 1988—a Western, starring Robyn Lively in the role of a young woman who commands a crew of train robbers. But it’s not at the level of imagination or invention of her first two films. The artistic timing—of the sort that she placed in the mouth of the artist Olivier in “Stranded”—was off. The near-invisibility of Compton’s films and the truncation of her career are tragedies.

India Dismisses US Claim of ‘Game Changer’ Drug to be Effective...

A New History of Arabia, Written in Stone |