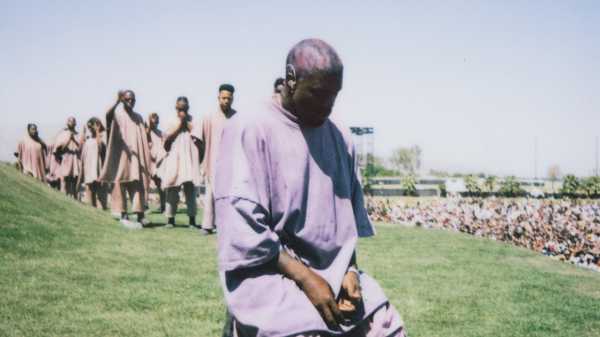 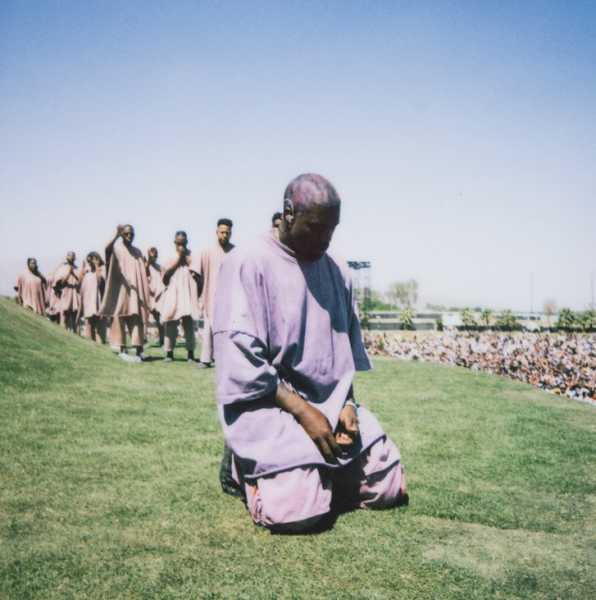 Perhaps Kanye West is dipping his toe in the church-as-business waters. It also seems possible that Sunday Service fills a deeply personal need.

On the first Sunday of 2019, Kim Kardashian West assumed a new position as the unofficial head of communications for a pop-up church experience called Sunday Service, which was created by her husband, Kanye West. She pointed her sixty million Twitter followers to a series of videos that she was posting on Instagram Stories; they showed a seemingly phosphorescent choir, in a large studio flooded with ultraviolet light, singing startlingly beautiful gospel renditions of songs by West (“Father Stretch My Hands,” “Lift Yourself”). “Just hearing music as our Sunday Service was super inspiring,” she tweeted later, adding “See you next Sunday” and a sparkle emoji. Every Sunday since, West has put on, and his wife has promoted, a small, invite-only musical gathering, sometimes held in a room saturated with monochrome light, sometimes in a verdant field in Calabasas. Attendees have included Katy Perry, Courtney Love, Rick Rubin, Diplo, Busy Philipps, and Tyler, the Creator. (Kardashian West’s sisters and their children come, too.) Choir members wear matching outfits, which look like the sweats that West makes for Yeezy, his high-end fashion line; every week, they put on a new color, forming a pulsing block of white or black or periwinkle or “pill yellow.” The entire effort has an extravagantly normcore and vaguely cultlike vibe. “There’s no praying,” Kardashian West told Jimmy Kimmel, on his late-night show. “There’s no sermon. There’s no word. It’s just music, and it’s just a feeling.” Her sister Kourtney clarified that Sunday Service is, in fact, a Christian thing.

Everyone who attends Sunday Service has to sign a nondisclosure agreement, but attendees seem free to share their experiences through Instagram videos. In one such video, you can—contrary to Kardashian West’s description—watch DMX leading a prayer. In March, Courtney Love posted a video of West performing “Jesus Walks,” a single from his début album, with the choir stomping and singing the song’s a-cappella hook. West sounded good—agile and alert and formidable—which came as a relief to many who have observed his behavior over the past few years with growing worry. Back in 2016, West cancelled the second leg of his Saint Pablo Tour and was hospitalized. When he reëmerged, he often seemed, if anything, more erratic than before, and took to saying things like slavery “sounds like a choice.” Last June, he released a slight album, called “Ye”—a diminutive of Kanye—by flying a group of influential people to Jackson, Wyoming, for a listening party; on the way there, he made the album’s cover art, a photo of the Tetons with the phrase “I hate being Bi-Polar its awesome” scribbled on it in neon green. “I believe ‘ye’ is the most commonly used word in the Bible,” West said in an interview. It’s not, but you see where this is going.

God has always been all over West’s music—the gospel-adjacent soul samples, the ever-present sense of glory and revelation—in a way that alternately suggests worship and subsumption. In “Jesus Walks,” he positions himself as a prophet as well as a supplicant. The hook samples the Harlem-based Addicts Rehabilitation Center Choir, and West invokes Christ’s ministry to all, regardless of their past or their station: “To the hustlers, killers, murderers, drug dealers, even the strippers / Jesus walks for them.” West has a blindingly vivid messiah complex; he also has an obsession with iconoclasm that has led him all the way to the idea that slavery was voluntary. A decade ago, he told an interviewer, “I don’t wanna fuckin’ be Christ-like. I want to be me-like.” Later, in an attempt to clarify his remarks, he said, “My entire life, being an African-American, Christianity was forced down my throat.” In Love’s Instagram video, we hear West rap, “I hope this take away from my sins, and bring the day that I’m dreaming about / Next time I’m in the club, everybody screaming out”—“Jesus walks with me,” the choir chants. Love tagged the post “#kanye” and also “#jesus #god #calabassas #gospel #holyspirit #transcendent.”

West has suggested that Sunday Service will soon come to an end, but, on Easter Sunday, which was also the last day of Coachella, he held a drawn-out Sunday Service at 9 A.M., on a sod-covered hill on the periphery of the festival’s campgrounds. The event was live-streamed, in an absurd fashion, through a peephole camera; watching it felt like wandering dizzily around a very luxe cult gathering with two paper-towel tubes glued to my eyes. The choir wore mauve and tramped up the hill in winding single file. As many people observed on Twitter, the morning’s aesthetic had a Teletubbies feel, and the choir resembled the Tethered, from the movie “Us.” A dense crowd, fenced off from the performance, covered the surrounding grass. 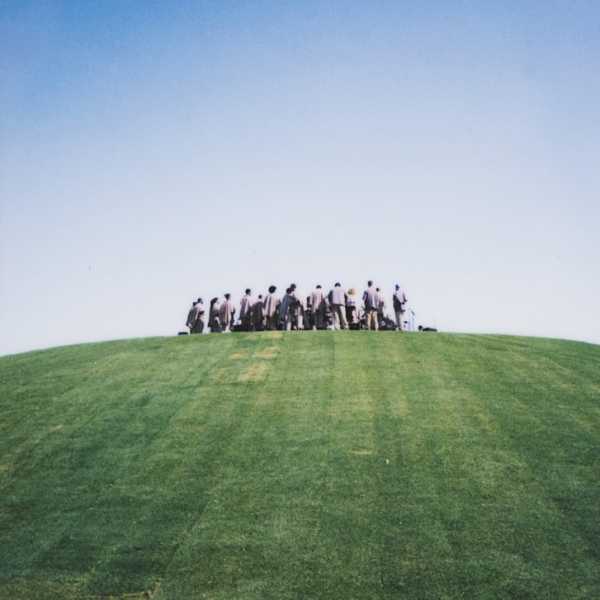 The obvious explanation for Sunday Service is that it’s album promotion. Last fall, West announced a ninth album, called “Yandhi,” and he has performed two “Yandhi” tracks at Sunday Service. (West previously shifted his wife’s wardrobe from a colorful bottle-service aesthetic to sci-fi-style Yeezy neutrals. It’s easy to imagine him issuing monochromatic dress codes for a “Yandhi” tour.) In an interview with TMZ, West explained that “Ye” had been an act of “superhero rehabilitation,” meaning, presumably, that it was like the part of an action movie where the avenging champion retreats to his lair to regain his strength. On the “Ye” track “Yikes,” he calls his bipolar disorder a superpower; last December, he declared, on Twitter, that he could not make “dark fantasy level music” when he was taking meds. With “Yandhi,” he said, he was getting “fully back in mode, off of medication.” As for the MAGA hat he’d been wearing, he added, it “means I’m being me and I’m punk and I can wear whatever I want ’cause I’m a god.”

There’s a suspicion in some corners that West, who has recently begun making appearances on “Keeping Up with the Kardashians,” may be borrowing another idea from his wife’s family by starting a church. Churches, these days, can be a glossy business proposition. Hillsong, best known for its celebrity-packed Los Angeles congregation—its pastor, Carl Lentz, famously baptized Justin Bieber in the N.B.A. player Tyson Chandler’s bathtub—pulls in more than a hundred million (mostly tax-exempt) dollars per year. In 2009, Kris Jenner, West’s mother-in-law, co-founded the California Community Church, which operates mostly out of a Sheraton hotel in Agoura Hills. The California Community Church is led by a pastor named Brad Johnson, who resigned from his previous pulpit after revelations that he’d had an extramarital affair. Jenner tracked Johnson down at his subsequent job as a Starbucks barista, persuaded him to lead her new church, and got him to officiate Khloé Kardashian and Lamar Odom’s wedding on TV. (When Johnson later married the woman with whom he’d had an affair, Jenner officiated.) The California Community Church, which has already got into some tax trouble, asks congregants to pledge either a thousand dollars per month or, as is typical of many Christian churches, ten per cent of their income. In old interviews, Kardashian West has reiterated her commitment to tithing. (“Every year. Absolutely,” she told Piers Morgan.) In 2013, she sent her mother’s church almost fifty grand.

Perhaps West is dipping his toe in these waters. It also seems possible that Sunday Service fills a deeply personal need. Though he announced a few years ago that he was fifty-three million dollars in debt, West lives in extremely rarefied circumstances these days—presumably thanks to his wife, whose net worth is estimated to be three hundred and fifty million dollars. A recent Vogue video shows their house to be a cavernous, white, near-empty, museum-like edifice; Kardashian West describes it as a “minimal monastery.” It is a stark contrast to the Sunday Service videos, which, if nothing else, are loud and full of people.

On the live stream from Coachella, West had purple hair to match his T-shirt. He didn’t enter the picture until about forty-five minutes into the performance, and he didn’t take center stage until close to the end. The choir ran through gospel standards and through gospel versions of West’s music; Chance the Rapper, who speaks and raps often about his Christian faith and shares snapshots of devotional books on Instagram, danced atop the hill. “Jesus Christ is Lord!” Chance shouted into the microphone, rapping his incandescent verse from “Ultralight Beam,” which includes the couplet “I made ‘Sunday Candy,’ I’m never going to hell / I met Kanye West, I’m never going to fail.” In the middle of the song, West started crying, and Kid Cudi comforted him. DMX, who, earlier, had said another prayer, wrapped the rapper in a hug. West seemed off while performing—a little slow, a little cloudy. After “Jesus Walks,” he sank to his knees in the grass and closed his eyes for a long time.

Like West, I grew up in a community where Christianity was presented as a mandate. I spent years, when I was younger, wishing that church could be wordless and strange; I felt the presence of God more profoundly when I was in a crowd of people listening to music—rap, in particular—than I did while listening to a pastor speak. I also saw, after a decade inside an evangelical megachurch, how quickly a genuine hunger for salvation and community could be converted into cash and self-aggrandizement. West’s audience—his curated guests, his festival acolytes—have been primed by our cultural moment to overlook the deep bleakness of invite-only worship, of a two-hundred-and-twenty-five-dollar bleach-stained sweatshirt that’s supposed to promote God and Kanye at the same time. But, even worse, many of them are surely drawn to Sunday Service out of some sort of meaningful longing: these young people who can afford to pay four figures to behave badly and photograph well in the desert are pursuing absolution, too, in their way. So many things today seem, upon reflection, like a cry for help disguised as a demonstration of cultural capital. At his most courageous, West has seemed hallowed because of how purely he expressed a real hunger. In 2008, he recorded a live album in London, with an all-female string orchestra, called “Late Orchestration,” which includes a rendition of “Jesus Walks.” I’ve been rewatching that performance. It’s sublime and agonized, and full of the sort of miraculous devotion that I used to hear about in church.

Iran Inching Closer to Bidding Farewell to US Dollar