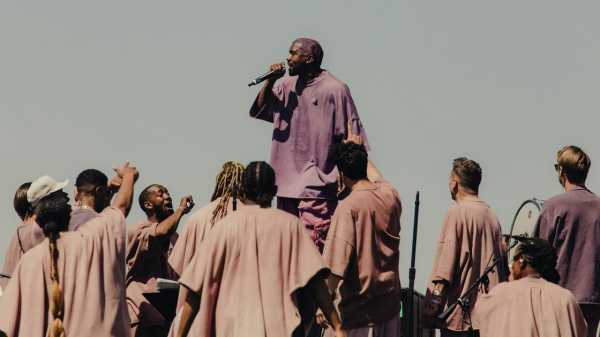 On his groundbreaking album “Yeezus,” from 2013, Kanye West made his most ostentatious declaration yet: “I am a god,” he announced, on a song of the same name. He deified himself with such confidence that he spoke this status into being. As a tormented genius who’d defied expectations and successfully transformed himself from a pesky, overconfident beatmaker to a rap icon and footwear-industry titan, West was as close to a secular god as there was, with millions of worshipful followers behind him. But plenty has shifted in the past six years, a period marked by some successes for West but also by debt, mental illness, hospitalization, and an ill-conceived alliance with President Trump. West has also been drawn into Shakespearean feuds with Drake and Jay-Z, and, in 2018, he executed an especially shaky rollout of “Ye,” his weakest album and one that opened with a monologue about his fantasies of killing a loved one in cold blood. After “Ye,” West promised another album, called “Yandhi,” which was surely meant to be a course correction. It never materialized. And then came the unthinkable: radio silence from West, once our most relentlessly outspoken star.

If West once imagined himself as a religious figurehead, now, in the wake of career-threatening turbulence, he’s assumed the role of humbled disciple. At least, this is the conceit of “Jesus Is King,” West’s new album and a document of an alleged spiritual awakening. Religion has always animated West’s music, in flashes: one of his earliest hits was “Jesus Walks,” and he described his record “The Life of Pablo,” from 2016, as “a gospel album with a whole lot of cursing.” In this new era, though, Christianity is his raison d’être. Kanye the luminary has become Kanye the missionary: “You won’t ever be the same when you call on Jesus’s name / Listen to the words I’m sayin’ / Jesus saved me / Now I’m sane,” he raps on “God Is,” one of the album’s many simplistic paeans to the power of religion.

At the beginning of this year, West began hosting weekly, mainly invitation-only gatherings forged from this spirit of salvation, which he dubbed Sunday Services. Attendees included a gospel choir, a host of musical collaborators, West’s family and friends, and a rotating cast of celebrity interlopers. Each week, the musicians were supplied with West-designed uniforms—oversized, monochromatic garments that invited comparisons to the caftans worn by the Rajneeshpuram cult on the Netflix show “Wild Wild Country.” (West may have submitted himself to Christ, but he never did surrender his desire to lead and direct others.) These religious jam sessions were largely private, but a trickle of social-media content—and also a special edition of Sunday Service that was live-streamed from Coachella, in April—hinted that West perhaps was onto something. The rich, familiar sounds of a black gospel choir in concert with West’s secular samples and on-the-fly beatmaking sounded fresh and aesthetically sanctifying, if not spiritually so.

The best parts of “Jesus Is King”—which is a breezy eleven songs and only twenty-seven minutes long—are those that recall the Sunday Service sessions and their maximalist, gospel-choir glory. This choir is a far more effective mouthpiece for spiritual reconciliation than West is, and yet West uses it too sparingly. Unlike his most recent albums, which featured guest singers and samples heavily, if not overwhelmingly, “Jesus Is King” foregrounds West’s voice. His rapping has always been a handicap, one that he compensated for with excess bluster and humor. But, as part of his reformation, he has gone so far as to renounce profanity. These newfound constraints leave his rapping especially vulnerable, forcing him to become, at times, a literalist shouting in all-too-simple terms about the power of Christ. His attempts at metaphor land with a thud: “Closed on Sunday, you’re my Chik-fil-A,” he raps on “Closed on Sunday.” Later in the song, he declares that he is “No more livin’ for the culture, we nobody’s slave.” Calling himself a god helped turn him into one, but declaring himself pure doesn’t have the same power of manifestation.

If West has a true salvation, it is his enduring ear for beats and his taste in collaborators. Sonically, “Jesus Is King” flows smoothly from the exhilarating mood boards of his previous albums, which rendered gorgeous and inimitable tapestries of soul, house, gospel, and hip-hop. Very few producers can pull off tone shifts the way that West can, and, on “Jesus Is King,” he makes bracing transitions between the mystical and whispery chants of the choir and the thunder of his bellows and electronic-drum samples. West has expressed grandiose ambitions to overtake the worlds of fashion, interior design and architecture, and even education. But recent years have proved that his talent as a producer is the true bedrock of his legacy.

One thing that West has accomplished in the past decade is helping to legitimize dilettantism. His Internet-friendly, A.D.H.D. aesthetic impulses and his tendency to bounce from one interest or one musical style to the next, declaring everything in his wake as passé, amounted to a profoundly thrilling ethos. The clashing and splintering of his interests created a modern kind of complexity. But this approach gets complicated when moral and ethical concerns are added to the mix alongside aesthetic ones. During the recording sessions for “Jesus Is King,” West asked participants to fast and refrain from premarital sex. In recent interviews, he has renounced social media, written off Hollywood as a toxic wasteland, and chastised women who dress too provocatively. On the album, he states that “Jezebel don’t stand a chance.” (This is a serious but not exactly convincing transformation from a self-proclaimed former sex addict who once served as creative director of the Pornhub Awards.) And this shift might be part of yet another one of West’s fleeting fascinations. “I am not a theologian—I am a recent convert,” he confessed in an interview with Apple’s Zane Lowe last week. Shaping and controlling the taste of his audience has always seemed to come easily to West. Recasting himself as a moral guide will be a greater struggle.

Quantum Blockchain: How Physicists Will Stage a Cryptoworld IT Revolution

How President Donald Trump plans to take $15 billion in federal...

What no one tells new moms about what childbirth can do...