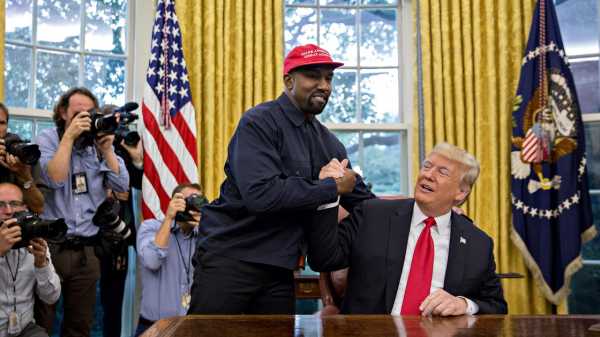 “Because, in an alternate universe, I am him,” Kanye West said on Thursday afternoon, as he held court before a throng of reporters and photographers in the West Wing. The President and Jared Kushner had invited him to the White House for lunch. A MAGA hat, that red billboard of fascist fast fashion, sat on his head. With the word “him,” West could have been referring to Trump, whom he had greeted with a bear hug, and whom he gazed at now with pure admiration leaking from his frighteningly wide eyes. In fact, he was referring to Larry Hoover, the Chicago gang kingpin, who is currently serving six life sentences in prison for crimes including murder. West had come to D.C., ostensibly, to have a frank talk about “Chicago violence,” and to advocate for clemency for Hoover, whom he argued was being unjustly made to pay for his ability to organize the black man’s power.

West’s ten-minute monologue darted chaotically from allusions to Freud and Tesla to claims that he had been misdiagnosed with bipolar disorder. But one theme he kept returning to, during the tirade and in response to journalists’ questions, was that of the disempowered black man, revived and ready to vanquish the enervating effects of women’s influence. He talked about not having “a lot of male energy” in his childhood home or in his adult one, and feeling that Hillary Clinton’s “I’m With Her” campaign alienated him “as a guy who didn’t get to see my dad all the time.” West said, positively gleaming, that he loved the MAGA hat because it made him feel like Superman. “You made a Superman cape for me,” he said to Trump, who sat across from him, looking stunned yet satisfied.

West’s tone was one of guileless amazement. But these comments openly flirted with the poisonous rhetoric of the men’s-rights movement. West has expressed beliefs that overlap with M.R.A. ministrations before. There was his defense of Bill Cosby, whom he judged innocent in a tweet in 2016, and, more recently, there was his impromptu address on “Saturday Night Live,” where he professed fidelity to Trump, and parroted the conclusions of Daniel Moynihan’s warped report “The Negro Family: The Case for National Action,” from 1965. “Actually, blacks weren’t always Democrats,” he said. “It’s like a plan they did to take the fathers out of the home and promote welfare.”

The men’s-rights movement proceeds from white-supremacist ideals, but it is vast and, in the internet era, it is spreading—“Very scary time for young men in America, when you can be guilty of something you’re not guilty of,” Trump said earlier this month, alluding to the sham F.B.I. investigation of Brett Kavanaugh. White men’s-rights activists believe, among other things, that the women who once were rightfully theirs have been lured away by the sexual power of black men, and they have appropriated the language of the oppressed to articulate this.

The black M.R.A. is a more slippery actor. His grievance isn’t that he is losing male privilege; it’s his belief that he was never endowed with it in the first place. He may frame his relationships with women—and, in particular, with white women—as a sort of reparation. West, who has explored the idea of sexual deprivation in his art (“thirty white bitches,” he fantasized on “My Beautiful Dark Twisted Fantasy”), has long trotted out his wife, Kim Kardashian-West, as the ultimate evidence that he has overcome the station of his birth. The feeling that he gets from being with her, one suspects, is the same one he gets from being with Donald Trump. The sense of inflation, of exceptionalism.

West—seated in the West Wing next to Jim Brown, the former N.F.L. wide receiver whose charity work has obscured his record of alleged domestic abuse, which he has, over the years, routinely denied—relishes Trump’s recurring claim that he is his best ambassador to the “black community.” And, Trump, no doubt, gets a kick out of diminishing Obama’s ritual of bringing rappers to the White House. The wider West gesticulated, the wider Trump smiled. But all of this is just what happened this afternoon. I am hesitant to force a coherent narrative of any kind onto the life and times of Kanye West, who in any case thinks that “time is a myth.” Once, West’s unpredictable behavior was shocking; by now it is utterly banal. Later on Thursday, a reporter on Twitter shared photographs of the celebrity standing on a table at an Apple Store in D.C., delivering an unauthorized keynote. He said that he was “going to Africa.”

Russian Satellites to Monitor Iran After Attack on US Bases, Plane...

Wayne Rooney wants to go into management when playing days at...

What a Day for Navies: US Commissions 1 Nuclear Sub, Russia...