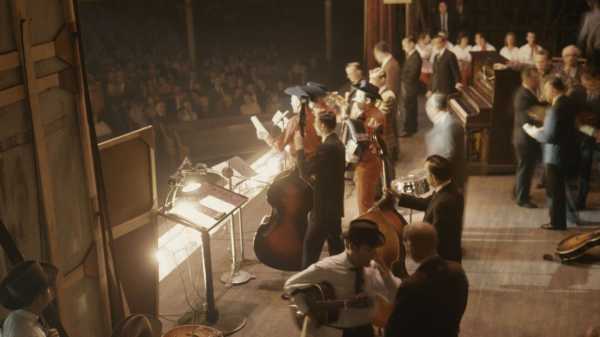 Almost exactly halfway through “Country Music,” Ken Burns’s new series—which premières on Sunday, on PBS, and consists of eight two-hour installments that are, somehow, still not enough—viewers get the chance to linger, for a few moments, over the time that Willie Nelson wrote a hit for Patsy Cline. It was 1961; Nelson had thought to call his song “Stupid,” but soon changed its refrain to something that was both more evocative and easier to sing: “Crazy.”

In the studio, Cline had trouble, at first, abandoning the angular way of phrasing the tune that she’d learned while playing and replaying Nelson’s demo at home. Then her producer, Owen Bradley, fashioned an intimate country-pop arrangement of the song, drawing not only on Nelson’s Tin Pan melody, and Cline’s supple and sultry reading of his lyric, but also on sounds that, only a few years earlier, wouldn’t have seemed “country” in the least: jazzy lounge piano, played by Floyd Cramer, and backing vocals from the Jordanaires, who’d been singing on Elvis Presley records for half a decade. It became a massive country hit, a Top Ten pop single, and Cline’s signature recording. All these years later, you can still witness rooms briefly hush when Patsy Cline’s “Crazy,” with its intimate, insistent vulnerability, plays. Watching the careful construction of Cline’s hit in “Country Music,” and thinking of the times I’ve seen that hush fall upon a crowd, I was reminded of how often it’s not just songs that people fall in love with but, rather, specific studio recordings. “It all begins with a song,” they like to say in Nashville. But that old saw is true only to the extent that we lean hard into “begins.”

Country attracts all kinds of not-quite-true clichés like that one. Devotees and detractors alike are prone to describing country as “traditional,” yet the most persistent feature of its history is change. The very name of the genre obscures this: the nearly century-old tradition that today we call country has not mainly been a chronicle of lives lived in rural places; rather, it has been a perpetually updated eulogy to the passing away of rural life, delivered, primarily, by and for Americans who had long since migrated to new places on progressively newer frontiers—urban neon, suburban lawns. “Not-country-anymore music” would be a more apt name for it.

Even at this late date, some still assume that the pure origins of country music are folk songs that were brought to America from the British Isles, but country has been an essentially omnivorous genre every step of the way. It has borrowed and ripped off any lick or melody it deemed useful or fun—several generations’ worth of African-American sounds and styles most of all. Country is often perceived as standing apart from pop music, or in opposition to pop folderol, but country music is pop music: there’s virtually no period in country history when its songs and sounds haven’t been crossed over in one way or another.

In the “Country Music” première, we see how the genre was, from its very beginnings, as bound up with pop and the urban and the industrial as it was with the old and the rural. The commercial form’s first hit, in 1923, was “The Little Old Log Cabin in the Lane”—not some ancient folk ballad but a recycled minstrel tune, barely fifty years old, that was recorded by Fiddlin’ John Carson, who lived not in some bucolic holler but in Atlanta, where he’d been working in textile mills for a quarter century. In another memorable set piece, we spend a few moments learning about Mother Maybelle Carter, who developed an innovative way of playing her guitar— strumming the rhythm and picking out a melody simultaneously, a method that became known as the Carter scratch. Today the technique is more commonly known as the way you play a guitar.

Burns’s approach to the music is somewhat less innovative, perhaps. The dominant unifying thread that runs through the series is one connecting Johnny Cash back to the “first family of country music,” the Carter Family, via his second wife, June Carter, and extending forward to his eldest daughter by his first wife, the hit-making singer-songwriter and Americana pioneer Rosanne Cash. This is exactly the narrative thread that viewers with even just a so-so knowledge of the genre might have predicted. And Burns, too, regrettably allows “realness” to become a refrain: one talking head after another goes on about how this artist or that song is great because they are “real” in one way or another. Country music has played with artifice and persona straight along—“Man in Black” is as overt and deliberate a construction as you will find in popular music—and talk of authenticity, in the context of country, or any other art form, is almost always a category error. It tends to privilege stormy emotions over sunnier ones and sparer sounds over more obviously gussied-up performances: “less is more” becomes mistaken for “less is more real.” An embrace of such appealing but silly mythologizing is to be expected, perhaps, from a passionate new convert like Burns, who has admitted that he didn’t know much about country music before beginning the project eight years ago.

But even the most exacting country-music fans will find themselves repeatedly delighted: by the music, for starters; by the Who’s Who of luminaries who talk us through the history, including the late Merle Haggard and Little Jimmy Dickens, giving what must have been among their final interviews; by the rare footage and artifacts; and by the many unexpected but smart narrative choices. Burns wisely foregrounds bluegrass music, which is too often caricatured as hidebound and relegated to a single chapter in genre histories. In the third episode of the series, we are introduced to Bill Monroe not only as “the father of bluegrass” but as a postwar innovator on par with that better-known country modernist, Hank Williams. And subsequent episodes trace Monroe’s high-and-lonesome legacy, weaving in the career threads of Monroe’s fellow bluegrass inventors Lester Flatt and the banjo wunderkind Earl Scruggs. The charismatic Marty Stuart, who began his career, at thirteen, playing in Flatt’s band, and remains one of country music’s great ambassadors, is a near-constant presence in the series, serving a role roughly equivalent to the one that Buck O’Neil played in Burns’s earlier series, “Baseball.” And Ricky Skaggs, who, in the eighties, brought Monroe’s bluegrass drive to mainstream-country radio, is another essential talking head. (One hopes that viewers will be enticed to take a deeper dive into bluegrass by checking out “Big Family: The Story of Bluegrass Music,” which first aired at the end of August on PBS, and can be streamed online.)

Burns also elevates Rose Maddox, the brash front woman of the mid-century California country-boogie band the Maddox Brothers and Rose (billed in their postwar prime as “America’s most colorful hillbilly band”), to the prominent position within the genre that she’s long deserved. Her band’s raucous and rollicking attacks paved the way for the rock and roll to come, as well as country’s rock-and-roll-influenced Bakersfield Sound. She was also a strong-minded exemplar in a country-music period with far too few women stars.

The debt owed by country music to African-American artists is regularly underscored, too. We hear often about Arnold Shultz, Rufus (Tee-Tot) Payne, and Lesley Riddle, black men who served as mentors to Bill Monroe, Hank Williams, and A. P. Carter, respectively. The erudite observations and enthusiasm of Rhiannon Giddens, the esteemed vocalist and banjo player who’s working to both revive and update the string band as a contemporary black form, are invaluable to the series, and “Country Music” rightly celebrates Ray Charles and Charley Pride. But the silence and hostility with which African-American performers have often been greeted by the country establishment needs even greater emphasis. For instance, while country-music trade organizations drafted on Charles’s tremendous pop-radio success with country material, offering his success as proof to advertisers and radio stations that the country audience had taste and disposable income to spare, country stations declined to play his singles, no matter how much they sounded like the other Nashville-sound hits in regular rotation.

There are any number of other nits that a longtime student of country might pick with the film. Where’s June Carter’s first husband, the Country Music Hall of Famer Carl Smith? Why don’t we spend even more time with the work of the genre’s most accomplished and influential modern figures, Dolly Parton and Merle Haggard? And where are Jimmy Martin (who is both seen and heard but never named), Iris Dement, Riley Puckett, Don Law, Pig Robbins, and Anita Kerr, the producer, arranger, and vocalist of hundreds of remarkable country recordings, who is mentioned here only once, in a list of other Nashville-sound-era figures? Everyone will have his or her own list of omissions, inevitably. It’s a big, sprawling genre.

Indeed, even at sixteen hours, this version of country’s story is unavoidably incomplete—it concludes in the mid-nineties, with the rise of the crossover country superstars Garth Brooks and Shania Twain. But Burns doesn’t completely sidestep the existential problems faced by country today: “Country Music” ends by lamenting the fin-de-siècle mainstream radio consolidation that has only worsened in our century, resulting in shrunken playlists and exacerbating a near-absence of women’s voices, a dearth of artists of color, and a virtual ban on sonic, thematic, and generational diversity across the board.

What the documentary gets right overwhelms the caveats. Burns’s chief takeaway from his immersion in the genre is spot on: country music is not, and has never been, static. “I think there’s a paradox that has always existed in country music,” Bill C. Malone, the lone academic voice in the series and the author of the genre’s definitive history, “Country Music, U.S.A.,” says at one point. “How much change do you embrace? And how much change can you make without completely obliterating what you were?” At its best, Ken Burns’s “Country Music” works so well because it declines to present this tug-of-war between change and the status quo as a tension in need of narrative resolution. That tension is the narrative; change is essential to the tradition. Another beloved Nashville cliché, attributed to the country songwriting legend Harlan Howard, has it that country music is just “three chords and the truth.” Of course, there are more than three chords, and some songs might not tell the whole truth—but close enough. Everything else has been negotiable.

Kepa Arrizabalaga to Chelsea: All you need to know about him

Virtual influencers have got to be a fad — right?