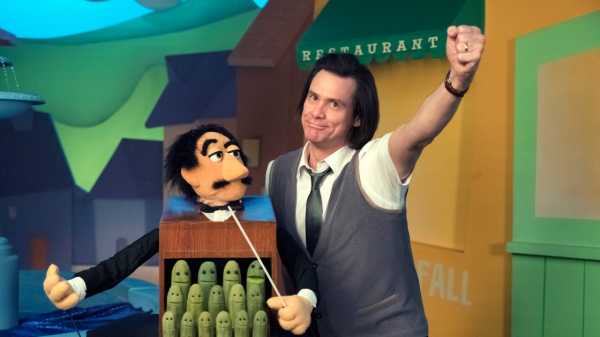 In an empathic tenor, his eyes loaded with sublime kindness, a public-television star lifts a song of loss to an audience of well-behaved children. The opening line of the tune is “What does it mean to lose a thing you really want to stay?” It’s performed on the fictional show within “Kidding” (Showtime), in which Jim Carrey plays Jeff Piccirillo, a.k.a. Jeff Pickles, the host of “Mr. Pickles’ Puppet Time,” an institution on the order of “Mister Rogers’ Neighborhood.” On air, Mr. Pickles is a steadfast, noble presence but a static character. In life, Jeff, distraught by the death of his child, is treading water, thrashing with burgeoning fury. Seeking to reconcile his public face with his private anguish and to live a lesson in accepting grief, he tapes the performance for an episode that acknowledges his bereavement. The song continues: “What if they sent your favorite socks a million blocks away?”

If Daniel Tiger were mauled by a crocodile, or if villains poached his sister for her pelt, the result might be something like “Kidding.” The show picks up a year after one of the host’s identical-twin sons, each played by Cole Allen, dies in a freak car accident. Jeff’s marriage to a nurse (Judy Greer) has collapsed, and their surviving son has fallen in with high-school stoners—he is “smoking reefer like a jazz musician,” Jeff says. Mr. Pickles’ golly-gee-willikers temperament and old-fashioned propriety are no mere façade: dropping the mask of the character, he is yet more gentle. He is uneasy sharing a chummy fist bump because it feels like an aggressive strike. His haircut is a curtained pageboy that states his freedom from vanity. “Kidding” comes close to turning this puppeteer into one of his felt colleagues—his innocence is impossible, unless he himself is on wires controlled from above by his executive producer, who is also his father, Sebastian (Frank Langella). It isn’t necessarily satisfying, on the level of human psychology, to read this patriarch as a puppet master, but it’s got potential as a parable.

Sebastian shelves the death episode, for fear that its revelation will disrupt the continuity of the series and disturb the health of its merchandising empire. “You need to understand there’s two of you,” Sebastian says. “Jeff needs to heal. Mr. Pickles is fine.” But Jeff keeps prodding “Puppet Time” toward addressing his emotional truth, sometimes threatening to sabotage the whole endeavor. During one taping, a panel at the left breast of his prop cardigan swings opens to reveal a heart-shaped puppet called Thump Thump, and Mr. Pickles rips him out from the abdominal aorta.

Through the four episodes (of the season’s ten) screened by this critic, “Kidding” has yet to manifest a coherent tone. The frank jocularity of the wisecracks bumps up against rogue jolts of cutesiness and a slightly dirty realism, familiar from Sundance dramedies. A rifle hung on the wall on Episode 2 has not yet gone off by the end of Episode 4, when the viewer starts to intimate that the unrestrained pretend-play laws of Mr. Pickles’ universe are seeping into the sphere of Jeff’s personal tragedy. “Kidding,” created by Dave Holstein, may be best appreciated as a magic-realist fable about the family unit and its values.

It is tempting to ascribe “Kidding” ’s wobbliness of tone—its skids from dark comedy to tearjerking melodrama, its conjunction of whimsy and dread—to the influence of Michel Gondry, who directs a majority of the episodes. For sure, he digs the puppets. The “Puppet Time” ensemble includes a self-strumming ukulele, an otter suited up for a space launch, and an anthropomorphic loaf of existentialist French bread named Ennui Le Triste. (The baguette is sad for reasons including his inability to whistle, which owes to the fact that his tongue is made of cheese.) One reason to hope that “Kidding” develops its surreality is that the puppets—especially Soapscum, who is a tub-dwelling gray glob with the texture of a dampish Snuffleupagus—seem likely to thrive on the kinds of fantastical planes of existence that Gondry often renders.

One also wants to attribute the slow-boil mood and occasional low-key tone of Carrey’s strong performance to Gondry, who had great success in guiding an unusually restrained turn from the actor in his 2004 masterpiece, “Eternal Sunshine of the Spotless Mind.” It’s an especially ripe role for Carrey, with its twist on an Andy Kaufman performance-art ethic of never breaking character. From some angles, Mr. Pickles is Collodi’s Pinocchio dreaming of a real boyhood; from others, he’s Peter Pan dragged screaming into puberty. Like Truman Burbank, of “The Truman Show,” he has awakened to the knowledge that he is an entertainer raised by a corporation, and he’s checking for the exits from the dome. Trapped inside a part, he’s a fraction of a man. Listen for the moments when the softness of his nurturing voice shades into a pale hush, as if he is speaking from an unreachable distance, stranded in a land of make-believe.

Where did it all go wrong for David De Gea?