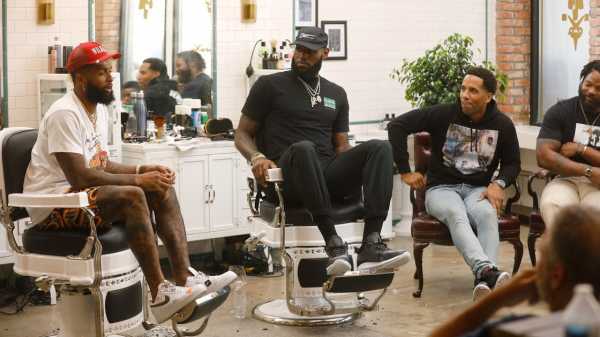 There was a period this fall when anyone who set foot in my apartment would have approximately thirty minutes before getting The Question. “Have you seen ‘The Shop?’ ” I would ask. I would go on to describe LeBron James’s new HBO show in glowing, superlative terms. If they hadn’t seen it, I would insist that we watch it. If they had already seen it, I would insist that we rewatch it. When I needed some comfort and entertainment, I would replay choice clips.

I never expected that my favorite episodes of television this year would come from James, the newly minted Los Angeles Laker, who may very well go down as the greatest basketball player of all time. This was the year, after all, when the media—and writers like me—decried the pallid state of celebrity journalism, which is being continually usurped by hyper-famous, perception-conscious stars who have the capacity to tightly control their own images through social media. Traditional media now needs celebrities more than the celebrities need traditional media, and that imbalance of power is reflected in much of the coverage. “Make it stop!” I would say every time I read another A-list Hollywood actress doing a banal interview with one of her closest Hollywood friends in the pages of a glossy magazine. I was disappointed by Serena Williams’s mundane documentary series, “Being Serena,” which hardly opened the curtain on one of the world’s most maddeningly enigmatic superstar athletes. Theoretically, “The Shop” should have been yet another affirmation of our worst suspicions—that we would only ever get to see our superheroes in sanitized, strictly controlled ways.

But James has offered a potent rebuttal to the argument that celebrities can’t make interesting, revelatory content about themselves and their colleagues. On the show, he invites notable entertainment figures—fellow-professional athletes, rappers, and comics—to sit in the chairs of a slick barbershop. It’s a gimmick designed to generate the sense of candor, camaraderie, and intimacy that happens inside African-American barbershops. And it works. Seated in the barber chairs, wearing cover sheets to wick away loose hairs, these guests are seemingly able to let their guards down and have genuine conversations about the issues that plague and delight them: race, family, sports, entertainment, aging, motherhood, politics, and the demands and challenges of being in the spotlight. Watching the show is like being invited into a lively group text thread between acquaintances whose commonality is fame, but who have broad interests beyond their celebrity. (The only other example of this kind of successful celebrity-first journalism comes by way of the Players’ Tribune, a site founded by Derek Jeter on which professional athletes publish confessional, sometimes illuminating essays about their lives and careers.)

“The Shop” is the first time you will hear James curse with abandon. It’s one of the few times you will hear James talk about the anxiety he has around the basketball careers of his children or Jon Stewart confessing to simply getting lazy in his career. It’s the only time that Drake has publicly discussed his infant son and the ensuing spat with the rapper Pusha T after Pusha revealed to the world on a diss track that Drake was “hiding a child.” Drake gives a juicy blow-by-blow of his tense dynamic with his closest peer and sometime mentor, Kanye West. Athletes present themselves as vulnerable neurotics instead of infallible Gods. You will hear Draymond Green, of the Golden State Warriors, argue fervently that athletes have no obligation to speak about politics and other social issues; you will hear compelling counter-arguments from the other guests in the room about why they do. You will hear the young comic Jerrod Carmichael offer a rare and searing takedown of a sacred cow, Lin-Manuel Miranda’s “Hamilton.” “Terrible,” he says. “It just sounded like when they sent people to rap multiplication to me when I was an inner-city youth, cause they’re like, that’s the way we’re going to get through to them.” In short, “The Shop” is a collection of soundbites that most entertainment journalists would kill to get page views from. It speaks to James’s overwhelming power in the culture at large—his guests must be candid, sharp, and nimble on the show if they want to impress a once-in-a-generation talent who’s bestowed them with the honor of an invitation.

If traditional media is the bugbear of professional athletes, social media is the domain of the N.B.A. The league’s prowess on Instagram and Twitter is part of the reason why the sport is culturally outpacing the N.F.L. and M.L.B. James himself has a knack for Instagram, posting awe-inspiring workout videos and rapping along to his music selections when new albums are released each week. In “The Shop,” James makes a winking reference to his longstanding détente with traditional media. He mentions that rather than a ghostwritten biography, he would like a rapper to put out an album about his life. “I’ll do it!” Drake volunteers. James jokes that writers will hate them. “The Shop” succeeds because it seems fuelled by a form of competitive athletic spirit—the desire to one-up a longtime foe. I do not operate under the delusion that this show is a purely unfiltered, candid, and unprecedentedly revealing look at the assembled stars. There are plenty of platitudes and generalities being proffered here. But it does exactly what the best celebrity profiles have always aspired to do: delight, surprise, inform. It’s entertainment at its finest, and a chance to see James beating the press at its own game.

‘Too many bluffers at this club’: Roy Keane says Man United...