Home Culture Lessons on the Royal We, from “Mary Queen of Scots” and “The... 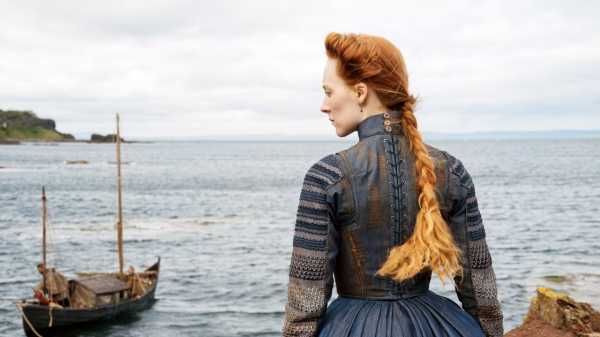 If I were Mary Queen of Scots (which I am not), I would be royally upset about not having got any Academy Award nominations except for hair. And it would be small consolation that my cousin Queen Elizabeth received BAFTA and SAG nominations in the category of supporting actress. Perhaps hardest to swallow, during awards season, would be witnessing how a historical drama about the rivalry between Elizabeth and me was trumped by a period comedy about Queen Anne and her frisky lady friends. True, “The Favourite” has kinkier sex scenes, but if there were a special award for use of the royal we, “Mary Queen of Scots” would triumph.

The English royal we, or pluralis majestatis, dates to the late twelfth century, around the time of Henry II and his successor Richard I, and meant “God and I,” invoking the divine right of kings. It has since come to be understood that a monarch using the royal we is speaking for the state. The famous utterance of Queen Victoria, “We are not amused,” turns out to be apocryphal. The story goes that a courtier told a ribald tale, perhaps at dinner, possibly at Windsor Castle, and in expressing her disapproval Victoria was speaking for all the ladies present. I only wish “we” had more details about the ribald story.

In “The Favourite,” the first use of the royal we is not by the Queen (who is “having an attack of gout”) but by her childhood friend and lover, Lady Sarah Churchill, the Duchess of Marlborough (“Mawlbra,” to my American ears), and it sounds like a power grab. At one point, Queen Anne tries to assert herself by saying, “It’s my state. I am the state.” But she can’t quite get it right. If only she had behaved more like Victoria instead of getting apoplectic when Mawlbra and her dance partner broke into that bizarre display of dirty dancing at the ball.

The two Queens in “Mary Queen of Scots,” however, both wield a downright imperious we. Mary, being the underdog, is the more insistent. Also, it’s her movie. Saoirse Ronan, as Mary, gets to be beautiful; Margot Robbie, as Elizabeth, gets the pox. Now might be the time to mention that my own title, Comma Queen, does not make me actual royalty. As a commoner, with an all-too-common urge to shovel popcorn down my throat at the movies, I kept searching Elizabeth’s face for the same Robbie who played Tonya Harding in last year’s “I, Tonya.” I didn’t find a trace. On the other hand, Bates, the valet from “Downton Abbey,” kept popping up in the royal retinue in Scotland; the actor who played him, Brendan Coyle, looked as shifty as ever in the role of the Earl of Lennox, Mary’s scheming father-in-law. So much for my credentials as a movie critic.

Back to grammar. Mary and Elizabeth never met in real life, and much of the dialogue in “Mary Queen of Scots” takes place in the form of letters, dictated or read in voice-over. (A meeting of the monarchs has historically been irresistible to playwrights and screenwriters; see Maxwell Anderson’s “Mary of Scotland,” and the 1971 film in which Mary was played by Vanessa Redgrave—theatre royalty, who, incidentally, was nominated for an Academy Award as best actress for the role.) Their use of “we” sometimes seems natural, meaning simply “you and I,” members of the same family. Other times it sounds ridiculous: “We would delight in holding our sister’s hand in ours,” Elizabeth writes. When Elizabeth sends a suitor to Scotland for her rival, Mary replies, archly, “We see why our cousin is so fond of the Earl.” But when it comes to her designs on the kingdom, Mary is icy: “We shall only do you the favour of betrothing your special friend once you name us heir.”

Both monarchs also employ a mean third-person: “You may tell Scotland that we wish to love the Stuarts as our kin, but they should love us in return,” Elizabeth instructs her courtiers to tell Mary, and the plural sounds vaguely insulting. “You dare to touch a sovereign without her permission?” Mary says to her husband-to-be. He catches on quick, and is soon heard saying, “This king will go where he pleases with his wife.”

Mary resorts to the first-person singular when she announces her pregnancy: “My husband and I bring another Stuart into the world.” Why would she not refer to herself and her husband as “we,” as in “We bring another Stuart into the world”? Because it would sound as if the Queen were capable of parthenogenesis (a property the Virgin Queen could have made good use of). Elizabeth II once corrected herself after using “we” in reference to herself and Prince Philip, clarifying, “by that I mean the both of us.”

While I am at it, I would like to point out that Mary Queen of Scots—both the regal title and the movie title—takes no comma. There is more than one Mary; the title is restrictive. She is Mary the Queen—you know, like Cedric the Entertainer or Chance the Rapper. Off with the comma!

US Dow Slips Over 900 Points as Massive Stock Sell-Off Ramps...