Home Culture Let’s Talk About the Clothes on “Succession” | 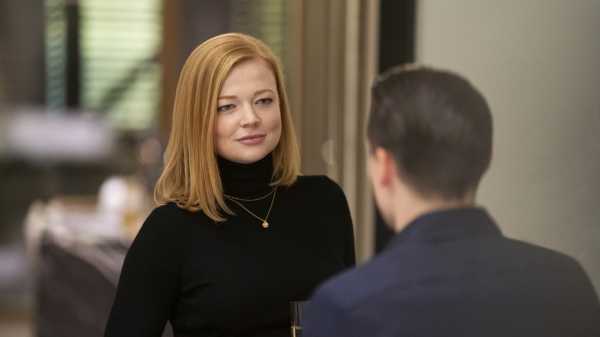 In a Season 1 episode of “Succession,” HBO’s hit tragicomedy about a billionaire media mogul’s cutthroat family empire, Kendall Roy (Jeremy Strong), the second-eldest son of the patriarch, sits in the back seat of a chauffeured car in Manhattan traffic. Kendall is on his way to meet with the founders of a buzzy startup that pairs struggling artists with high-end buyers, and for the occasion he’s bought a pair of calfskin Lanvin sneakers, the go-to fancy footwear of Silicon Valley tycoons. “Oh, fuck yeah,” he says, as he pulls them out of their powder-blue box and puts them on. But when he rolls into the meeting, dropping F-bombs and bombastic promises, Kendall quickly realizes that he has misread the room—the founders are idealists, unlikely to be impressed by corporate swagger or five-hundred-dollar sneakers. “I got these sneakers on the way down here because I thought . . . you’d all be dressed like fuckin’ Bjork, and I wanted to make an impression,” he says, in an attempt at coming clean. “So, I’m a jackass.” Despite this little performance, they pass on his investment. In business as well as in fashion, Kendall has overplayed his hand.

Kendall’s tactical shoe error might be the most overt fashion moment so far on “Succession.” The show, which is midway through its second season, does not, for the most part, call attention to matters of style. The Roys are businesspeople, creatures of boardrooms and drawing rooms, with limitless liquidity but not much in the way of taste. The spaces they inhabit tend to be grandly but blandly appointed, whether in the plush beige carpeting of Logan Roy’s opulent Fifth Avenue apartment or the clinical minimalism of Kendall’s downtown loft. Their clothing, similarly, is expensive but inconspicuous: logo-less wool baseball caps with perfectly curved bills, peacoats and Barbour jackets, cashmere sweaters, topsiders, well-tailored suits, and too many men’s neck scarves to count. But within the sea of neutral tones are subtle codes of class and power. The show’s costume designer is Michelle Matland, a New York-based industry veteran, who worked for the legendary costumer Ann Roth on projects like “Angels in America,” “Mildred Pierce,” and “The Talented Mr. Ripley” before going out on her own. Without being at all showy about it, Matland has made “Succession” the most fascinating fashion show currently on TV, one that is devastatingly accurate about the intersection of extreme wealth, vanilla taste, and the strictures that come with living in a world where one misplaced move can out you as an interloper or a fraud. 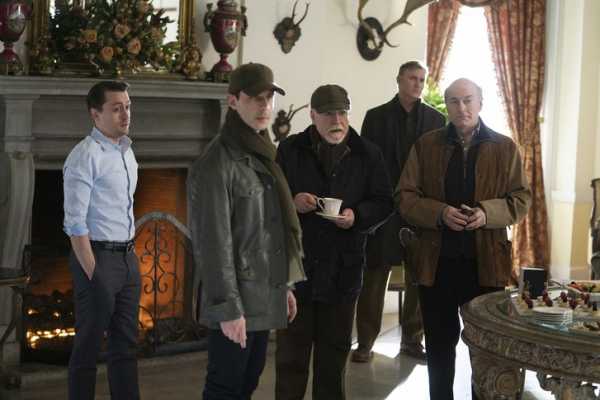 In their leisure time, the men of the Roy family prefer logoless baseball caps with perfectly curved bills.

Consider, for instance, the hierarchical nuances of “Succession” ’s many dark business suits. Logan Roy (Brian Cox), the patriarch, wears custom pieces by Leonard Logsdail, a bespoke British tailor in Manhattan who makes suits—often lined with Hermès scarves—for Martin Scorsese and Steven Spielberg, and who created the costumes for “The Wolf of Wall Street” and the latest remake of “The Great Gatsby.” His are the threads of a man at the zenith of his power. By contrast there is Tom (Matthew Macfadyen), the industrious Midwestern husband of Shiv, Roy’s only daughter, who has clawed his way into the top spot at the family’s news network through a combination of brown-nosing and burying unsavory company secrets. Matland told me recently, by phone, that Tom’s wardrobe—flashy Italian suits by Zegna and Loro Piana (which can range from two thousand dollars to upward of fifteen thousand)—is meant to signal his status as an arriviste. “He wears his desire on his sleeve,” she said, which in the Roy world makes him vulnerable: a rare moment of sibling amity comes early in Season 2, when Shiv and Roman (Kieran Culkin), the youngest and most obnoxious Roy child, take turns ridiculing Tom’s taste in suits at the dinner table.

Even less naturally at home within the clan is Cousin Greg (Nicholas Braun), Logan’s gangly great-nephew, who plays the fool as he stumbles up the company ladder and into Machiavellian schemes. Before Greg got entangled with the Roy family, “the highest-end store he’d ever seen was a Macy’s,” Matland said; his wardrobe tended toward dumpy khakis and oversized dress shirts from the Gap. Now, ensconced at the company, he’s got the wardrobe of a corporate up-and-comer—Rag and Bone, Acne, Theory, and Ralph Lauren (a brand that Matland said he would have learned about from Tom, his de facto guide through the trappings of wealth). “But it’s almost like a veneer,” Matland said. Greg is a tourist in the Roys’ world; he will learn their customs and don their camouflage, but none of it comes easily. Unlike Roman, who slicks his hair back but often refuses to wear a tie, Greg can’t pull off snotty dishevelment. He lopes through the company’s hallways rumpled and nervous, with a patina of sweat glossing his upper lip.

The most notable fashion evolution on “Succession,” by far, is that of Shiv, who is played with steely cunning by the Australian actress Sarah Snook. In Season 1, she was the rebel, the only sibling working outside the family business. To highlight her distance from the world of the company, Matland told me, she gave Shiv a soft, feminine look, with delicate ensembles in jewel tones and pastels and long, wavy Botticelli hair. In Season 2, Shiv has decided to step into the family fold, and she has the sharp new look to prove it. Gone are the daddy’s-little-girl shift dresses that had earned her comparisons to Ivanka Trump, replaced by what Matland calls Shiv’s “new armor”: structured, tailored pieces from the Row, Stella McCartney, Armani, and Max Mara, which match the angular slash of her new blown-out bob. (Ivanka, meanwhile, was photographed this week with a short new Shiv-like do.) 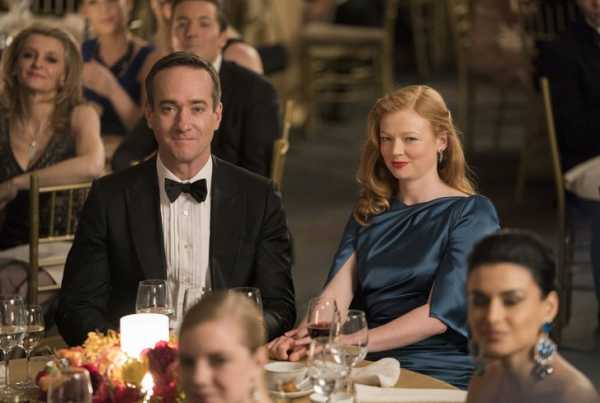 In Season 1, Shiv’s distance from the family company was suggested by her soft, feminine look.

Shiv’s makeover has generated a lot of Internet commentary in the “step on my face” vein, and I can see why: turtleneck sweaters and high-waisted slacks have rarely looked so ruthless. And yet there are signs, sartorial and otherwise, that Shiv may not be as bulletproof as she thinks. In last week’s episode, she shadowed her father at the office for the first time, wearing a gray pants suit, the traditional garment of power bitches everywhere. But the ensemble felt somehow off: the fit a bit too snug, the gray too light to work with her scarlet hair. She looked more like a recent law-school graduate in a midsize firm than a big shot prepared to take over an empire.

In the episode that airs this coming Sunday night, the Roys travel to a New England estate to meet another billionaire family, the Pierces, who own a left-leaning media juggernaut that Logan intends to buy. Compared to the Roy family homes, the Pierces’s Tern Haven is shabby chic: chintz, worn Chesterfield sofas, paisley bedspreads. The family matriarch, played by Cherry Jones, wears plain, almost Quaker-like clothes—a crisp white shirt, a single string of pearls—that telegraph generations of inherited wealth. “The Pierces are not ostentatious,” Matland told me. “I could see one of the sons wearing the sweater his grandfather wore twenty years ago. They have absolutely nothing to prove.” In some ways, though, the sensibilities of the Pierces and the Roys are not that far apart. During a cocktail gathering at which each Roy sibling is assigned to talk up a member of the Pierce family, the camera pans out, revealing nothing but dull tones of camel, dusty rose, navy blue, brown, and off-white. The décor is as bloodless as the small talk. 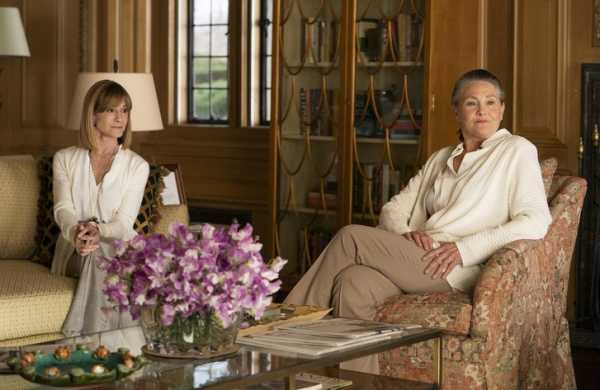 In this week’s episode, the Roys rendezvous with the Pierces, whose old-money style is embodied by the family matriarch (played by Cherry Jones, at right).

If you watch only the first few episodes of “Succession,” you might think that it is a show about how fabulous it is to be rich—the private jets, the black credit cards, the freedom to hurl devastating insults across dining tables littered with crystal glasses. (“It’s like being a superhero, only better,” Tom tells Greg in Season 1. “You get to wear a costume, only it’s designed by Armani and doesn’t make you look like a prick!”) But, as “Succession” has proceeded, that sense of elated entitlement has curdled. The Roys are a royal family of little pleasure or sparkle. Even their recreational activities have the feeling of a forced march. In the second episode of this season, on a mirthless corporate boar-hunting expedition in Hungary, Kendall sports gold aviator sunglasses with a Russian ushanka fur hat and a primly tied scarf—a combo so incongruous that it almost seems like an eccentric fashion statement. But on Kendall it just looks confining, and a bit sad. The Roys dress the same way that they live: to protect what they have, not to revel in it.

Targeted Sanctions Inevitable if Russia Does Not Explain What Happened to...