Home Culture Let’s Talk About the Yacht Clothes on “Succession” | 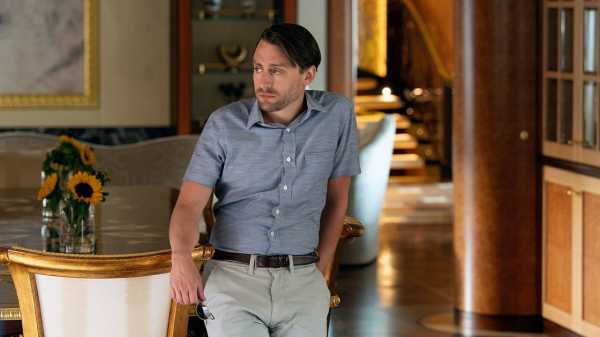 In January, 1973, a reporter for the Los Angeles Times flew to Nice, France, to interview the director Herbert Ross about “The Last of Sheila,” a mystery picture that he was shooting on the Côte d’Azur, much of which took place on a luxurious, hundred-and-sixty-five-foot yacht called H.M.S. Malahne. The gilded ship, which was built in England in 1937 and once helped evacuate soldiers from Dunkirk, became something of a Hollywood fixture in the nineteen-sixties and seventies: it served as the floating production office for “Lawrence of Arabia” in Jordan, was a regular Mediterranean clubhouse for Elizabeth Taylor and Frank Sinatra, and popped up in “The Last of Sheila,” as the floating summer home of a sinister film producer played by James Coburn. (There was a kernel of truth buried in this fiction: at the time of filming, H.M.S. Malahne was the property of a womanizing film producer named Sam Spiegel, who was allegedly so handsy with actresses that Billy Wilder once said that he had “velvet octopus arms.”) Dark things can happen out at sea, when people feel unmoored from both the shoreline and a landlocked sense of morality. “The Last of Sheila,” written by Anthony Perkins and Stephen Sondheim—who used to host infamous mystery parties together in New York—pushes this idea to murderous excess. A group of glamorous strangers (including Raquel Welch, Ian McShane, and Dyan Cannon) set sail, people start dying, and it’s up to the viewer to discover whodunnit. In his Los Angeles Times interview, Ross acknowledged the inherent creepiness of floating stories: “If you have a group of people on a ship,” he said, “the ship becomes a metaphor for existence, you can’t help it. . . . it’s about civilization and barbarism.”

I could not stop thinking about “The Last of Sheila” while watching the Season 2 finale of “Succession,” which traps the Roy family and their closest remora on a superyacht in the Adriatic. Like H.M.S. Malahne, which would look like a dinghy beside the Roys’ “boat” (rich people never say “yacht”), their sea vessel is also the setting for a kind of murder mystery. After a series of scandals involving Waystar Royco’s cruise division (dark things happen at sea!), the company’s board demands a “blood sacrifice,” a scapegoat that they can tie up in litigation while the empire sails on, more or less unscathed. Each person who boards the ship knows that they could end up as the one overboard. 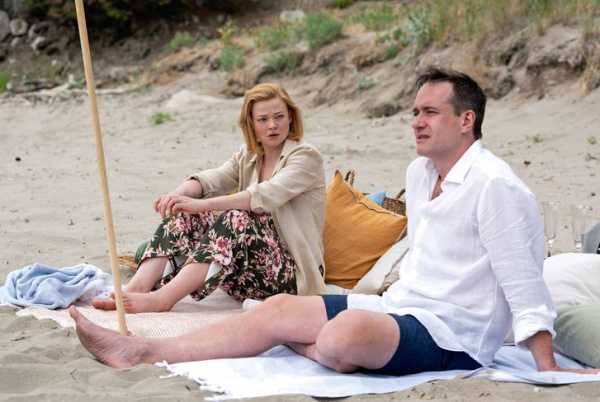 And yet they look fabulous. Relaxed. Expensive. Carefree. Cool in Top-Siders and floral maxidresses and gossamer pareos. Like Cannon in “Sheila,” who wore oversized tinted glasses and a circus of colorful caftans and straw hats, even as she was fearing for her life, the Roys, in resort wear, are engaging in high-stakes high fashion, on the high seas.

When I wrote about the fashion on “Succession” earlier this fall, I argued that the Roys are a family of “little pleasure or sparkle,” that, in spite of their money, they are tasteful to a fault, dressing protectively in uniforms of beige cashmere rather than in eccentric couture. I spoke to the show’s costume designer, Michelle Matland, who told me that this was accurate—but that she could not wait for me to see the finale, where we would get to see a different side of the Roy dress code. “I shouldn’t even be telling you this,” she said, at the time. “But they go on a yacht. We get to see them at play.”

Even with this tip-off, the Roys’ maritime peacocking came as a thrilling visual surprise. At last, here was the family in private, dressing only for each other. “Sails out, nails out, bro,” as Kendall instructed Cousin Greg. And while their fashion choices are more adventurous at sea—Tom’s pink linen Ralph Lauren jacket, Shiv’s flowy white Hobbs jumpsuit with an oversized waist sash, Willa’s floral Equipment dress, which she likely bought after seeing it on Kate Middleton—there is still a sense of gloom that seeps through the pastels. I spoke to J. Smith-Cameron, who plays Gerri, Waystar Royco’s general counsel, who did her best Sue Mengers impression in a series of Cynthia Rowley caftans. Smith-Cameron told me that she wanted to look like she was seasick with stress, even in spangles. “We see these people on this plush boat on the Adriatic with delicious food, and there’s a pool and a slide and Jet Skis,” she said. “But everyone is filled with dread. So it was actually meant to be jarring: beautiful surroundings with long faces and furtive glances, not people enjoying themselves. So all of our resort wear is meant to look nice but at the same time be amusingly counter.”

Matland echoed this sentiment. Tom, for example, is coming off his disastrous performance at the congressional hearings on Waystar Royco’s crimes and is “highly agitated,” she said. “His clothing, which was a lot of Ralph Lauren linen suits, is there to belie the fact that he is on the edge of a breakdown. He is constantly trying to look as if he is comfortable—pink linens say honeymoon, vacation, enjoyment—but it is there to cover for the fact that he is unhinged.”

Matland’s goal with the episode was to telegraph the shared anxiety that each character feels while laundering this panic through the resort-wear section of Bergdorf Goodman. Kendall (Jeremy Strong), who quietly slumps around, wears a tiny Paul Stuart trilby hat (Strong’s idea), which Matland says serves as both a security blanket and as a sign that he is feeling deeply insecure. “The hat was crumpled, if you’ll notice,” she said. “It was purposefully imperfect.”

In the final twist, when Kendall turns saboteur, he is back in his city armor: a sharp, fitted Tom Ford suit that almost shines like sharkshin. He sheds the earth tones that he has been wearing all season and dons the color black—a mournful color, but also one that marks him as an assassin, capable of patricide. He’s lost his blingy Oliver Peoples sunglasses, the typical eyewear of rich scions who have a trust fund and personal shoppers who run errands to SoHo; he is at last seeing clearly.

Sunglasses were crucial to this episode, Matland told me, when it came to winking at subtle differences between characters. Shiv, for example, wears traditional Ray-Bans, a sign that she wants to traffic in old-money rituals rather than in flashy ostentation. (“It was significant that she did not wear Gucci or Prada,” Matland said.) Tom’s sunglasses in his much memed chicken-stealing moment, right after he breaks down about his unhappy marriage, are Persol, an old-world Italian brand favored by worldly celebrities, most notably by Anthony Bourdain, who wore his pair all over the globe. His shades are as close to representing rebelliousness as one can get in the Roys’ world. Tom is past his breaking point; he’s having his Brando moment. 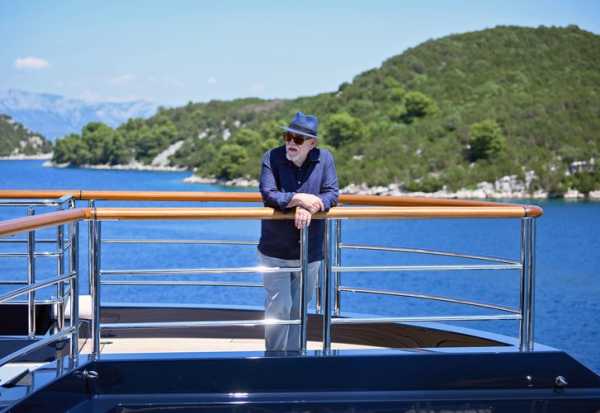 Logan Roy (Brian Cox) on the top deck of the yacht.

Logan never lets his guard down, even in the sun—his sun hat is wool, from Walker Slater, a tweedy, posh haberdasher from Scotland. Nor does Roman, who, despite being the most feckless character, may also be the most authentic, in that he almost never changes his costume. “He has a uniform he’s super-comfortable in,” Matland said. “Blue oxford button-ups. Always.”

As for Shiv, most of her boat wear, including her cream pinstripe suits, is Ralph Lauren Purple Label, a sign that she arrived on the ship most prepared for professional ruthlessness. She wants the top job, she’s dressed for it, and she’s willing to throw her husband under the bus for it, save for a rare moment of weakness in front of her father. Her one whimsical touch is an oversized straw hat with a black ribbon, from the Brooklyn brand Lola, which makes her look pampered and pastoral, like an extra from “Anne of Green Gables.” Even with her sharp, new-ish bob and architectural wardrobe, Shiv is still a spoiled, priggish little girl who throws tantrums if she can’t get her way, and her accessories betray her true nature. (As a side note, Smith-Cameron told me that was so taken with Shiv’s hat that she went out and bought one for herself after the episode wrapped.)

On and Off the Avenue 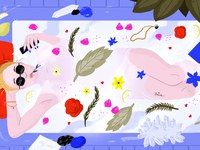 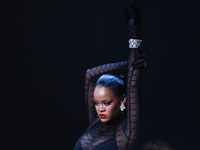 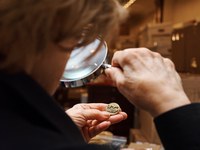 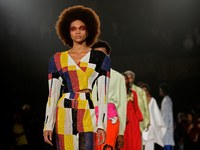 A Message of Useful Beauty from New York Fashion Week 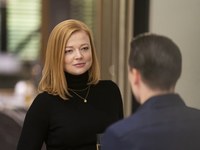 Let’s Talk About the Clothes on “Succession” 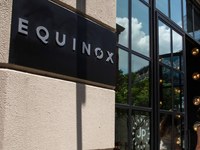 Equinox Members Take a Stand Against Trump (Sort of)

In “Succession,” no detail is out of place. Like a classic whodunnit, it is the kind of show that begs rewatching, studying, squinting at with a gimlet eye. If you run the finale back, you might wonder when exactly Cousin Greg decided to betray Logan and give Kendall the incriminating documents that he stole. Was it while shirtless and in baggy swim trunks, drinking a mediocre rosé, or was it while he was wearing a navy Lacoste polo on the Roys’ private jet? When Greg first boards the yacht, in a striped French blue sweater and tailored khaki shorts, he looks suspiciously like Tom Ripley, a sleek interloper in the world of luxury who is willing to kill to survive. Perhaps even then Greg was eager to turn traitorous. Matland, who worked on the film “The Talented Mr. Ripley,” understands more than most how to make summer attire appear instantly malevolent. She creates a world of sunny poplins and ivory linens and breathable cottons, but, in the end, we are the ones left holding our breath.