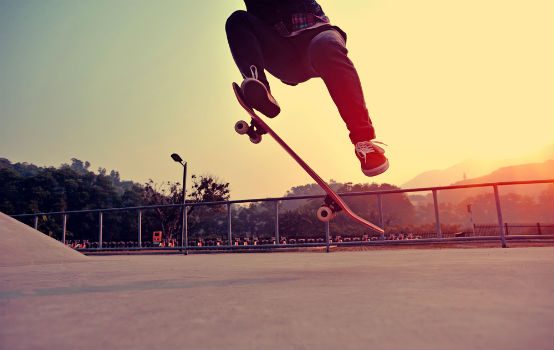 A Saturday in the suburbs is more of a challenge than an opportunity. It hangs off the end of a week like an ellipsis, or a blinking cursor; an empty space that has to be filled with…something. In figuring out what to fill it with, though, ideas cannot be so easily partitioned into humdrum notions of good and bad. Every idea for the suburban young is a good idea at conception, and can sometimes remain so during and after execution. Watching horror films, poring over CD jewel case inserts, and occasionally writing have, by and large, not failed me. But of course, some people are more adventurous.

For my younger brother Greg, Saturday night meant going to the Hilton Short Hills, the four-star hotel located across from that renowned luxury corpuscle, The Mall at Short Hills. He and his friends would weave through the complex to the parking garage in back, where they would skateboard. Since my brother’s friends were also mine, I would occasionally tag along, though I did not skate, preferring to linger absentmindedly, listening to music.

It always baffled me why that spot was ever favored. Yes, it was secluded and spacious, though I don’t recall there being much that offered more than low-reward tricks. More than that, it was a luxury hotel that surely had some kind of CCTV, and I don’t remember being there for longer than an hour before a security guard politely shooed us off, leaving us with few alternatives beyond bowling and McDonald’s. Perhaps I was too logical to be a skater.

Jordan Peterson’s 11th rule, of his now-legendary 12, states that we should not “bother children while they are skateboarding.” The chapter describes Peterson marveling at the sight of skaters attempting tricks on the University of Toronto campus. “The crazy kids…would pull back about fifteen yards from the top of the steps. Then they would place a foot on their boards, and skate like mad to get up some speed” so as to nail a handrail slide, which they’d land “sometimes gracefully still atop their boards, sometimes, painfully, off them.”

“Some might call it stupid,” Peterson writes. “Maybe it was. But it was brave, too.” Never in my life did I ever think a bestselling book of any kind would side with skaters against security guards. But there you have it. “Beneath the production of rules stopping the skateboarders from doing highly skilled, courageous and dangerous things I see operation of an insidious and profoundly anti-human spirit.” Peterson, contra almost everyone, sees thrashing, shredding, and the like not as public nuisances, but as necessary pathways for headstrong boys to become reliable men.

Peterson’s fixation is understandable. Pain and risk must in some way be integral to “extreme” sports; otherwise, what’s the point? As I understood it, it was cool to prefer street skater Rodney Mullen to vertical skater Tony Hawk. This was in part because anyone could do the tricks Mullen invented, but also, I suspect, because street was more authentic and paid less mind to the bleeding-heart niceties of pads and helmets. My brother Timothy badly scraped his face and got a concussion after he fell face-first skating down a hill. Another friend broke a collarbone doing the same on a completely different hill. The classic music video for noise rock band Unsane’s song “Scrape” features blooper reels from skate videos instilling similar evidence of gravity’s dominance. One of the most popular videos of the late 90s were from CKY (Camp Kill Yourself), which, with skateboarding magazine Big Brother, created MTV’s Jackass, a show whose stunts ran the gamut from juvenile to actually quite funny, but always pushed the human body up to, and sometimes beyond, its physical and psychological limitations.

But the illogic of skateboarding doesn’t get very far without its logistics. Skating, like much of teen life, is a matter of finding convoluted routes to simple pleasures. If there is no nearby skate park, or the nearby skate park sucks, the skater must evaluate the alternatives. And of those alternatives, which is the most lightly policed? Will a decent cop or a not-so-decent cop be on patrol? What injuries can be mended in the kitchen with First Aid and ice as opposed to stitches? Want to practice tricks? Find some plywood and build a ramp. Want to connect with other skaters? Start a zine (or some post-print equivalent network). Want to showcase local talent? Film it.

On one outing at an office complex not far from our house, Greg was attempting to do a jump off of a short set of stairs. He did not land it. Instead he lost his balance and fell on his side, making a hard thud on the stone and emitting a pained grunt at the same time. Timothy had filmed the attempt, and when he set the wipeout to a loop it was instant family comedy gold. Timothy and his twin, Michael, would pivot to BMX, but Timothy took his camera with him, making several videos, and effectively teaching himself how to film and edit. He has since gone on to become a professional videographer.

Skateboarding, in this light, is less of a rite of passage from one stage of growth to the next than it is a thing to do in the meantime. If that is a less operatic view it is also a less narrow one. After all, skateboarding took hold in large part because surfers needed something to do off-season. Out of it, a culture grew, with its own modes of expression and standards of excellence that go far beyond mere one-upmanship. Like its punk codependent, skateboarding harnesses adolescent (and not exclusively male) energy that is otherwise neglected or misused in more conventional settings. “I’ve developed a theory,” muses a writer in the zine Skatedork, “through all of my days of skateboarding that boils down to what I need from this art form. There is some piece of life we all need to participate in to make ourselves complete…. If that piece is skateboarding, making music, or writing essays and articles then I say you should do it, just to prove to yourself that you can.”

I don’t think any of this outright offends Peterson’s views. What bearing they have on skaters is another matter. Their appropriation by cultural criticism is about as useful to them as their appropriation by media and advertising 20 years before—less useful actually. By the time Peterson or anyone else have come to thinking that they understand them, the skaters will by then have moved on to another rail, or possibly something more ambitious.

Chris R. Morgan writes from New Jersey; he has been published in The Los Angeles Review of Books, Lapham’s Quarterly, and The Week. Follow him at his blog and on Twitter @CR_Morgan.