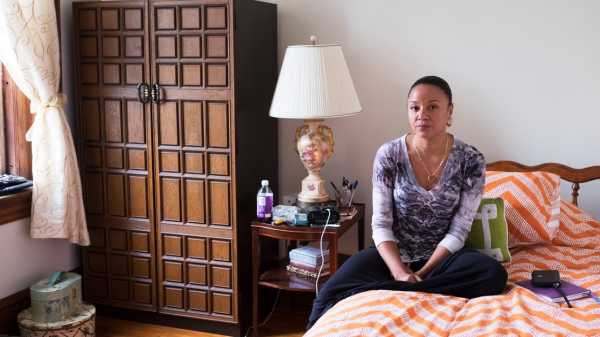 Sara Bennett’s first book of photography, “Spirit on the Inside,” doubles as a collection of character evidence. Published in 2013, it portrays women who, years after being released from the Bedford Hills Correctional Facility, in New York, still treasure memories of their fellow-inmate Judith Clark, a getaway driver in the Brink’s robbery, in 1981, in Rockland County, which left two police officers and one security guard dead. At the time of the book’s publication, Clark, a former member of the Weather Underground, was serving seventy-five years to life. She was, at once, Bennett’s original muse and her highest-profile client. During the photographer’s first career, as a public defender, she often represented women condemned to decades-long sentences; in her work as an artist, she has made a point of portraying these women, in order to protest the notion that only “nonviolent felons” and “low-level drug offenders,” as she told me recently, deserve the public’s mercy. “I wanted to say, ‘Wait a minute,’ ” Bennett said of her subjects. “ ‘They deserve a second chance as well.’ ”

Clark’s release, last May, after nearly four decades spent at Bedford Hills, was in part the product of sustained lobbying by activists who contend that the correctional system should prioritize redemption over retribution. Bennett, who is now a full-time photographer, has continued to direct her art toward this advocacy, under the assumption that “if judges, prosecutors, and legislators could see people who have been convicted of serious crimes as real, individual human beings, they would rethink the policies that lock them away forever.” In “The Bedroom Project,” one of her latest series, Bennett trains her lens on the aftermath of incarceration, visiting former inmates—all of whom are women, most of whom have finished sentences for homicide convictions—and photographing them in their new residences. She pairs the images with handwritten reflections by her subjects, which recast the shots as postcards from a psychic state somewhere between unease and relief. A few of the women have spent years out of prison; others reel from more recent releases. Although the subjects range in age, race, and affect, their expressions convey a shared sense of peace beset by disbelief; several women eye the lens with a grim suspicion more common to mug shots. “I lived at home with my mom until I was arrested,” a forty-five-year-old named Aisha writes, in careful cursive, adding that after her release she feels like “a Kindergartner in college.” 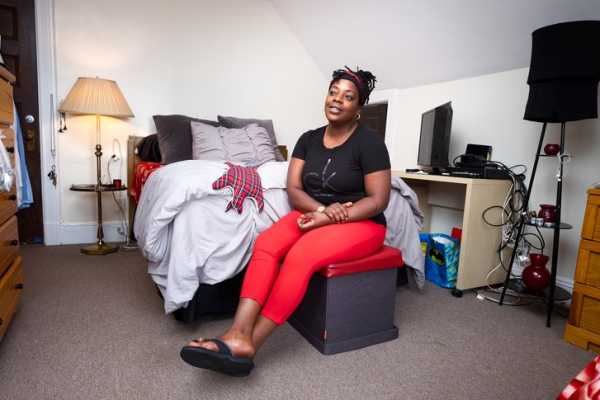 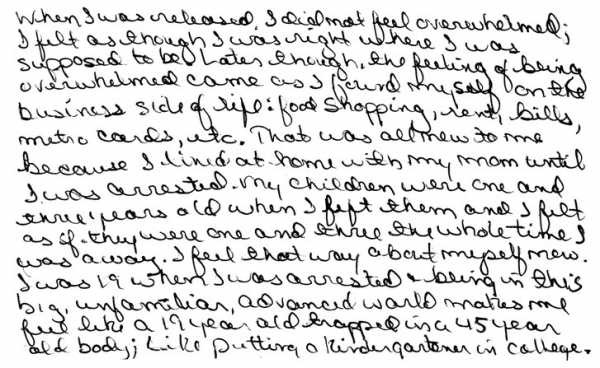 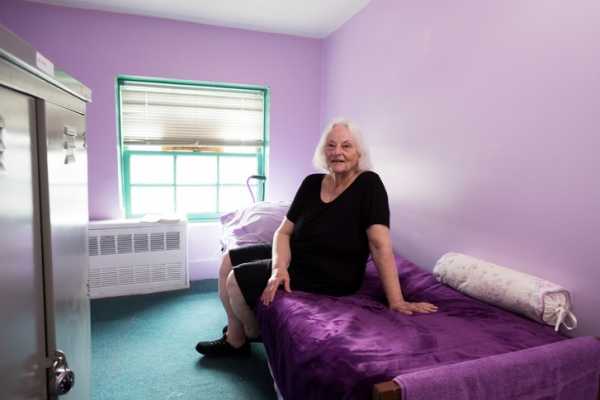 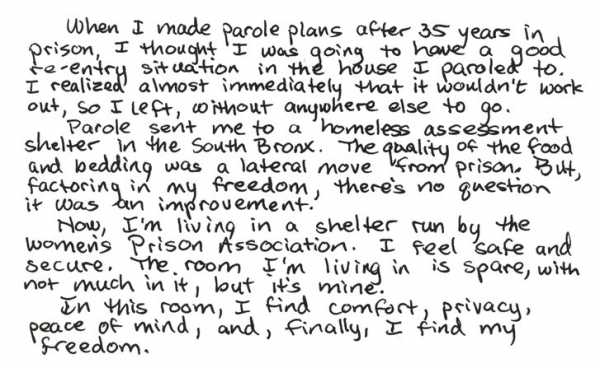 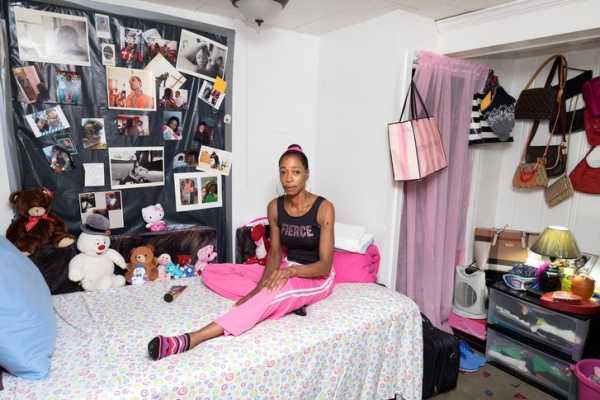 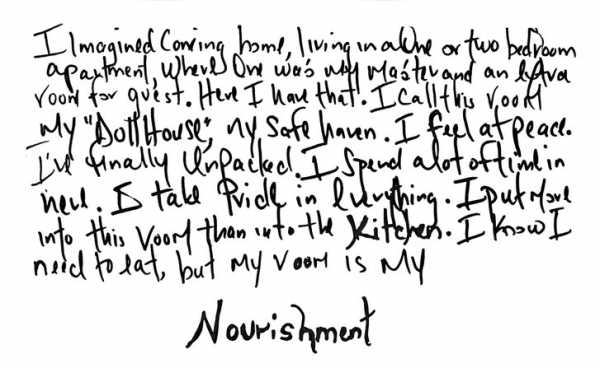 The rooms in Bennett’s series conjure, by turns, the boxy confines of cells and the comforting clutter of family homes. Some belong to apartments and brownstones; others to homeless shelters, transitional houses, or group lodgings. In one shot, metal cots and exposed piping appear behind Annette, fifty-nine, who calls her independence “breath-taking,” although she shares a room with four other women. Beside blank walls, slim windows, and aging radiators, commonplace objects assume surprising poignance. Bennett photographs wigs and slippers, mugs and plush monkeys, Goya beans and tins of Nesquik. Each item signifies an indulgence of freedom, a novel assertion of ownership. We learn from Niki, who is fifty-five, that she completed two associate’s degrees in prison but still pines for her bachelor’s. (She has since received the degree.) Claude, forty-five, with a tattoo peeking from her cleavage, keeps her mother’s ashes beside glass vials of beauty supplies on her dresser. “Everything in this room belongs to me, so I have a claim,” she writes. “The Bedroom Project” presents each woman’s prison sentence as the prelude to a new life rather than the end of an old one, but a vision of lost adolescence emerges from the Victoria’s Secret shopping bags and floral bedspreads, the simple but intimate accoutrements that bring to mind a teen-ager’s room. One subject, Tracy, who is fifty-one, calls her apartment her “doll house.” “I spend a lot of time in here,” she writes. “I take pride in everything.” 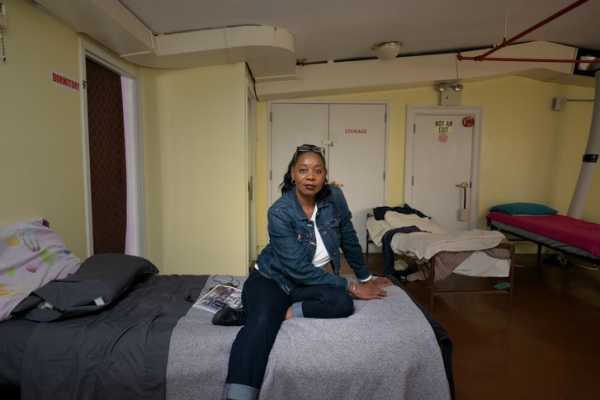 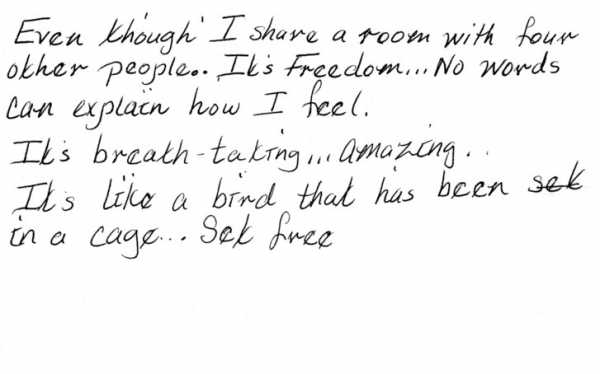 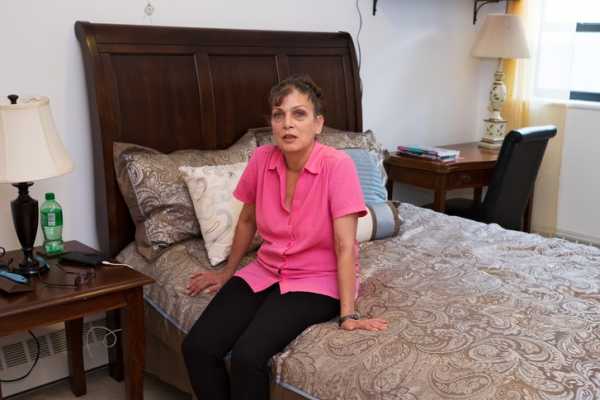 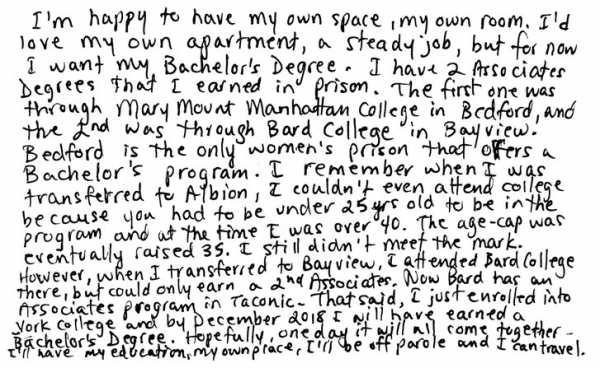 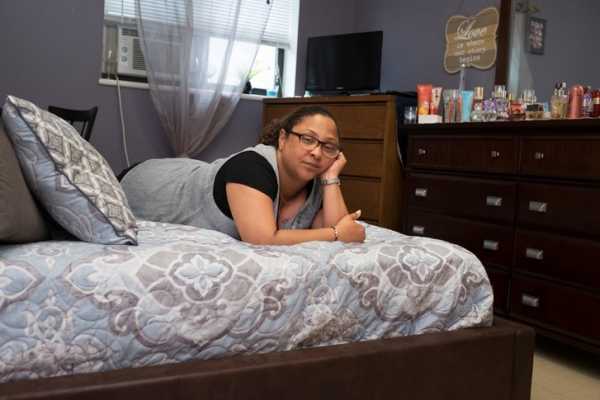 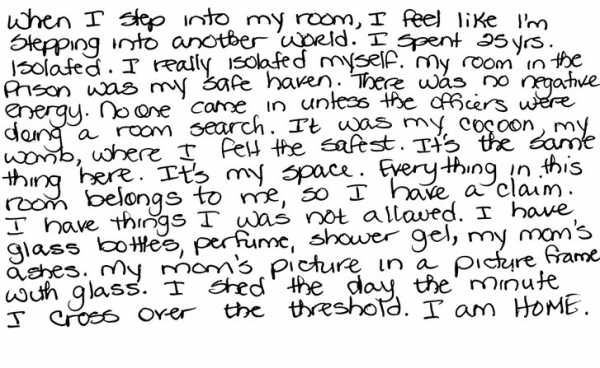 Because Bennett’s aim is to reconcile each perpetrator’s guilt with her right to restitution, she avoids disclosing the details of her subject’s crimes; in most cases, she told me, she doesn’t even know them. The intent of the series is to depict with humanity a group of people who have enacted great inhumanity—in some cases, as Bennett suggested, because they first endured it themselves. (One cruel irony of mass incarceration is that prison provides a safe place to sleep for those female inmates who have suffered homelessness and domestic violence.) Bennett’s project attempts, in part, to collapse the images of criminal and victim, dulling the sense of otherness that we might associate with perpetrators of serious crimes. The risk, of course, is that her vision might also efface the crimes for which the women served time and, in turn, the unseen victim or victims who correspond to each image.

When I pressed Bennett to imagine how relatives of those who were killed might react to her project, she conceded that the photographs might prompt a response different from hers. As a public defender, she sometimes encountered the kin of victims in court. One of her most painful memories involves the wailing mother of a young man who was slain by his girlfriend. “You’re lying,” the mother screamed at Bennett’s defendant, who said that the victim had beaten her. Bennett has received criticism from viewers who argue that, by stripping her photography of context, she ends up abrading its authenticity. “I have to remind myself that it doesn’t matter,” Bennett said of the women’s crimes, “because that was twenty-five years ago. This is the person in front of me today.”

For many of these women, though, the past retains a lasting clamp on the present. Valerie, who is sixty-two, still needs her parole officer’s permission to visit the beach, the casino, or the boardwalk at Atlantic City. She points out, beneath her unsmiling portrait, that freedom from prison doesn’t amount to “being free.” “Until I get off parole, my life is messed up,” she writes, likening her spare bedroom in a shared apartment to a second cell. Only a few years have elapsed since her release. Of all Bennett’s subjects, just a handful, including Mary, who is fifty-one, have spent more than a decade out of prison. Nineteen years after a sentence that lasted nearly that long, she reclines on a smooth duvet in her Brooklyn home, wearing a flannel and ripped jeans, beside her niece and a preening dog. “For years everything I did, everything I thought about, reflected back to prison,” she writes. “Maybe you have to do the same amount of time outside, as you did inside, before you feel free from it.” 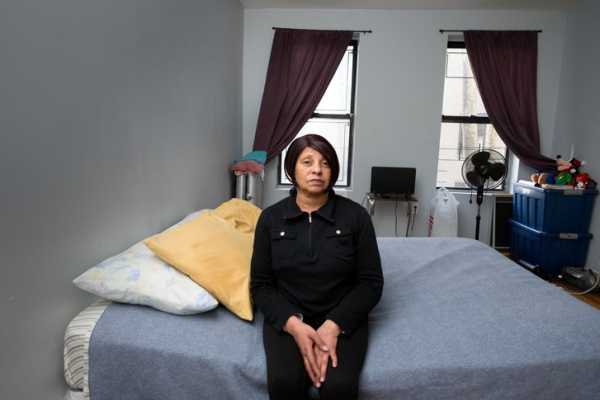 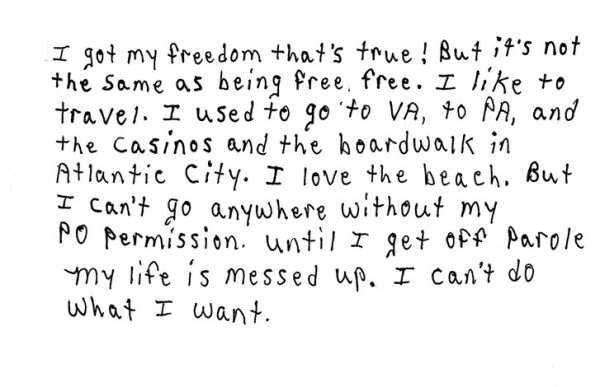 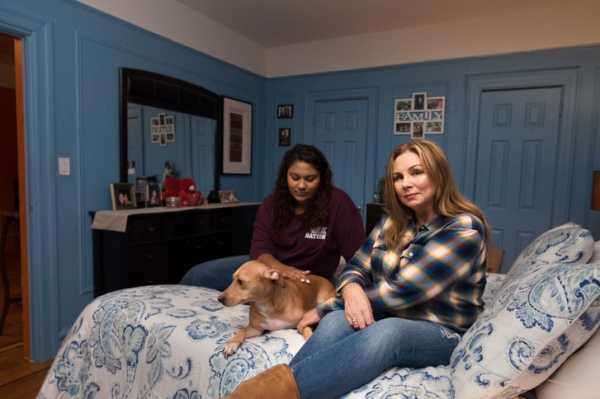 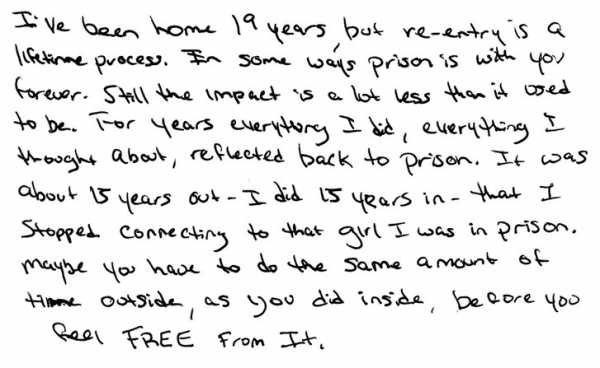 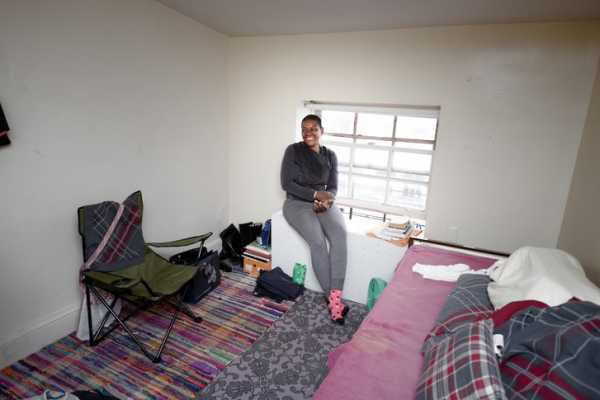 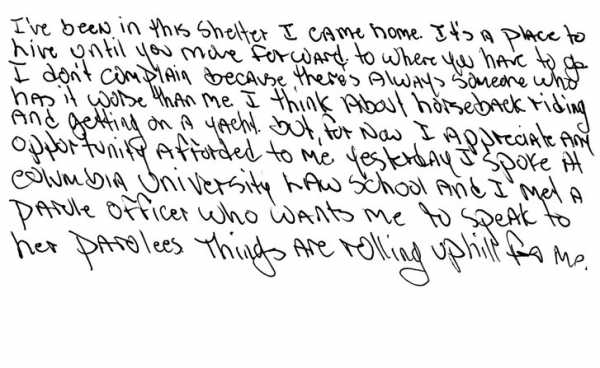 Russia Will Cut Space Launch Prices by 30% in Response to...

Debunking What the Health, the buzzy new documentary that wants you...

The Cambridge Analytica whistleblower on how American voters are “primed to...