Home Culture Lil Peep and the Dilemma of the Posthumous Album | 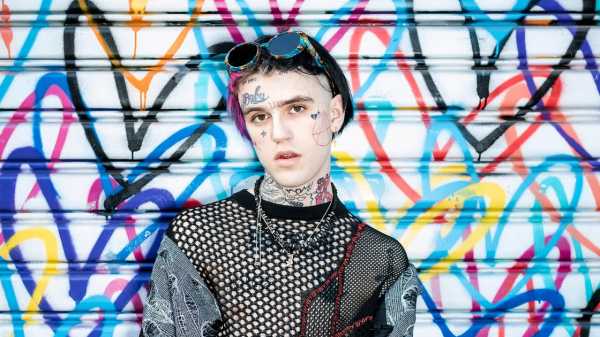 Last month, Columbia Records hosted a listening session for “Come Over When You’re Sober, Part 2,” the posthumous album from Lil Peep, the rapper and singer who died tragically, last year, of a drug overdose at age twenty-one. On the surface, it was a typical major-label event: hosted in an intimate, dimly lit downtown space, there was free wine and beer for the journalists who attended, along with swag bags and snacks, Peep marshmallow candies among them. Speeches were made by a label representative and Lil Peep’s management, and images of Peep—with his copious hand and face tattoos, his drowsy demeanor—were projected around the room, as guests mingled and listened to the album. It was part ceremony, part homage, part corporate schmoozefest.

But the event was also framed as a teachable moment about the concept of the posthumous album. Before his death, Lil Peep had taken an independent route to stardom, releasing his music with little help from the massive industry infrastructure that tried to court his business. Collaboration with major artists—especially in the form of guest features—is, today, the fast track to success, but Peep was notably fastidious about whom he chose to work with and how he released his music. For many, Columbia’s release of the new record was, even more than an act of generosity, a business proposition, one that suggested the exploitation of a young, promising artist’s legacy.

At the party, Columbia, along with Peep’s friends and family, took great care to work against those assumptions. In one of her few public statements about Peep’s music, Peep’s mother, an elementary-school teacher named Liza Womack, took the microphone before the album was played. Addressing the crowd, Womack, who is petite, bookish, and wry, read from a set of printed pages in her hand. “What do you do when a young artist dies long before his time, leaving behind a legacy of finished and unfinished work, and a legion of heartbroken fans?” she asked. “Well, I feel very proud of what Columbia Records has done,” she said. “This is the album Gus would have wanted.” The version of “Come Over When You’re Sober, Part 2” played during the event, in keeping with Peep’s aversion to unnatural collaboration, had no features across its eleven tracks—a significant gesture, given how many major artists have expressed adoration of his work.

If Peep’s music was defined by its nihilism and morbidity, the new album makes no attempt to break from that: nearly every song is an eerie harbinger of what came to pass. “I wonder who you’ll fuck when I die,” Peep sings on “16 Lines,” an exaggeratedly languid song that sees the artist in a drug haze, speaking about death as an imminent inevitability. Part of what made Peep’s work so tantalizing, and also so difficult to wrestle with, was how placid he could be when facing the concept of death. Death was not a fascination or a stylistic conceit but an all-encompassing, almost soothing aspect of his music. Those handling his work have chosen to honor that quality, without gussying it up to make him a cartoon.

Peep’s music is difficult to characterize, because he seemed not to have an understanding of genre boundaries. A Gen Z savant, his sensibility was inherent, organic, never calculated. At the listening session, Womack described this well: “In a way, his emo-rap, or emo-trap, or alternative-rock music style represents this strange transformation—a kind of mutation of music genres. Gus’s style was unique. Gus’s style was honest. He was an honest person.” “Come Over When You’re Sober, Part 2,” like Peep’s previous releases, is uncanny in how it melds the deeply familiar and the strangely futuristic. And, although his music grapples with difficult subjects—death, isolation, hopelessness, drug abuse, romantic torment—his songwriting instincts were decidedly pop. Each track on the new album has a melodic accessibility and offers a sludgy, slurred rendition of something you might hear on the radio. “His songs are almost dreamlike at times,” Womack said. “They evoke events, conversations, and feelings in a wide range of ways.”

Womack spoke didactically, because the question of legacy has become unusually urgent in pop music, and particularly in hip-hop. The last year has seen the premature deaths of some of the youngest and fastest-rising stars of their generation. In June, the troubled Florida rapper and singer XXXTentacion—who’d been charged with assaulting his pregnant girlfriend, among other gruesome crimes—was shot dead in his car at age twenty. And, in September, the twenty-six-year-old Pittsburgh rapper Mac Miller died of a reported accidental drug overdose, just weeks after releasing his new album, “Swimming.” Artists have died in their prime before, of course. But, because this generation had access to technology and distribution platforms that encouraged them to be hugely prolific, there exists a mountain of unreleased music by deceased young stars to be sifted and pumped out into the world. It’s a minefield of commercial potential.

Despite the care taken to honor Lil Peep’s legacy, the creation of “Come Over When You’re Sober, Part 2” was not without controversy or compromise. In September, Columbia released a song called “Falling Down,” a posthumous collaboration between Peep and the late XXXTentacion. The two shared artistic DNA—they were both tattooed depressives with huge online followings and a knack for genre deconstruction—but they had never met. Some of Peep’s friends have argued, on social media, that Peep would have rejected the partnership, and protested XXX’s treatment of women. The song was originally a collaboration between Peep and his friend, the rapper ILoveMakonnen, but a snippet caught the ear of XXXTentacion before he died, and he recorded part of it with ILoveMakonnen. After he passed, his handlers and producers worked to keep him on the song. This was done with the blessing of ILoveMakonnen, but not, at first, with the approval of Womack. And, though there may have been some artistic vision behind the collaboration—certainly the two shared musical chemistry—the decision to bring them together had a commercial motive, too. XXX is a music-streaming behemoth, and his name guarantees that a song will receive a massive amount of play and attention.

At the listening event, where Makonnen strolled around with his jacket hood over his head, no mention was made of this collaboration. The song was not played over the speakers. But when the album arrived on streaming services on Friday, it had two additional tracks: the collaboration with XXXTentacion, and the original version featuring ILoveMakonnen. In her speech, Womack did not address the collaboration—at least, not explicitly. “Study the artist, his words, and his work. Listen to him. Don’t chop it up and put features on it unless it’s somehow clear to you that that’s O.K. with him,” she said. “Honor the young talent by honoring the work.”

Failed US Ballistic Missile Interception? That Will Cost $130 Million

Sweden Used as ‘Haven’ by Potential Terrorists – Migration Board Head