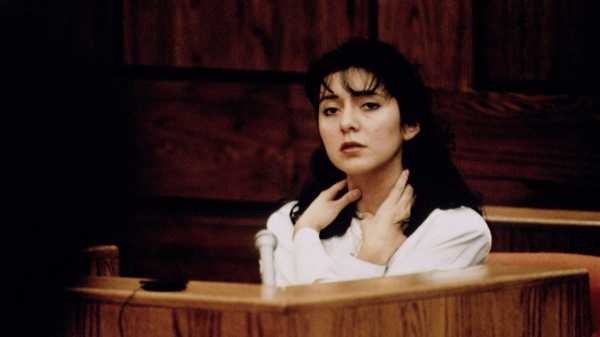 There are many salient moments in “Lorena,” a four-part Amazon documentary series, released this week, which revisits the indelible story of Lorena Bobbitt and John Wayne Bobbitt a quarter century after it made international headlines. But it seems appropriate enough—in an age when the adult-film actress Stormy Daniels has proven herself to be far the moral and intellectual superior of the President of the United States—that the most sagacious observation about the hold that the Bobbitt saga has on the public imagination should be made by a veteran sex worker called Air Force Amy. “Cut a million clits off in Africa, and nobody hears a word,” Amy says in the final episode. “Cut one dick off, and the whole fucking country stops.”

Amy was acquainted with John Wayne Bobbitt from his short, inglorious stint, in the late nineteen-nineties, as an inept factotum at the Moonlite BunnyRanch, a legal brothel outside Carson City, Nevada. (I spent time at the BunnyRanch, and interviewed Air Force Amy, for a story in 2001.) Bobbitt got the gig—part of a public-relations stunt orchestrated by the BunnyRanch’s late owner, Dennis Hof—five years after the event that defined his life and that of his ex-wife, Lorena Bobbitt, who now goes by her maiden name, Gallo. The incident—as it is circumspectly referred to by many interviewees in the documentary—occurred in the small hours of one morning in June of 1993, when Lorena, who was twenty-four years old, sliced off the penis of her twenty-six-year-old husband, John, while he was sleeping. She then left the house and drove five hundred yards before tossing the severed member from the car window; it was later retrieved by emergency-service workers and reattached via microsurgery. Lorena claimed that her actions were precipitated by John raping her earlier that night, and John was tried for marital sexual assault. He was acquitted, as was Lorena, by reason of temporary insanity, in a subsequent trial for malicious wounding; she was remanded to a psychiatric hospital for five and a half weeks before being freed.

As Air Force Amy points out, back in the early nineties, John’s penis—its precipitous detachment and its miraculous resurrection—proved to be the most compelling character in the Bobbitts’ narrative, which was luridly attended to by tabloids and more respectable media alike. (Tina Brown, the editor of this magazine at the time, dispatched Gay Talese to cover the Bobbitts, although she later called him off the story.) “Lorena,” too, begins on a phallocentric note. In the antic and often grimly comical first episode, we meet John’s urologist, Dr. James Sehn, who can’t help but smirk when recounting the events of that June night, describing the penis as “lost in action,” and noting that he feared his only surgical option would be to consign John to a humiliating fate in which he would “sit to pee like a woman for the rest of his life.” John himself is introduced as an interviewee, plumping down into a double lounger in a Las Vegas living room to tell his story; moments before, the camera lingers on a well-stocked knife block in his kitchen. John’s cousin Todd Biro seemed to represent the prevailing view of the incident when he remarked, on a talk show at the time of the incident, that being mutilated in such a fashion was worse than being killed. He said that Lorena “took away the thing that means most to a man.”

The thing that mattered most to John is shown, in “Lorena,” in more graphic detail than I recall from coverage of the incident in the nineties: a surgical photograph of the organ pre-reattachment will make viewers squirm, no matter their genitalia. It bears no resemblance to the symbolic substitutes that were presented during the circus-like Bobbitt trials and their aftermath: the Bobbitt-themed hot dogs that were sold outside the courthouse, or the representation of a massively engorged member that served as the pointer on a meter registering the funds raised to pay for John’s medical bills on Howard Stern’s 1994 New Year’s Eve cable-TV special, on which John appeared as a celebrity guest. Lying shrivelled upon a blue cloth, jaundice yellow but for the bloody end where it was sliced off—apparently as cleanly as sashimi—the severed penis is instead a listless nubbin, small and sad: not a pound of flesh so much as a few pathetic ounces.

Still, it is the enduring symbolic power of the penis which gives the documentary its cumulatively disquieting effect. “Lorena” is only the latest in a string of recent revaluations of news events of the nineties, beginning with the documentary series “O.J.: Made in America,” a revelatory examination of the ways in which racial conflict and the issue of police discrimination were refracted through the murder trial of O. J. Simpson. (Jordan Peele, one of the producers of “Lorena,” has cited the series as an inspiration.) The movie “I, Tonya,” a comedic dramatization of the story of Tonya Harding—a champion ice skater who became notorious in 1994, after her ex-husband orchestrated a kneecapping of her rival, Nancy Kerrigan—compelled viewers to look at that story again through the lens of class, and in light of restrictive cultural expectations of femininity. (In “Lorena,” David Kaplan, a reporter for Newsweek, notes how a cover story he wrote about the Bobbitts was displaced by the Harding-Kerrigan event. “My tabloid story was out-tabloided,” he says.) In the podcast genre, the second season of “Slow Burn,” which focussed on the investigation of Bill Clinton’s affair with Monica Lewinsky, offered a belated reframing of that late-nineties story in the light of differing power dynamics, decades after Lewinsky was widely reviled for her role in the affair. (It was a virtue of that podcast, and of a similarly themed documentary series about Clinton’s impeachment that premièred last year, that they called the political crisis the “Clinton Affair” rather than the “Lewinsky Affair,” as it had been routinely characterized. While the titling of “Lorena” tips the series’ hand about where its sympathies lie, the use of only the female protagonist’s name does feel mildly exploitative.)

Contra Marx’s dictum that history repeats itself first as tragedy and then as farce, here, the history that first transpired as farce is in “Lorena” recapitulated as tragedy. The series reminds viewers how the telling of the story was often racially charged, with Lorena characterized by the stereotype of a hot-blooded Latina, and it reminds viewers that various Hispanic communities rallied to her support, a part of the story that did not take precedent in coverage at the time. It also shows how the case intersected with rising public consciousness about domestic violence, and it charts the course of legislative change, with Congress finally passing the Violence Against Women Act, in 1994.

The series makes extensive use of footage from Lorena’s trial. It shows her tearfully enumerating the occasions on which she was forced, against her will, to submit to anal intercourse, and it shows acquaintances of John testifying that he would brag about his taste for rough sex. These segments are almost unbearable to watch and quash any lingering idea of Lorena as a vengeful wife rather than a repeatedly brutalized, traumatized victim. And “Lorena” reminds viewers who have not kept up with tabloid headlines that 1993 was not the last time John was accused of a violent act against a spouse or partner. The documentary includes an interview with a former girlfriend of John’s named Desiree A. Luz, whom he met at the Moonlite BunnyRanch, where she was working as a sex worker. Luz recounts, at length, a harrowing story of rape and torture. (In January, 2000, John was found guilty of a charge of harassment.) But the revealing final moments of the last episode, in which John reflects upon his family’s history of violence, complicate any simplistic condemnation of his temperament: he is a victim, too.

Most salutary is the way that “Lorena” reveals what happens when symbols of manhood are under threat—a subject as relevant today as it was in the early nineties, when John’s penis became a potent stand-in for masculinity itself and the cultural response to Lorena’s act suggested what might ensue when masculinity is robbed of its potency. (In John’s case, the literal loss was only temporary, which his subsequent short-lived career as a porn actor confirmed.) Discussions about what Lorena had done and why she had done it were mediated through an awkward veil of humor—a practice that has persisted even in more recent coverage of the story, as when Lorena appeared on Steve Harvey’s daytime talk show, in 2015, to promote the cause to which she is now devoting her professional life, the Lorena Gallo Foundation, a nonprofit that assists battered women. “What made you take it, though?” Harvey asks, as the studio audience titters. Lorena smiles, like she does in the documentary when she recounts the events of June, 1993: her act was so outrageous that it scandalizes even its actor.

The raucous humor that still surrounds the story—that made the Bobbitts a punch line for decades—disguises an unbidden and unwelcome sense of vulnerability on the part of that half of the population who had hitherto not been obliged to think of their intimate body parts as means by which they might be violated. It takes a comedian, Whoopi Goldberg, to articulate, in a clip from her show, the unfunny truth behind the humor. “Women live with the knowledge that weird shit can happen at any point—you go down a dark alley and whoosh, somebody grabs you,” she says. “Now men actually have to think about this shit.” Violence against women is so routine that it’s unremarkable; women’s vulnerability to violence is a cultural given, understood by women themselves at a cellular level. When the worst thing that can happen to a man happened to John, it was a singular and sensational occurrence, forever lodged in our cultural memory. “Lorena” reminds viewers that the worst thing that can happen to a woman happens all the time.