Home Culture Love, Death, and Begging for Celebrities to Kill You | 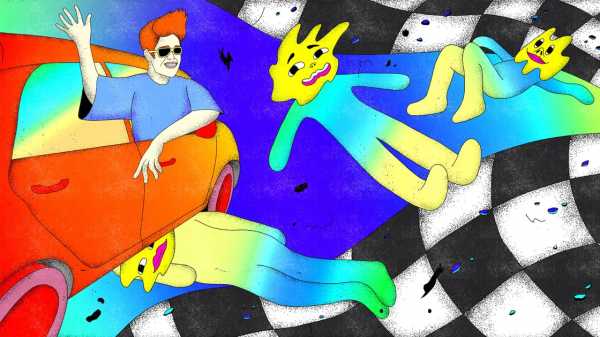 The first time I noticed that quite a lot of people on the Internet seemed to be begging celebrities to kill them was a couple of years ago. “Can lana del rey step on my throat already,” one person tweeted. “Snap my neck and hide my body,” another announced, when Lady Gaga posted a new profile photo. Taylor Swift could “run me over with a tractor and I’d say thank you and ask her if she wants to do it again,” another wrote. If you performed a cursory search, you’d find hundreds of such messages, mostly lobbed by young millennials and members of Generation Z. There was an emphatic queerness to much of this discourse, whether or not the person tweeting identified as anything but straight. Many of the messages were about women and sent by women; the subset of men who attracted these tweets tended to be girlish, in a boy-band way. There were lots of appeals to sweetly handsome Korean pop stars, lots of “harry styles punch me in the face” requests, lots of wishes for the still-babyish Justin Bieber to run people over with his car. Nowadays, on Twitter, every hour brings a new crop of similar entreaties.

One takeaway from all this is that young people really love celebrities. Another is that we’re craving unmediated connection so desperately that we would accept it in the form of murder. It’s also possible that we simply want to die. Earlier this year, at the Cut, in a piece about the upswing of “run me over” tweets, Gabriella Paiella observed that the popularity of these jokes can’t be separated from the ambient fatalism inculcated by attention to actual real-world problems—“the fact that we’re living during a time when we’re constantly being reminded that the Earth is going to be virtually uninhabitable by the end of the century, that capitalism is wholly unsustainable, and that we’re just one push of a button away from perishing in a nuclear war.” Paiella talked to the writer Brandy Jensen, who had recently tweeted that her primary reaction to seeing a hot person was to think “back over me with a truck.” Everyone, Jensen said, seemed to be constantly posting about how they were horny and how they wanted to die; it was natural that the two would converge.

Devotion, by its nature, tends to invite agony. “Love has brought me within the reach of lovely, cruel arms that / unjustly kill me,” Petrarch writes, in Robert M. Durling’s English translation of “Rime Sparse,” a set of poems written in the fourteenth century. Shakespeare’s “Venus and Adonis,” published in 1593, describes Venus as a maiden who “murders with a kiss.” In the early seventeenth century, John Donne famously begged, “Batter my heart, three person’d God.” (A degraded Internet-era version of the poem, “Holy Sonnet 14,” might involve the impassioned poet pleading with God to choke him.) But this language appears to be spilling over. It may originate in a sort of erotic consecration, but love and pain, joy and punishment, seem increasingly convergent, at least in the ways that people express themselves online. Love may be timeless, but the half-ironic millennial death wish has become an underground river rushing swiftly under the surface of the age.

Earlier this month, I got on the phone with Mistress Velvet, a dominatrix in Chicago with a day job in social work, to ask her what she made of all this. She’d started noticing the prevalence of punch-me-in-the-face talk in 2011, she told me, when she was first coming into her queerness, in her early twenties. “Saying that I’d ‘literally let her stab me’ was a way of linguistically valuing my queer relationships over my heterosexual ones,” she said. “But I’ve also become interested in it in the context of B.D.S.M.” Mistress Velvet told me that, when clients came to her with this sort of intense sacrificial devotion, they often were seeking replacements for powerful people who were absent from their lives. “It reminds me of when I transitioned from Christianity to atheism,” she said. “I was suddenly afraid of death—I was nihilistic—and I had to find something else that could fill that gap.”

That parallel had never occurred to me, I told her.

“I mean, if we’re thinking of it,” Mistress Velvet said, “Jesus died for our sins, and believers are supposed to give our lives back to him. My clients sometimes talk to me like this. They’d let me run them over with a truck. I’m like, ‘That’s not even what I want! Your life is sacred!’ ”

“Right,” I said, suddenly dazed. “Maybe it’s a dream of mutuality—of sacrificing yourself for someone in such a way that they would then be permanently tied to you.”

I messaged a seventeen-year-old Harry Styles fan whose social-media bio included the sentence “harry can run me over, use my crumpled corpse to wipe his car off and then use me to avoid puddles on the street.” She’d been on “stan twitter” since 2012, she explained, and “us stans have always been pretty harsh with expressing our love.” (A stan, as the Oxford English Dictionary now recognizes, is an obsessive fan of a celebrity; the term comes from the 2000 Eminem song “Stan,” and it can be used both as a noun and a verb.) “I say these kinds of things because . . . it would honestly be an honor for Harry to run me over,” she wrote. An eighteen-year-old whose Twitter bio was “tom holland could run me over with a truck and I would say thank you” told me, “Even just being near him or in his presence would make me sooo happy, even if it meant he was running me over with a truck.”

After perusing the ample and growing archive of tweets in which people ask Cate Blanchett to step on their throats, I messaged a twenty-four-year-old woman who’d posted a photo of Blanchett with the caption “she’s so tall pls step on my throat ma’am.” Step-on-my-throat language, she wrote back, was all about “the LGBTQ people who just love to love and support women, and get more creative every passing day. its our safe place.” Plus, she added, “It’s Cate freaking Blanchett, you’d do anything she wants you to do.”

But not all run-me-over tweets direct their sentiment at an object. Plenty of people on Twitter are begging to simply be run over, stepped on, punched in the face. The Twitter user @alwayssaddaily, whose name is stated as simply “Anxiety,” recently posted a series of emoji snowflakes that formed a giant “F,” followed by “UCKING RUN ME OVER.” It received twelve hundred likes. “I honestly feel that this new trend of expression is because people in society as a whole these days are becoming more and more numb to life and are losing perspective on the physical part of reality, which in turn causes the brain to react and express things a certain way in order to satisfy the need for feeling in our bodies,” the twenty-year-old woman behind the account told me. “Life is becoming increasingly redundant, which makes me iterate these thoughts out loud to myself—hit me with a car, fucking kill me—for psychological satisfaction.”

In “Civilization and Its Discontents,” published in 1930, Freud wrote about the unconscious sense of guilt he attributed to his patients, who tended not to believe what he was suggesting; it was hard to become conscious of being unconsciously guilty. “In order to make ourselves at all intelligible to them,” he wrote, referring to the approach that analysts took with such patients, “we tell them of an unconscious need for punishment, in which the sense of guilt finds expression.” In this framework, masochism is the ego’s desire to atone.

In my life—which is mostly, I would say, a vibrant and happy one—this masochistic tendency surfaces constantly, in a sidelong way. About a month ago, while spending a rowdy weekend at a music festival on the beach with nine other people, I started counting the jokes we made about walking into the ocean and dying together. A friend and I kept talking about drowning each other “as a bit.” For me, the capacity to experience such unfettered pleasure—the fact of having the time and capital and freedom required for it, at a time when we know that so many people’s lives are worsening—is often what instigates the murmur of guilt. I do deserve to be run over with a dump truck, I think, at home, opening my delivery packages, thinking about how much plastic I have put on this planet, how much labor I have exploited for the sake of my own convenience. Longing and guilt intertwine every time I think about having children, who, if they exist, will exist in a world defined by man-made crisis and natural disaster. On the beach, flooded with joy, I felt the tug of that familiar undertow. “Fucking kill me,” I thought, suddenly desiring a sensation strong enough to silence itself—which is, I suppose, one way of defining love.

What is Known So Far About Stabbing Attack Near US Synagogue

Zero Sum Game: The US Rolls Out ‘Trade War’ Ultimatum for...