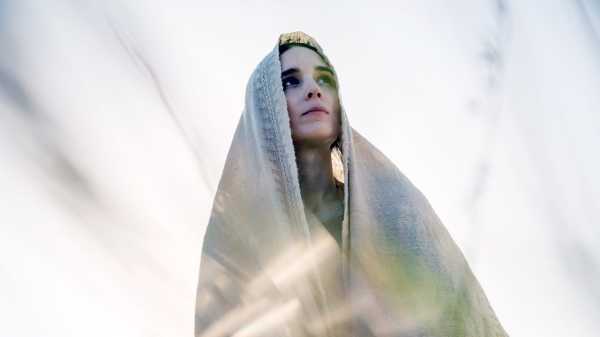 “Mary Magdalene,” released on Friday, is a historical drama that stars Rooney Mara, as the eponymous follower of Jesus, and Joaquin Phoenix, as Jesus. The film, directed by Garth Davis and written by Helen Edmundson and Philippa Goslett, presents a revisionist portrait of Mary Magdalene, correcting the millennium-plus misconception that she was a sex worker—a notion that (according to a pair of title cards) derives from a decree of Pope Gregory I, in 591, and that the Vatican has officially repudiated. “Mary Magdalene” tells the story of a Jewish woman, from the town of Magdala, who left her family to follow Jesus and proved to be a crucial—perhaps the crucial—member of his circle. Attempting to dramatize the idea of a woman’s centrality to the rise and spread of Christianity is a notable response both to cinematic tradition (in such movies as “The Last Temptation of Christ” and “Hail Mary”) and to inherited myth, which makes the movie’s sludgy triviality all the more dismaying.

The unmarried Mary of Magdala, whose mother is dead, is a midwife who lives under the strict rule of her father and, above all, her brother (Denis Ménochet), who orders her to marry a widower. Possessed of a vague but strong religious feeling, Mary attempts to pray among men in the synagogue but is cast out for intruding on a space reserved solely for men; she is then subjected to a watery exorcism in the Sea of Galilee that nearly becomes an honor killing. She survives, barely, and receives a visit from an itinerant healer—Jesus, who has arrived to preach to the villagers and, while there, leads them to the sea for baptism. Mary then abandons home and family to join Jesus’s followers, some of whom aren’t thrilled to have a woman among them. But Mary proves both her empathetic devotion to Jesus and her effective activism among women in towns that the group visits.

Mary Magdalene, the first to see the empty tomb of Jesus and to make known the Resurrection, is now considered by the Church to be the “Apostle to the Apostles” (as decreed in 2016). Davis brings to this exalted story the same generically fulsome emotion and stylistic sensibility that he displayed in his previous film, “Lion.” Though afflicted with the stodginess and staginess that characterized Biblical dramas of the nineteen-fifties, “Mary Magdalene” entirely lacks their sense of spectacle. Neither a character with psychological depth nor a prophet with a holy vision, Davis’s Mary Magdalene is reduced to a good soul and an empathetic helper whose most significant achievement is avoiding imposing her own ideas on Jesus’s mission, avoiding impeding him from pursuing his chosen path, and avoiding saving him from the consequences of his actions. She is, in effect, an enabler at a very exalted level (for which her midwifery makes a facile metaphor), and, in placing her in this virtually supporting role, Davis also renders her insubstantial—not passive, certainly emotionally engaged, but diffuse and content-free. Her spiritual quest is blank, effaced. Such transformative historic moments as Mary Magdalene’s recognition that the tomb of Jesus is empty, and her subsequent encounter with his resurrected form, are neither physically direct nor emotionally sublime.

Davis can’t do miracles, he can’t do wonders, and he can’t do plain and simple physical action, either. He conveys neither the ordinary nor the extraordinary, neither simplicity nor complexity; he relies on approximate stagings of large-scale events chopped into moments of superficially subtle expressivity. The film’s dramatic repertory is a series of soft-toned grimaces and frowns, dewy-eyed longing looks, wide-eyed gazes of admiration, and fierce brow scrunches shading sharpened stares—mainly composed in postcard closeups that detail the costumes’ upmarket rusticity as much as the card-file repertory of “significant” expressions. Within the confines of such direction, Mara is left with little to do beside follow along.

And what does Jesus do? As for Phoenix, his performance is hindered by a grotesque set of directorial choices. Phoenix is a craggy, dour Jesus, a scourger and self-scourger who’s closer in tone to an Old Testament enforcer than a liberator of the spirit. For the most part, Phoenix is an actor in search of a rare filmmaker whose own sensibility is both as glowing hot and as exacting as his own. (The artistic coupling of Phoenix with James Gray is one of the exemplary partnerships of the era, and his work with Paul Thomas Anderson in “The Master” comes close.) Yet Davis, unwilling to conceive earnestness of purpose without sternness of mien, reduces the role of Jesus to intent glowering. He relies on the strength of Phoenix’s presence to add substance to a vision of Jesus that, without it, would be as limp as an empty cloak.

What’s more, the movie features an international cast of actors, including American, French, British, and Israeli ones, who, through slapdash or clichéd direction, generate a layer of unintentional comedy: they speak with a variety of accents, whether their own or ones crafted for the movie (early on, Mara seems to be trying out an Israeli accent that doesn’t survive the early scenes). The script isn’t quite in English, either—rather, it’s in the distinctly cinematic language of Histor-ese, the constrained and stilted tongue with which screenwriters conjure the remoteness of past times. The resulting dialogue doesn’t come close to the exaltation or drama of the story: it lacks both Biblical poetry and free expression.

There’s exactly one image in the film that reflects a modicum of directorial imagination—the suicide, by hanging, of Judas, which Davis depicts after the fact, by means of an extended zoom from far away, showing a hillside village of stone houses and eventually revealing the body to be hanging in one of their portals. The movie offers a peculiar view of Judas—namely, that his betrayal was possibly motivated by a desire to set in motion a worldly revolution that he finds implicit in Jesus’s teachings. As contrived as the notion may be, the performer in this role steals the movie, in more ways than one. As Judas, the French actor Tahar Rahim (most famous here for “A Prophet”), shows that he’d have been a magnificent Jesus. Rahim has an ardent twinkle in his eye, a quietly impulsive openness that would have brought joyful wisdom, childlike innocence, and a sense of redemptive good news to contrast with the burdens of religious and civil law. In Rahim’s inspired performance, Davis displays the inspiration of his cinematic unconscious: burdened by his own narrow and dull sense of purpose, the filmmaker leaves the force of imagination, modest but irrepressible, to the margins, and it takes over.

Over 2 Tonnes of Diesel Spills in Ocean Near Galapagos Islands...

Paul Pogba turned the game around for Manchester United – and...