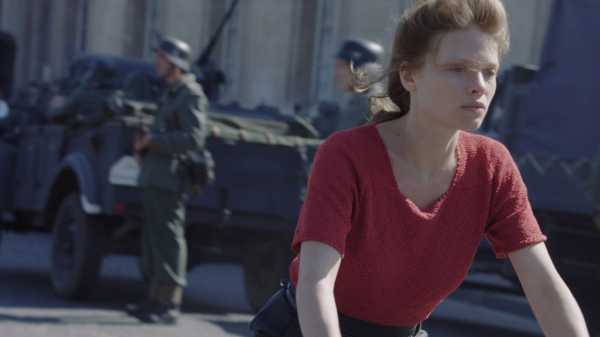 Few great works of literature get any advertising at all, but Marguerite Duras’s “La Douleur” (literally, “Pain”), from 1985, which was drawn largely from her own Second World War experiences, has received what is, in effect, a feature-length commercial—an adaptation by the writer and director Emmanuel Finkiel, out this Friday, called “Memoir of War.” The film, even if considered a two-hour-plus trailer, risks misrepresenting Duras’s great book in the same way that many two-minute trailers misrepresent great films—by making a work of severity and originality seem mild and familiar.

“Memoir of War” (released in France as “La Douleur”) is set during the Second World War, in Paris. It opens, briefly, in April, 1945, where a writer named Marguerite Duras (Mélanie Thierry) is desperately hoping for news about her husband, Robert Antelme (Emmanuel Bourdieu), an activist in the French Resistance who has been arrested. Then the action shifts back to June, 1944. Marguerite, seeking information about Robert, goes to a German police office in Paris and is received warmly by a French collaborationist official named Rabier (Benoît Magimel), who has literary aspirations of his own. He accepts, and claims to deliver, a package from her to Robert; claims to arrange for Robert’s decent treatment; and asks Marguerite to continue meeting with him.

But Marguerite is also active in the Resistance—so is her lover, Dionys Mascolo (Benjamin Biolay), who is also a friend of Robert’s—and, in their cell, the risks of her seeing Rabier are debated. It’s decided that she’s to continue, and the first half of the film is centered on a cat-and-mouse game, in which Marguerite hopes to get help for Robert and Rabier hopes to get information on other resisters from Marguerite. In the course of her encounters with Rabier, the course of the war shifts—the Allies have landed in Normandy, the German occupiers are on the run, the Resistance is emboldened (though still endangered), and formerly arrogant collaborators are now scared. Then Paris is liberated, Rabier vanishes, and Marguerite waits for Robert, in increasing panic, as deportees return from German captivity or news of their death arrives. Her ongoing work with a resisters’ committee for repatriation and reunion only heightens her pessimism and deepens her despair.

Even viewed without reference to Duras’s book (Barbara Bray’s translation has been published here in the U.S. as “The War”), “Memoir of War” is a movie that dreadfully empties a vast experience, that reduces colossal events to dramatic simplicities and trivializing shortcuts. Most filmmakers, like most people, have much of note to say about their lives—but, when experiences veer toward the extraordinary, whether death or pleasure or violence, the artist’s depth of insight and powers of imagination are severely tested. In “Memoir of War,” Finkiel displays a narrow perspective that conveys extreme experiences as a series of cinematic banalities.

Finkiel’s film is a creamy, standard-issue historical romance, visually and tonally indistinguishable as a personal vision of the movie’s events. Scenes offer touches of narrative import while offering little of originality—in diction, gesture, or presence—from the actors. (As Duras, Thierry is miscast, or, likelier, misdirected; there’s nothing in her performance that suggests an intimate relationship to language.) What’s missing, above all, is a physical element. There’s almost nothing physical in the film; even the beating by a crowd of a suspected collaborator shows a man with a bloodied face, but not the act of beating. The movie is generic, in the literal sense. It offers a series of clichés of the war-film genre, such as the Gestapo building decked out with Nazi flags; the Liberation of Paris, with its cheering and its dancing; and, worst of all, the crowds of skinny men in striped concentration-camp uniforms.

These scenes, which emphasize approximate representations of historical phenomena, at once dematerialize the story and de-intellectualize it. Finkiel eliminates not just the physical specificity of the events and actions that Duras describes but also the complex, deadly, morally demanding decisions that such specificity imposes—decisions that form the very heart of her book. The most controversial part of “La Douleur” is Duras’s account of taking part, after the Liberation of Paris, in the torture of a collaborator. She didn’t lay hands on him; she directed the interrogation and ordered her two younger male colleagues to beat the suspect—“this betrayer of Jews and members of the Resistance”—until he answered her questions. The torture, she writes, “creates a split in the solidarity of the group.” But Duras is not at all apologetic. She writes, “The more they hit and the more he bleeds, the more it’s clear that hitting is necessary, right, just.” She adds, “You have to strike. There will never be any justice in the world unless you—yourself are justice now.”

There isn’t a trace of this in “Memoir of War.” The movie’s honeyed light, its softened surfaces, mirror the quality of its dramatic depictions. Physical hardships, the menace of arrest, the threat of death, and the prospect of killing are all downplayed throughout the film. Finkiel also smooths out the time frame of the book, eliding the urgent, involuntary power of memory—perhaps the most crucial aspect of Duras’s work. She is, alongside Proust, the great French writer of memory and subjectivity, qualities that Finkiel approaches either fussily, fretfully, or hardly at all. His movie includes a few flimsy varieties of cinematic subjectivity—mainly Thierry’s voice-over, which replicates passages from the book— but they only explain the action or move it ahead. In suppressing inner detail and experience, Finkiel eliminates what’s extreme in Duras’s vision, analysis, and emotion. He renders her ferocity genteel.

What’s missing from “Memoir of War,” along with the book’s physicality and subjectivity, is its paradoxical sense of freedom—the freedom that comes with the proximity of death, with the imminent prospect of killing or being killed. Duras’s tactile awareness of holding her own life, and the lives of others, in her hands makes for grand terror and ludicrous humor. Her prose in “La Douleur,” as throughout her œuvre, is rock-hard with the solidity of facts. Those facts are as much inner as outer, as much intellectual as observational, and, if they give way, they expose the absolute void of delusion and madness. That’s why the opacity of her writing is the opposite of cold—it’s full of the pugnacious, confrontational passion of experience, including the confrontational experience of writing itself.

For that matter, the book is a much wider and fuller work than the film that bears its title suggests. Finkiel ignores an autobiographical section of “The War,” one that describes the time that Duras spent alongside a young collaborator named Ter, who is about to be executed. He also ignores two fictional chapters, a stark tableau of another collaborator being held in a wasteland on the outskirts of Paris, and an intimate, quasi-theatrical sketch of a Jewish girl in Paris who faces death and lives to write. Finkiel doesn’t distill the book; he doesn’t even sample it with a personal amplification of exemplary details. Rather, he shrinks its multi-layered, fragmentary complexity to a simple, self-satisfied completeness.

“Memoir of War” offers no suggestion, in style, performance, or imagination, of surfaces and depths, of an awareness that the book being adapted is more than a synopsis of events. It’s a work of art that derives its power as much from its mode of composition as from the subjects that it conveys. It ultimately offers very little of what makes the book worth reading. If exhibitors wanted to do honor to the movie’s source—far more honor than the movie itself does—they could turn their theatres into salons. Upon buying their tickets, viewers would each get a copy of “The War” and be ushered to their seats; instead of the lights going down, the lights would go up; and for two hours and seven minutes one could have an uninterrupted stretch of time to get far into the book.