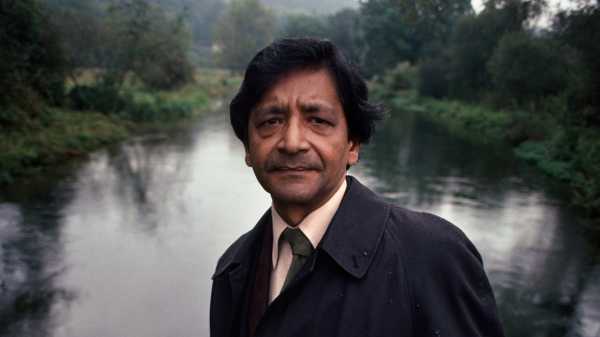 With a sighing emptiness of soul, feeling that I was saying goodbye, I visited Vidia Naipaul in his hospital room in London. This was in June. He strained to speak, but we managed to hold a conversation, and he smiled when I reminded him of trips we’d taken together in East Africa, more than fifty years ago.

Later, I remembered how I’d first met Naipaul, in Kampala, Uganda, visiting him at his house at the margin of the Makerere University campus. His wife, Pat, was seated, her head down, weeping in frustration through her fingers. Naipaul was pacing, in a froth, shouting, “Listen! Do you hear the bitches!” because the house he had been assigned to live in for a year was a small bungalow in a compound of identical bungalows, next to a rickety fence. Just beyond the fence lay a set of improvised shacks, where music was playing. “Bongos!” he went on. “One can’t work with these bongo drums! You must help me.”

I accompanied him to the housing office and, while he fumed, I explained the problem: Mr. Naipaul, newly assigned to the English department as visiting writer, found it impossible to write in the house he’d been given.

The housing officer said, “Everyone gets those houses.”

Naipaul stared at the man and said, with a sneer, “I’m not everyone.”

He was only thirty-four years old, but already crusty and uncompromising, and, in a defensive way, weirdly pompous. He had published seven books, including his masterpiece, “A House for Mr. Biswas,” as well as his classic book about India, “An Area of Darkness”; and he was near the end of his novel, “The Mimic Men.” He had the stuffy habit of using the pronoun “one,” as when he said (often), “One has no interest in meeting those people,” or used the word “latterly” as in “Latterly, one drinks spirits less and less.” He was opinionated on unexpected subjects. “I hate music,” he said to me, and he laughed, adding, “I told a man that once and he burst into tears.”

He took to me for a simple reason. I had read everything he’d written. Great writers then, and now, seem powerful and shamanistic to me: at their best, enchanters. When it was announced that Naipaul was coming to Kampala, I bought what books of his were available and borrowed the rest from the library. I loved his work and, in person, I was impressed by his certainties, by his willingness to do battle, making his little bungalow a casus belli. He saw I was reading Orwell. He said, “One has been compared to Orwell. It’s not much of a compliment.” He read Thomas Mann and R. K. Narayan and Shakespeare. For “The Mimic Men,” he looked into the Bible, and, one day, he tapped it with his finger and said, “It’s not bad, you know,” and laughed, because he’d found a passage of Scripture that moved him.

I was twenty-five years old, and at that point had been in Uganda for almost four years. I spoke Swahili, I had a car, and my teaching job in the Department of Extra Mural Studies took me around the country, from the Sudan border in the north and Rwanda in the south, to the Congo border in the west—we knew of the fighting in Katanga. What we did not know was that Che Guevara was leading the guerrilla offensive.

Naipaul was often unhappy with his driver, and so I became his driver and began to call him Vidia—he in the front seat, Pat in the back. They often quarrelled, sometimes over trivial things, such as the meaning of the word epicenter, or more serious ones, such as the future of the caste system in India. Like many bickering couples, they knew just what buttons to press.

“Show me something you’ve written,” he said. I showed him the typescript of a novella, called “Murder in Mount Holly.” He read it carefully, making notes in black ink on the pages, and said, “One enjoyed it.”

What every aspiring writer yearns for is the approval of an older established writer; to be told “Yes, you have it, just persevere and you’ll be all right.” He gave me that, and it meant everything.

We motored on bad roads around the country and into Rwanda. I drove him to Kenya, where he took up residence in a rural hotel in the highlands to finish his novel. He abandoned his students. What I did not know at the time was that, in spite of the brilliance of his books, Naipaul’s career was precarious. He had won prizes, but his books made little money. He had come to Africa on a grant from the Farfield Foundation. (It was C.I.A.-funded, but he did not know it at the time.) He talked constantly about being hard-up, and how it was Pat’s income as a school teacher that kept them solvent. When I told him I had fallen in love and was planning to be married, he said, “I hope she has a job.”

After a while, I understood him to be depressive. He was asthmatic, he slept poorly, and he complained of insomnia. His work always went slowly, but he said, “Beware of writing that goes fast—that’s a sign it’s probably bad.” He was a man of rules, and his rules kept him alert. “Never allow yourself to be undervalued—why should one be paid less than a great architect, or lawyer, or surgeon?” “Never give a person a second chance,” was another one. “If someone important to you lets you down, you must release them.” Reflecting on Africa, he said, “Hate the oppressor—but fear the oppressed,” a thought he put into his novel.

As for writing: “Always ask yourself, ‘Why am I writing this?’ If you don’t have a good answer, abandon it.” In contrast to this, he also said, “A writer often works toward conclusions of which he is unaware, until he finishes.” Another: “Don’t play with art.” There was no whimsy in Naipaul, no trickery, no artifice, nothing mannered or magical—he hated the conceit in beautiful sentences, he disliked Borges’s stories and most of Faulkner; he admired Richard Jefferies’s style, which he called “brambly.”

His belief, his severity in reading my work (“I warn you, I’m brutal”), his pride in his own work—he truly believed in his gift—helped make me a writer. When my work succeeded, he was proud of me; but he felt that he was poorly represented, that his publisher took him for granted, that in spite of his many prizes and honors his readership was small. With a new agent and different publishers, his fortunes improved. But, with more people listening, he became ever more a provocateur, claiming that women can’t write, that James Joyce is overrated, or that Princess Anne’s daughter had “a criminal face.” In all the obituaries that have been written, there are many instances of these—Vidia’s tantrums and provocations, his outrageous, mood-driven frustrations.

But he knew when he was being irrational or unfair, voicing the darker side of his nature, and, though he disparaged Joyce, he experienced the remorse Joyce called “agenbite of inwit.” One of his favorite writers was Montaigne—indeed, he said, “I am a new man, as Montaigne was a new man.” And he’d read the passage in the essay “On Glory,” where some apt lines occur: “These discourses are, in my opinion, very true and rational; but we are, I know not how, double in ourselves, which is the cause that what we believe we do not believe, and cannot disengage ourselves from what we condemn.”

The death of Pat was a crisis, and within a very short time he broke off relations with his longtime lover, and met and married Nadira Khannum Alvi, who became his lover and protector, housewife, reader, chef, driver, and manager of his literary affairs. After a few misunderstandings, I was sidelined under the rule “Never give anyone a second chance—especially the person who had been loyal.”

Vidia was at last happy at home and still productive. The upshot of our estrangement was that I had a fabulous subject: my thirty-year friendship with him, which I recounted in “Sir Vidia’s Shadow.” It seemed to me a great opportunity, because so many books chronicle love affairs, but how many about friendship, that purer connection, especially one that goes sour?

Ten years passed in silence. At the Hay Festival, I was sitting with Ian McEwan when Naipaul appeared at the door of a big tent, Nadira and her daughter supporting him on each arm as he moved slowly through the gathering, limping, breathing hard.

This instance of forgiveness (because my book had been unsparing) is one of the happiest moments of my life. So we reconnected, exchanged letters and phone calls. We met in India and in New York, and, to my great pleasure, Nadira formed a friendship with my wife, Sheila. More than a friendship—they describe themselves as sisters.

I especially loved being in India with him, because it was his obsessive subject. But, one day, a strange thing happened. We were being driven to Amber Fort, outside of Jaipur. Vidia looked out the side window as the car was delayed in traffic at a crowded intersection. A small boy, no more than four or five, was seated on a triangular section of broken pavement between two busy roads. The boy was neatly dressed, in a shirt and shorts, cross-legged on a folded square of cloth, at risk amid the confusion of traffic and pedestrians, sadhus, beggars, hawkers with baskets on their head, schoolchildren, bus fumes, pushcarts, motorbikes, and honking horns. The child was animated by the bustle, yet he was alone—no adult near him, no one attending to him.

Naipaul stared sadly at this odd and overlooked boy, and studied the scene for a long moment. As our car began to move on, he said to me, “I see myself in that child.”

The US just signed a deal that could send asylum seekers...