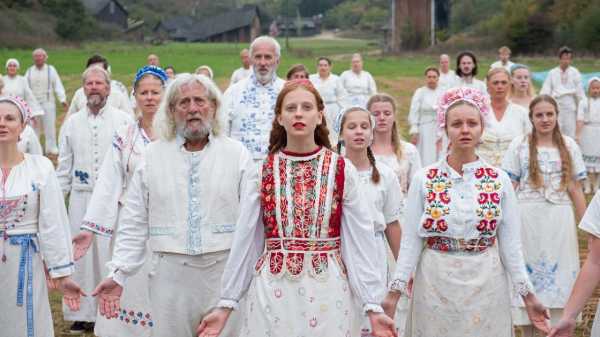 Ari Aster is a writer and director of cult movies—his two features, “Hereditary,” from 2018, and “Midsommar,” which opened last week, are both grotesque and gory dramas about cults. “Hereditary” showed a family’s destruction by an ancient curse, which turned a young suburban man into a mystical cult’s unwilling king. “Midsommar” is the story of a group of American graduate students who are invited, or lured, by a Swedish friend to a remote summer festival, which turns out to involve a series of ritual murders. Both films are built backwards—their elaborate setups are designed to generate particular images of horror. Their psychology is flimsy, their characters undeveloped beyond a small set of traits that lead, inevitably, to the films’ results. Aster lines up details that don’t merely invite reconciliation but provide virtually the entire dramatic experience. There’s a political tinge to those details, which presents an illusion of substance and a veneer of social conscience. In “Hereditary,” it’s a literal perpetuation of patriarchy; in “Midsommar,” it’s the fecklessness of a shitty boyfriend. But, in both movies, the imagery that gives them their emotional impact takes precedence over any dramatic considerations. In “Hereditary,” the less-ambitious film, the results are merely ludicrous; in the grander and more visionary “Midsommar,” they’re regressive, the product of a filmmaker who’s so busy looking at his images that he doesn’t see what he’s doing.

“Midsommar” begins with a tragedy. The protagonist, Dani (Florence Pugh), a psychology student, discovers a terrifying e-mail from her sister, Terri (Klaudia Csányi), who is bipolar. Home alone, Dani seeks the consolation of her boyfriend, Christian (Jack Reynor), a graduate student in anthropology, who’s hanging out with his male friends. After he grudgingly agrees to see her that night, Dani learns that Terri has killed her parents and herself. Several months later, Christian is preparing to take a trip to Sweden in the company of his fellow anthropology students, the earnest Josh (William Jackson Harper) and the frivolous Mark (Will Poulter), at the invitation of yet another classmate, Pelle (Vilhelm Blomgren). It’s supposed to be a guys’ trip, spiced with the fantasy of Swedish women awaiting them, and Christian has been keeping it a secret until soon before the departure date. Nonetheless, he again grudgingly invites the grieving Dani to come along, and, to his and his friends’ dismay, she accepts.

The exposition, setting up the premise for the trip, is both lugubriously long and trivializingly brief. The entire drama depends upon the relationship between Dani and Christian, but, in lieu of developing it, Aster drops details onscreen like index cards. Dani wonders, on the phone to a friend, whether she has been burdening Christian with her troubles. In a bar, Christian’s friends echo back at him that Dani is depending on him and “doesn’t like sex.” But little of their relationship is actually shown. Aster reduces the film’s central dynamic to something even less thoughtful than stereotype or cliché—he renders it as assumptions, as offscreen events that suffice to be filled in by viewers. He does the same with Terri’s agonies and Dani’s grief; he uses the theme of mental illness and constructs the thin and bare texture of Dani’s life not to consider her experience but to enable his plot. Orphaned and seemingly completely isolated, with no friends or other relatives, Dani is both tethered solely to Christian and vulnerable to the wiles of a surrogate family, however malevolent.

By the time the group gets to Sweden, the movie, only a few minutes old, is virtually over: it’s built on such a void of insight and experience, such a void of character and relationships, that even the first level of the house of narrative cards can’t stand. Not long after they arrive at the isolated grounds of the festival, it becomes clear to them that they’ve been lured into a sort of cult. The residents wear floral white robes and practice traditional arts and crafts, and they welcome their visitors with a cheerful round of hallucinogenic mushrooms. But the rigid order of their society quickly appears coercive and soon turns deadly, with the enforced ritual suicide of two elderly people. As the action proceeds, the film devolves into a sort of pseudo-anthropological version of “And Then There Were None,” as the visitors become, successively, victims of ever more horrific, ritually mandated killings.

The scheme of “Midsommar” revolves around its characters’ field of study, anthropology: the organization of society, the nature of culture. One of the crucial pretexts for the graduate students’ trip to the festival is that Josh is writing his thesis on summer-festival rituals across cultures and hopes to include this one in his research. What’s more, after his first experiences at the festival, Christian, who’s floundering in his field and unsure about his thesis topic, decides to make it his subject of study, as well, creating a rift between the two friends that further isolates both and renders them ever more vulnerable to the cult’s clutches. The trip’s anthropological basis, and the theoretical premise enfolding the elaborately imagined festival, suggests an admirably bold ambition on the part of Aster—a severe test of artistry akin to the grand design of Jordan Peele, who, in his second feature, “Us,” embraced a similarly vast view of social order symbolically, and that of Jim Jarmusch in his political zombie movie “The Dead Don’t Die.”

Yet the world-building of “Midsommar” remains at the level of information-dosing; Aster doesn’t imagine the story in relation to modern experience—there isn’t even the power of Google, with which his characters could put the rustic retreat of horror into context (or wonder at the lack of it). By binding his characters to the needs of the plot, Aster reduces the film’s grand purview to a petty grumble and, in the process, he uses the anthropological framework—likely unintentionally—as the basis for a smug and narrow-minded pathologizing of social science. After the suicides of the elderly people, the only other two visitors, Connie (Ellora Torchia) and Simon (Archie Madekwe), horrified, decide to leave the compound at once, and are, supposedly, being taken to the nearest train station by a member of the group—separately. That separation, obviously suspicious, is justified by one resident on the grounds that the only available truck is a two-seater, and one couldn’t sit on the other’s lap because, he says, “We don’t break traffic laws.”

That’s the best single line reading, the only truly memorable moment of performance, in the entire movie. It’s also the movie’s most meaningful, and grimmest, joke. Rulebound but lawless, living nominally in Sweden but utterly cut off from the supervision and regulation of Swedish law, the cult is the very essence of autonomy, of a freely chosen social organization that’s subject to no other civil authority—and that, at the same time, asserts its own sense of righteousness on the grounds of ancient and transcendent authority. In this sense, the subject of “Midsommar” is the absurdity and obtuseness of suspending moral judgment for other cultures in the name of curiosity, respect, or relativism.

In the course of the film, Dani sees the depths of betrayal to which Christian is willing to descend. (Is he groomed, drugged, desperate to ingratiate himself with his hosts, who are now also his thesis benefactors, merely monstrous, or some combination thereof? The movie doesn’t say; for all the time that the couple spends together, Aster doesn’t pause or detour to hear their thoughts.) Dani ultimately gets a measure of revenge—though even this, in Aster’s archly plotted script construction, offers Dani some mixed motives of her own, a measure of mercy along with her rage. It isn’t only anthropology that comes in for derision; Dani’s studies in psychology, too, are rendered ludicrous as much by the cult’s perverse cruelty as by her own unexplored and vague relationship to all of her experiences.

On the other hand, Aster is big on décor and costume. The architectural idiosyncrasy of the buildings on the vast property; the intricate wallpaper; the elaborate mural that shows, briefly but unambiguously, a woman cutting her own genitals; the floral arrangements and table settings; the sheafs and tarps laid out for hundreds of feet along the breadth and length of a pathway; the meticulous preparation of victims and laying out of corpses; even a few noteworthy special effects that conjure hallucinogenic states with wavery motions—all suggest a greater attention to eye-catching detail than to the lives or thoughts of the characters. Aster is after effects, not causes; doctrines, not ideas. Certain images of mutilated bodies, of violence, of gore, fulfill the basic requirements of the genre—they shock, they stir fear and revulsion, and they add an element of moral horror, the implications of which seem to have eluded Aster’s decorative gaze. Under the rhetoric of pleasure, freedom, and the warmth of a virtual extended family, Aster finds bloody totalitarian mind control. In the name of ethnographic interest, he finds complicity in evil. From the spirit of adventure and curiosity, he finds horror. In the end, the subject of “Midsommar” is as simple as it is regressive: lucky Americans, stay home.

Trump: Republicans to Vote for ‘the Weakest Candidate’ in New Hampshire...