Home Culture “Minding the Gap,” Reviewed: A Self-Questioning Documentary About What Happened to a... 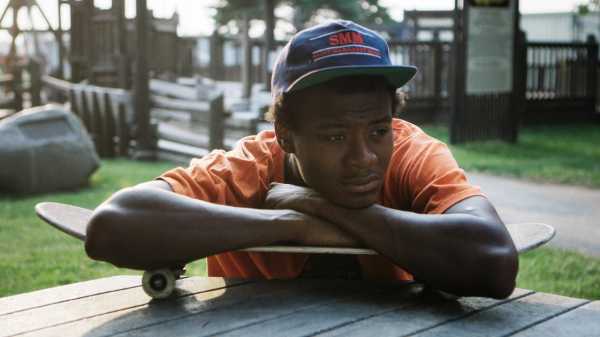 As a teen-ager, a decade ago, in the small city of Rockford, Illinois, Bing Liu filmed himself and his friends skateboarding. He shot much of his footage while skating alongside them, and, as a result, the skating sequences of his documentary “Minding the Gap” (which opens today in theatres and streams on Hulu) have a surging, gliding, soaring, joyously speedy energy that offers a hypnotic whirl and rush. Those images of skating, however, are merely the background and context for the film, and the diverting thrill that they offer is crucial to the film’s substance. That substance—domestic trauma, systemic racism, and economic dislocation—is also the very stuff of society, and the near-at-hand intimacy gives rise to a film of vast scope and political depth.

Bing (as we’ll call the onscreen person; we’ll call the filmmaker Liu) is Chinese-American; his closest skating buddies are Zack, who’s white, and Keire, who’s black (and who’s also a few years younger). A decade later, he returns to Rockford, visits with them, and films them in their current lives. Both Keire and Zack are high-school dropouts; Zack works as a roofer, Keire works as a dishwasher. Bing asks Keire about how he was disciplined as a child. Keire says that it would now be called child abuse—he was beaten by his father. Zack says that he, too, was beaten as a child. (In the film, Zack’s father doesn’t address these allegations.) Bing reveals to both men that he, too, was beaten as a child, by his stepfather, who married his mother when he was eight, and that his own experience is the reason that he’s here with a camera addressing the subject with them.

What emerges, in the course of the film, is that the three friends skated as a release, an escape, a sort of natural high to deliver them momentarily from the traumas and the agonies of their lives at home. The grace, the wonder, and the beauty of their balletic athletic skill, which begins the film as unalloyed youthful innocence and charm, is retroactively ravaged, as if X-rayed to reveal a deadly disease beneath its alluring surface. If the reckless, sometimes physically painful skating turns out to be deeply and irreparably symptomatic, the film—Liu’s investigations, his return home to the primal scene of his trauma—is both a mode of understanding and of self-understanding. In the process, Liu seems to help Keire and Zack achieve a measure of self-awareness and constructive advancement as well.

“Minding the Gap” builds Liu’s investigations, and the personal and ethical considerations that they entail, into the film. What he discovers—and films—of his friends’ present-day lives disturbs him, and Liu grapples with his own conflicts even while filming himself grappling with them. The details of the film make for an exemplary work of reporting. Liu’s clear revelation of specific yet complex events brings out psychological causality and logical connections but doesn’t impose a narrative; rather, the drama crystallizes as the events unfold. It’s a documentary in which the very nature of investigation is established—intellectually, aesthetically, and morally—by way of the personal implication of the filmmaker in the subject, of the filmmaker’s own need to make the images, to talk with the participants, to get beyond the surfaces of the settings. “Minding the Gap” is a personal documentary of the highest sort, in which the film’s necessity to the filmmaker—and its obstacles, its resistances, its emotional and moral demands on him—are part of its very existence.

When Bing returns to Rockford, Zack is in a relationship with a woman named Nina, who has just turned twenty-one, and they have a newborn son named Elliot. The conflicts in their relationship are in the fore from the start: Zack’s employment is erratic; he’s not working at the moment, and Nina is working as a waitress in a local restaurant. For the time being, Zack is a stay-at-home father, and, when Nina comes home from work, he wants a break from the domestic routine. Instead, Nina stops for a drink with friends on her way home, or, when she gets home, drops her things off and goes out again to socialize.

Their fights grow more bitter; Nina leaves their house, takes Elliot, and moves in with her aunt and uncle. But she and Zack continue to see each other, and one of Zack’s friends, in his presence, plays for Bing (who’s filming at the time) a recording of a harrowing, screaming fight in the course of which Nina threatens Zack with a knife. Nina, speaking to Bing in Zack’s absence, says that she was responding in self-defense. She says that Zack has beaten her, shows a scar that she says he caused, describes his acts of violence—and, when Bing asks how he should bring the matter up with Zack, she asks him not to do so at all, saying that it would be the end of their relationship.

Meanwhile, Keire, who has begun to hang out with another group of skaters (who are his own age), is getting his life together. From his job as a dishwasher, he has been promoted to waiter, is making more money, enjoying his work more, and looking ahead to a better future. Keire’s father has died, but his father looms as large in absence as he did in presence. Keire struggles with the paradox of victims of abuse, of loving someone who has hurt him badly. Discussing his father, Keire says that he taught him that, though he has an ethnically diverse group of friends, he has to remember that he’s black. In the company of a group of black friends, Keire tells a story that makes clear what this means: it’s about being stopped by police while driving and having an officer pull a gun on him, keeping his license and registration on his dashboard so that he’ll never have to reach into his pocket in a police officer’s presence, living in the awareness that he can be killed by the police at any given moment.

Zack is conscious of his self-destructive behavior; he admits that, rather than turning “negative experiences into positives,” he responded by being as “bad” as possible. He dropped out of school, he drank heavily, and he says that he is now well aware that his current difficulties are a result of his own early decisions. He’s also filled with a sort of nihilistic resentment, which he voices in a scene in which he mocks straight-arrow types who plan for the future and seek stable, orderly, prosperous lives.

Nina, for her part, discusses her own troubled background, a childhood without tenderness or affection, and her discovery, for the first time, at the age of twenty-one, thanks to her aunt and uncle, of what family life can and should be. Her discovery goes together with a quest for self-discovery, which she details in stark terms that themselves have a cinematic echo: “I was always something to someone, someone’s daughter, someone’s sister, someone’s significant other, someone’s mom; I never got a chance to figure myself out.” (Her remark is reminiscent of one made by the subject of Geri Ashur’s extraordinary documentary from 1971, “Janie’s Janie,” a young Newark woman and mother who separates from her abusive husband.)

As part of his confrontation with his own trauma, Liu interviews his mother, Mengyue, on camera—while having another camera operator film him interviewing her. She admits that she’d have preferred leaving the troubles in the past and not bringing them to the fore now, but that she’s doing so for Bing’s sake, in the hope of doing whatever she can, and whatever he thinks necessary, to help him. The movie’s sense of therapy through documentary is made explicit in a casual, joking remark by Keire—but it’s not a joke, it’s the very core of the film, and of the film’s wider import.

Liu looks at Rockford’s abraded surfaces, its boarded-up buildings on main streets, set against sound clips of news reports regarding the town’s economic woes and other related troubles—notably, its high rate of violent crime, fully a quarter of which, according to one of the reports, derives from incidents of domestic violence. What emerges, throughout “Minding the Gap,” is that the very notion of self-confrontation on film is more than a mode of documentary practice and aesthetic exploration. There isn’t a word of explicit politics in the film, but Liu’s confrontation with abuse and trauma as a way of confronting its unconscious legacy, of changing one’s own behavior and improving one’s own life and the lives of one’s own family and friends, is an essentially and crucially political act.

Touchstones: An Appreciation of the Dark Comedy “Heathers” |

Whyte vs Browne: Vote and join the debate on who wins...