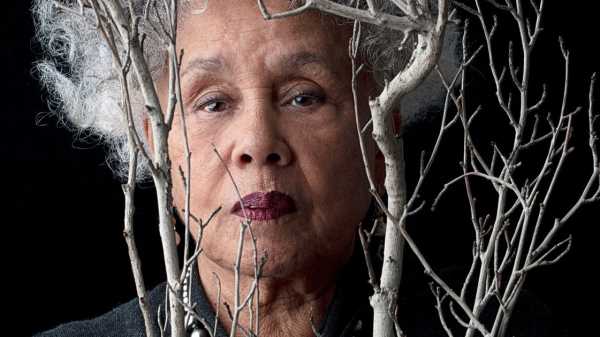 The four-hundred-and-fifty-million-dollar expansion of the Museum of Modern Art is complete. One afternoon during its opening week, a polite crowd queued on Fifty-third Street. Three tourists, hands heavy with shopping bags, fretted over whether to join it. One flagged down a MOMA employee and then thumbed in the direction of the premier temple of modernism. “What do they have in there?” the tourist asked. “Modern art,” the employee responded, and, when he was met with blank expressions, he continued, “You know, Jackson Pollock. Andy Warhol.”

And now, though astonishingly late, it’s also home to the work of the assemblage artist Betye Saar, one of the most significant philosopher-artists of the past century. Last year, the Getty Research Institute acquired Saar’s archive, for its African American Art History Initiative, deeming her “the conscience of the art world for over fifty years.” In the artist’s ninety-fourth year, two institutions on opposite coasts are hosting modest presentations of her career, which began in fervor in 1960, more or less. At LACMA, in one small gallery, there is “Betye Saar: Call and Response,” a retrospective of her last twenty-five years, while, at MOMA, “Betye Saar: The Legends of ‘Black Girl’s Window,’ ” provides an indispensable yet apprehensive showcase of the artist’s formative years, in the nineteen-sixties and seventies. People who are completely unfamiliar with Saar’s assemblage art will walk away from the little room at MOMA with a firm grasp of her lexicon: her use of windows as framing devices, her pantheon of mythological figures, her subversive prints of stereotypical icons, her symbolic amalgamations of the social and the mystical. In a glass case, one may peer at her tools: old rubber stamps, phrenological busts, and metal knickknacks, as if examining the spoils of an archaeological dig. The restricted breadth of “The Legends of ‘Black Girl’s Window’ ” provides a heady introduction to Saar.

I thought, pacing the room, of the participation of Saar in the wide-ranging exhibition “We Wanted a Revolution: Black Radical Women, 1965-85,” which was on view at the Brooklyn Museum in 2017. There, installations of Saar’s sculptural altars were placed in fruitful proximity to the art of peer black female artists like Alma Thomas, Faith Ringgold, and Howardena Pindell. The show emphasized Saar as a sort of political conjurer, endowing the everyday totems of subjugation with the vibrations of liberation. Her star rose in a manner that was exceedingly rare for black women of her time; in 1975, Saar had a solo exhibition at the Whitney. A national figure, Saar critiqued the intolerance of white feminist artists and the exclusionary male domination of the Black Arts Movement. The open dissidence of Saar has had a reverberating effect on black female artists in particular, including Saar’s daughter, the sculptor and installation artist Alison Saar, a formidable creator in her own right. 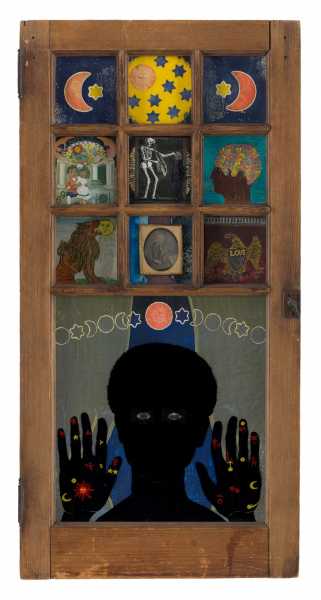 “To Catch a Unicorn.”

A certain insularity, by contrast, permeates the show at MOMA. The walls are painted eggplant, the nightshade color evoking Saar’s theme, the occult; the lack of light flowing in the room produces anxiety, a feeling of wandering in an abandoned church. On the day that I went, the room was bustling; visitors nosed up to the small panels like fish. The processional organization of forty-two works reveals the creation of a vocabulary, an increasing collection of codes and techniques. In the early sixties, in landscapes like “In the Dell” and “Lo, the Pensive Peninsula,” Saar was experimenting with drawing out the emotional potential of deserted nature through the highly tactile method of etching. Look closely and you can find the energy required to press the lines of the trees onto the surface.

Figures begin to appear behind the crush of trees. “To Catch a Unicorn,” from 1960, depicts a trotting white unicorn of lore. The virgin who tames the beast is black. In these mythological scenes, Saar delicately inserts facts of the American social situation, exhibiting a burning political consciousness. There are elements of the shadowy “Mystic Chart for an Unemployed Sorceress” that feel eternal, iterative of pan-American, Oceanic, and African folkloric art: the astrological signs, the geometric zones holding glyph-like symbols, and our sorceress, whose body is a constellation of esoteric patterns. It is the insertion of the sorceress’ social position—she is unemployed, a worker displaced by the economic system—that places this impossible being in a time and a place.

Betye Saar was raised in Pasadena, California. As a child, she had watched Simon Rodia gradually assemble the Watts Towers from detritus, and was awed. In college, administrators discouraged her and other black students from pursuing art. Instead, she studied design. She didn’t begin printmaking and assemblage until she was in her late thirties. “The Legends of ‘Black Girl’s Window’ ” may exhibit the early works of her artistic career, but they are weighted with the contemplations of a woman, who’s now a mother of three daughters, approaching middle age. I had never before seen “Les Enfants d’Obscurité,” a dark and discomfiting vision of three children contorted around each other, as if melting into one being. Evoking tarot, palmistry, and astrology, Saar privileges an overtly feminine way of processing uncertainty and disillusionment.

The centerpiece of the show is “Black Girl’s Window,” from 1969, the turning point in her career. In this window, her black-feminist philosophy, which would become the political framework of the rest of her career, finds its frame. Ten panels read like the rows of a storybook. In one half of the window, a night sky sits above panels depicting a phrenological drawing, two brown children embracing, and an imperious eagle wearing on its torso a shield inscribed with the word “love.” In the second half, out of a pocket of blue, the silhouette of a black girl presses against the window, her hands decorated with celestial symbols. She is an angel of history, anonymous and yet all of us at once, negotiating identity, trapped and defined by her ancestry.

“Black Girl’s Window” has been described as Saar’s breakthrough self-portrait. There are a few works at MoMA that succeed it; they exhibit flips of imagery that directly invoke Saar’s indelible role in the Black Arts Movement. “Let Me Entertain You,” from 1972, shows the transformation of a familiar figure: a jigging musician strokes a banjo in the first square, and his silhouette is imposed on a photo of a lynching on the second panel. In the last frame, the musician has been replaced by a Black Liberation fighter, the banjo by a rifle. But the absence of explicitly black-feminist works—in particular, “The Liberation of Aunt Jemima,” from 1972, which Angela Davis has said was responsible for the launch of the black-women’s movement—unavoidably creates a truncation where, in the artist’s life, there was propulsive evolution. Something changed when Betye Saar handed Aunt Jemima a rifle. The mammy got free. In that sense, “Black Girl’s Window” exists in Saar’s œuvre as an aperture. Look through the opening, and you will find Saar rescuing the black female figure from her destiny of abasement.

Five things we learned from this weekend’s Premier League games

Bernie Sanders has begun talking to top advisers about a possible...

How Republicans are trying to strip power from Democratic governors-elect