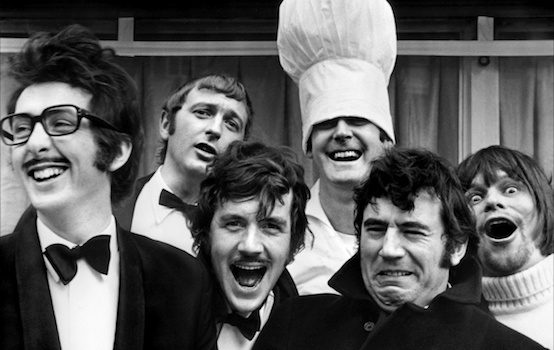 Then the PC police came for Monty Python, the famed British comedy troupe.

On June 19, the Daily Mail headlined a story: “No Joke: Head of BBC comedy says Oxbridge white blokes of Python wouldn’t get on TV now.” The article detailed the politically correct comments of Shane Allen, the BBC’s Controller of Comedy Commissioning (that title seems like a funny gag in itself), who declared that the comedic needs of today require “a diverse range of people who reflect the modern world.”

One of the old Pythoners, John Cleese, was quick to rise in defense of his mates on Twitter: “Unfair! We were remarkably diverse FOR OUR TIME. We had three grammar-school boys, one a poof, and Gilliam, though not actually black, was a Yank. And NO slave-owners.”

Such comments, of course, will not endear Cleese to his PC critics. Yet Cleese has long been on the outs with the BBC crowd: he has, for example, been an unapologetic foe of the European Union and a Brexiteer, perhaps because of his notorious Germanophobia. To be sure, Cleese is no doctrinaire conservative: in one of his most famous Python skits, he played Nigel Incubator-Jones, third-place finisher for the title of “Upper Class Twit of the Year.”

Even the fact that the Pythons often dressed as women doesn’t help. As Cleese put it, “We were never ashamed to reveal the more feminine side of our personalities,” adding, “to demonstrate solidarity with all suffragettes, 91.6% of the people we ridiculed were male (in the old-fashioned sense, that is).”

Cleese also recalled the genesis of the show back in 1969: “When Python started, the Head of Light Entertainment loathed it, and at a Heads of Department meeting, six of them disliked it.” Thus, Cleese added, speaking of his current BBC detractor, “Allen is just the latest in a long line who don’t really know what they’re doing.”

Without a doubt, the quippy Cleese is well-equipped to quash Allen in any humor faceoff, and yet the unfunny fact is that the PC-ers at the BBC are getting the last laugh. As Cleese ruefully observed, the BBC owns the rights to the show, and yet it hasn’t chosen to air it in nearly two decades.

Indeed, across the realm of popular culture, humor is being stripped of its humor. For instance, the showrunner of The Simpsons has indicated, in response to PC pressure, that one of its characters, the Indian American Apu, is soon to be retired.

And speaking of comedy, there’s the case of Roseanne Barr who has just learned the hard way that the PC forces speak loudly and carry a big stick. As we know, last month her comedy career was kiboshed over a single bad tweet—for which she soon apologized. Many will feel no sympathy for her, and yet it’s hard not to notice that other comedians, on the correct side of the PC line, have done and said far worse and still have going careers. For instance, Kathy Griffin routinely affronts Donald Trump, his wife, and the rest of his family in the most brutal fashion—and yet the PC culture trollers regard her as a hero. Indeed, so long as Griffin builds her routines on Trump-bashing—plus, of course, Republican-bashing—she will have a fine career.

So the rest of us might conclude that, in all of these social media brouhahas, it would be easier to think that cultural justice was actually being meted out if justice operated according to a uniform standard.

Instead, what we’re seeing in the culture wars is systematic injustice, aka political correctness. To put it simply, PC is the exercise of power by one side to clobber the other side. PC is sometimes called “Cultural Marxism,” but that’s unfair. Why? Because Cultural Marxism, wrongheaded as it might be, is a critique of society associated with real intellectuals, such as Theodor Adorno. By contrast, PC is just censorship—oftentimes thuggish censorship.

So what’s going on? And why is comedy so particularly at risk from a PC crackdown? (That last question was brought to mind recently, for instance, by a June 21 item from The Onion in which the site announced that it would be “embracing diversity” by adding a Prophet Mohammed emoji.)

One answer comes from Greg Piccionelli, a Los Angeles-based First Amendment lawyer and inventor: “What we’re seeing here, in the battle over PC, is a battle between an exaggerated, mutated, left brain and the right brain—of individuals and, indeed, of society itself.”

We might pause to observe that many scientists—the most notable being 1981 Nobel laureate Roger W. Sperry—have believed that the two lobes of the human brain, left and right, are responsible for different brain functions: the left brain deals with words, facts, and sequences, while the right brain deals with visuals, emotions, and intuitions. The theory further holds that for most people, one lobe or another is stronger, and that everyone sits somewhere on a spectrum, from those who are strongly words-and-facts-driven to those who are strongly visuals-and-emotions-driven.

The point is not that one side is better or worse, but rather—to declare the obvious—that the joining of both is what defines us as human beings.

It should be noted, too, that the theory of left brain/right brain dichotomy is controversial, far from universally accepted. And yet even so, the theory is broadly popular because at minimum it offers a perspective as to why people are the way they are—from those who are Mr. Spock-like in their cold taciturnity to those who are Captain Kirk-like in their hot-blooded intensity.

Continues Piccionelli: “Political Correctness is runaway left-brainism. In its binary categoricalness, it seeks to reduce the yeasty complexity of human nature to a simple category, good or bad.” Indeed, we might add, the rote reductionism of today’s PC was brilliantly anticipated in George Orwell’s Nineteen Eighty-Four, in which all whimsy and japery was to be stamped out by the imposition of Newspeak. Thus obedient true believers were taught, for example, to boil their thinking down to the simplest possible dualities, e.g. “goodthink” versus “crimethink.”

Piccionelli doesn’t in any way dispute that psychology is based on medical and biological truths. But he is saying that the field has been overrun by sectarians, charlatans, and, well, crackpots: “There are something like 300 schools of thought in psychology, from Freudianism to Jungianism to Structuralism to yadda yadda. And now, of course, PC has created a kind of politicized psychology.”

Such a vast variety of thinking isn’t the stuff of science because science is, by definition, rigorous: “By contrast, too much of psychology falls within the realm of personal belief—more like, say, religion.”

Within the rigid zone of PC psychology, therefore, it’s easy for “snowflakes” to work themselves into a full-fledged victimology. And yet paradoxically, each concocted violation—each decried “micro-aggression” or “cultural appropriation”—is really just an exercise of force: one opinion seeking to crush another opinion.

It’s almost unnecessary to add that PC, bristling with psychological pseudo-science, is also humorless. Scientists, after all, are not known as jokesters, and neither, evidently, are pseudo-scientists.

We can quickly see that in the face of such iron dogmatism, poor old Monty Python doesn’t have a chance. If its existence depends on the sufferance of a thoroughly PC-ized British public sector, then of course it must go down the memory hole.

Ironically, in its relentless attempt to expunge human nature from humans, PC is ridiculous and thus ultimately kind of funny. As Voltaire once said, “Doubt is not a pleasant condition, but certainty is an absurd one.”

Looking ahead to a Big Brother-ized future, we might ask: if Python melts away under an Orwellian hail of two minutes’ hate, then what about other non-diverse ensembles? What about, for example, the Beatles? Four white men? They weren’t diverse. Or the Rolling Stones—they’re still around, and still not diverse. How much longer can they last?

Yet of course, it’s a bigger world than just the BBC and PC. So we can see where the right-wing—Piccionelli would call it right-brain—backlash can come from.

In fact, it’s already here, in the form of Donald Trump, who’s about as anti-PC as one can imagine. If nothing else, Trump appeals to those who feel assaulted by the PC police.

And so an even greater battle, PC versus anti-PC, is coming. But you already knew that.

James P. Pinkerton is an author and contributing editor at TAC. He served as a White House policy aide to both Presidents Ronald Reagan and George H.W. Bush.