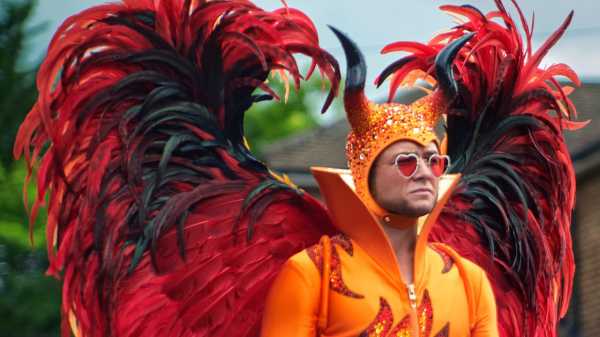 The pop-music bio-pics keep coming because they fulfill several basic needs, for viewers and for musicians. For viewers, the musical bio-pic offers an inside view of celebrity, involving the magic of supreme talent, the business practicalities that go into its realization, and the crafting and sustenance of a public persona apart from the artist’s private self. For artists (or their estates), bio-pics are a crucial marketing tool; they provide the ability to both produce and control their legacies and public images—and, for that matter, to propel themselves back into the forefront of mass media. At a time when record sales no longer exist, the bio-pic takes the place of the “greatest hits” album while also serving as its ad campaign. That’s why it’s no surprise that these movies are hardly ever any good. Nonetheless, the latest one, “Rocketman,” about the life of Elton John, delivers a primal gratification or two regarding the mystery and majesty of artistic creation and popular success, and their associated risks.

As directed by Dexter Fletcher and written by Lee Hall, “Rocketman” views Elton John’s life from the perspective of rehab, which he entered in 1990. (In the film, it happens in 1983.) As Elton (Taron Egerton), attending group therapy in an orange feathered and goat-horned stage costume, admits to his addictions (which he lists in a protracted and comedic litany that includes drugs, alcohol, sex, and shopping), he’s revisited by his childhood self, and the apparition launches the tale of his musical genesis. It does so with a musical-fantasy routine, the first of several production numbers that decorate the film with a charmless functionality, serving as the equivalent of music videos while John’s former hits play out on the soundtrack. The martial choreography and the Steadicam pursuits do little for, or to, the songs, but Egerton, who gamely if only efficiently does his own singing throughout, is no Channing Tatum. He’s more striking when his moves are threaded among the backup dancers than when he strides out in front of them.

“Rocketman” tells the story of a misunderstood child who never overcomes his emotionally chilly upbringing. Born Reginald Dwight, the young John displays a precocious sunburst of musical talent at the family piano. But his father, Stanley (Steven Mackintosh), a jazz aficionado, is harsh and remote, and his mother, Sheila (Bryce Dallas Howard), absorbed in life’s daily struggles and lacking any emotional satisfactions of her own, is indifferent to her child’s exceptional talents. Fortunately, his grandmother, Ivy (Gemma Jones), is in the household, and, fulfilling the humorist Sam Levenson’s riff about grandparents and grandchildren being united by their common enemy, she does her best to foster Reggie’s talent, making sure that he benefits from a scholarship to music school and impressing upon him the importance of taking advantage of the few opportunities that life provides.

“Rocketman” dutifully works its way through the breakup of Reggie’s parents’ marriage, his mother’s remarriage to a man named Fred (Tom Bennett), who has a rock-and-roll bent, and his abandonment of classical-piano studies to work in a bar band. There he makes his first contact with American—and black—musicians, one of whom gives him what’s presented as his first kiss from a man. He also delivers a crucial line that sets the tone for the rest of the film: “You’ve got to kill the person you were born to be in order to become the person you want to be.” It’s only there that, despite Fletcher’s sodden direction, the movie catches dramatic energy. Reggie drops into the office of a small record label and, taking the first name of Elton from a bandmate and the last name of John from Lennon, promotes himself as a songwriter.

The aspiring Elton John’s scenes with an enthusiastic young employee named Ray Williams (Charlie Rowe) and the label’s gruff, brassy, and brutally frank boss, Dick James (Stephen Graham), enliven the film with the tantalizing rise of a public identity. We see hard-nosed and unsentimental business sense at work behind the birth of a star, and—as a result—Elton’s increasing alienation from the public persona that he creates, even as the spark of his musical ability becomes a raging fire. The producers slip him an envelope of lyrics that came in from a young writer named Bernie Taupin (played by Jamie Bell), and, just as Taupin’s lyrics provided the crucial springboard for John’s songwriting and performance, they provide the movie with its best moment, the one that defines it and the musical-bio-pic genre together: sitting down to the piano at his family’s house, Elton puts the lyrics to Taupin’s “Your Song” above the keyboard and, in a few seconds, picks out the tune to which he sets them. This depiction of spontaneous creation may be a cliché, but it’s one that’s rooted in Elton John’s real experience; it’s an exaggeration, but only a slight one—in 2013, Elton John told Cameron Crowe that he actually wrote the song in “about twenty minutes.”

Creation is both a black box and a miracle, suggesting transcendence and ecstasy, possession and abandon—even if the physical action that it involves is comparatively plain and simple. The magic moment when the light bulb goes on over the artist’s head, when the thing for which the artist is celebrated happens, is irresistible even when it isn’t scripted or filmed well. This is true not only in the realm of art but in all sorts of endeavors; it can also be mathematics (“Hidden Figures”), the food industry (“The Founder”), investment banking (“The Big Short”), or police work (“BlacKkKlansman”). (And, of course, it isn’t necessarily even a true story—see any iteration of “A Star Is Born.”) But it’s with music that the idea itself provides immediate pleasure—and it’s in the life of the inspired performer that the public life threatens to take over the private one.

“Rocketman” depicts that pathos yet blandly flattens it. Elton complains, in one of his disputes with Bernie, that he himself, the front man, is the one who can’t walk undisturbed in the street. He struggles (briefly and inconsequentially) with the need to maintain a strong and cheerful public face despite his private sadness and anger. Elton’s offstage tragedy involves the enduring wounds from his early family life, his frustrated quest for love, and his inability, as both a gay man and a public figure, to live his romantic life openly. He suffers bitter disappointment at the failure of his relationship with John Reid (Richard Madden), his manager and romantic partner, who, early in Elton’s years of stardom, warns him that revelations of his homosexuality would destroy his career and advises him to create a faux public relationship with a woman.

Yet “Rocketman” is far from a drama of introspection—and, unfortunately, Edgerton’s performance, as directed by Fletcher, doesn’t add to the protagonist’s inner life. Fletcher (who also stepped in to complete “Bohemian Rhapsody” after its original director, Bryan Singer, was fired) doesn’t at all achieve with Egerton anything comparable to the performance of Rami Malek in the Freddie Mercury bio-pic. “Bohemian Rhapsody,” a mediocre movie, is lifted above its mediocrity solely by Malek’s performance, which conveys clearly and powerfully that Freddie (the character) perceives himself as a sort of freak or monster and has to overcome that dire self-image through his life as a famous artist. There’s nothing comparable in Egerton’s performance, which, though energetic and sympathetic, merely asserts Elton’s frustrations and goes through the paces of the singer’s life.

“Bohemian Rhapsody” has been derided for downplaying Mercury’s homosexuality; “Rocketman” does the same with Elton’s sexuality, albeit in a different way. The new movie has a brief sex scene of little eroticism, which might as well have been a title card saying “They had sex.” Watching a scene in which Elton flaunts his sexual success to his mother (“I’ve fucked everything that moves!”) viewers are likely to wonder, Where? When?, because nothing in the film indicates that Elton has in fact done so. (Perhaps it’s the point of a ridiculous fantasy number set in a night club, in which he dances amid a group of bare-chested and leather-clad men.)

The overriding emotion evoked by “Rocketman,” as by “Bohemian Rhapsody,” is the nostalgia for a mainstream, for a time before the Internet and a thousand channels and seemingly infinite access to a seemingly infinite variety of music and culture at large. That lost mainstream is spotlighted in passing when Elton learns, at a particular moment in the nineteen-seventies, that his albums account for five per cent of all records sold worldwide. At the same time, the movie indicates—though passingly, as in John Reid’s warning to Elton about keeping his sex life a secret—that the mainstream of the era was grossly discriminatory, and was a fabrication rooted in who and what it excluded. But whatever tension this duplicity and sense of exclusion caused Elton is unexplored in the movie’s drama. Elton John’s songs, for all their melodic charm, were edgeless vectors of instant nostalgia even at the time of their release. The edge was in the public persona, in the costumes and the manner, in the coded gayness. “Rocketman” hints as much only once, in a scene showing Elton’s mother watching Liberace on television. “Behind the Candelabra,” Steven Soderbergh’s extraordinary bio-pic of Liberace, is a useful comparison. Soderbergh doesn’t make a case for Liberace’s music; he makes a case for Liberace’s persona as the enduring and crucial work of art. “Rocketman,” by contrast, sacrifices the depth of Elton’s character to make a feature-length commercial for the real-life back catalogue.

What to Stream This Weekend: Five Films That Were Runners-Up for...