Home Culture My Family Celebrates All the Holidays | 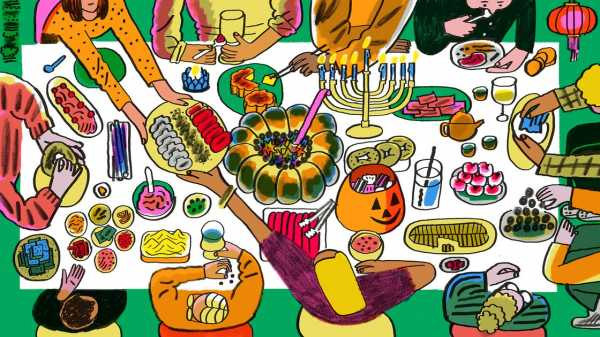 A few years ago, while I was updating our family’s Google calendar—or worrying about not having updated it, which to me is more or less an identical state of mind—I realized that, during the school year, September through June, we celebrate a holiday roughly once every two weeks.

I don’t know why it took me so long to notice. When it comes to holidays, my family stands at the center of a complex Venn diagram, like the recent meme aggregating preachers, bank robbers, d.j.s, and parents removing a child’s sweater (“Put your hands up”; “I’m not going to ask you again”; “Everyone on the floor”). My mother-in-law was born in India and emigrated to New York, in 1964, where she married my father-in-law, a Jewish man from the Bronx. Many years later, they divorced, and my father-in-law married a woman from Beijing. I was raised a Unitarian in Episcopal schools, and I’ve practiced Zen Buddhism for twenty-five years.

To recap, using this fall as a sample:

September 24th: Mid-Autumn Festival. A Chinese holiday I began celebrating twenty years ago when I lived in Hong Kong. Mooncakes, oolong tea, sitting on the balcony with lanterns, and looking at the moon.

October 1st: Simchat Torah. We don’t normally celebrate this holiday—the marking of the end of the yearly cycle of reading the Torah—but, because our daughter’s bat mitzvah is coming up next summer, we joined in the festivities. No food, though drinking is encouraged.

December 2nd through 10th: Hanukkah. A party for which I fry many latkes in advance, always burning myself with splattering oil, followed by eight nights of distributing presents.

December 8th: Buddha’s Enlightenment Day. Traditionally celebrated by meditating overnight to celebrate the Buddha’s sighting of the morning star. In our case, a simple ceremony with flower offerings, followed by tea and cake.

It’s a lot. Some of these holidays are more of a commitment than others, and some we don’t celebrate every year; a few, like the Jewish High Holidays, are structured around formal rituals, but most are haphazard. We’re a two-career family, without time for elaborate home decorating or even, in some cases, proper vacuuming. And, because our kids are public-school students in New York City, the calendar makes it relatively easy: the city recognizes all major Jewish holidays and also the Lunar New Year, which we celebrate with my stepmother-in-law. But the choice to aggregate holidays as we do represents something more than that. Plural families like ours are a microcosm of what the anthropologist Benedict Anderson famously called “imagined communities”; we have no model in the world as it currently exists, so we make up our own.

It helps that so much food is involved. Food is the untranslatable meaning of any cultural or religious ritual; obviously this is true of the wafer and the wine in Christian communion, but it’s just as true of latkes, mooncakes, mithai, or the heart of a buffalo, which a Lakota friend of mine recently ate as part of a revival of a traditional practice in Pine Ridge. Once, on a silent ten-day meditation retreat in Thailand, I was handed something to eat that looked like a raw head of garlic. I couldn’t refuse, so I nibbled it gingerly: it was a mangosteen, the most delicious of all tropical fruits. You don’t get metaphors much more self-evident than that.

But who gets to make the food and offer it? Who is the guest, and who is the host? As a white man of Protestant descent, whose ancestors were settlers and colonizers, this is a question that I have to consider. My status as a Jewish-adjacent person—a “stranger in the camp,” to use a term from Deuteronomy—is, in many people’s minds, deeply weird, or even unacceptable, either because I’m appropriating a tradition that’s not my own or because the existence of my family is a violation of Jewish law. I have chosen not to convert. I have my own adopted religious tradition to keep and teach. But at times—especially when my wife and I were first married—I’ve displayed all the annoying enthusiasm of a convert, especially in all matters related to food. My wife’s grandmother found this hilarious; when I was quizzing her about her chicken soup recipe, which I’d faithfully tried to replicate, even buying flanken (thin-cut beef short ribs) from her own butcher. “The trouble is, Jess,” she said, over the phone, “you aren’t Jewish.”

I later discovered the secret that she was keeping from me—onion skins!—but I’m still not Jewish. The Hebrew Bible describes a world almost as plural as ours is today, a world in which the Hebrews were surrounded by others—servants, slaves, concubines, wives, relatives, traders—who sometimes partook of their rituals, by choice or by force, and who sometimes included Hebrews in their observances as well. Even without the occasional intervention of angry prophets calling down God’s wrath, balancing these obligations must have been a challenging situation at the best of times, without refrigeration to keep the leftovers from all the sacrifices, and without Google to get all the dates right.

When I was a child, there was really only one holiday that mattered. The year oriented itself around Christmas, and, because I went to an Episcopal school in Washington, on the grounds of the National Cathedral, this meant a first-class pageant, filled with hundreds of tiny piping sopranos singing “Hark, the Herald Angels Sing” amid the smells of balsam and wax and dusty velvet seat cushions. Which all feels odd now, because Christmas is the one holiday my own family almost never recognizes in a significant way. My brother and sister-in-law live on the West Coast, and my mother spends Christmas with them.

As a former sort-of Christian, I’m told that I’m allowed to grieve the loss of Christmas, like Charlotte does in “Sex and the City.” My wife buys me a wreath from the Quebecois Christmas-tree saleswoman who sets up in a plywood shack across Bleecker Street from us every December. I crave the smell of Douglas fir in the house, but that’s about it. My dissatisfaction with Christmas is part of what made me a Buddhist, as I wrote in an essay some years ago: the overflow of abundance on a single day, a festival of craving that can never be fully satisfied, nearly eclipsed by the grim rituals of Black Friday and December 26th, that great nauseous wave of buying and returning, borrowing and spending, which is horrible enough to make anyone wonder if the Puritans—who despised Christmas, and managed to keep it unrecognized in Massachusetts until 1856—had the right idea after all. Saturnalia, the pagan ur-Christmas, with its days of feasting, in which masters had to wait on their servants, would be a great replacement, in my opinion.

The kind of Buddhism that I practice, Korean Zen, is extremely adaptive, synthesizing different streams of Buddhist thought that, in other countries, prompted sectarianism and religious wars. The monk who founded my school, Zen master Seung Sahn, practiced a go-anywhere, do-anything ethic that included hanging out with pickpockets and playing slot machines in Vegas. He believed it was possible to teach Zen while discarding virtually every element of his own training—the language, the temples, and the centuries-old, male-dominated monastic order. I’ve inherited some of his optimism, along with the skepticism that has led younger American Zen teachers to interrogate the overwhelming whiteness of American Zen centers and argue that “enlightenment is a male fantasy,” while all the time still believing in the tradition itself.

Most people don’t want to live a religious life that is a series of paradoxes, which may explain why a growing number of Americans declare themselves to be nonreligious, marking no holidays other than secular ones. If you come from a family with very few rituals, as I do, it’s hard to start making time for them without feeling that the cast of “Seinfeld” is watching over your shoulder, ready to erect a Festivus pole at any moment. My wife has never had this problem. She was raised in a secular Jewish family—no Hebrew school, no bat mitzvah, but much celebration of the holidays, especially Passover, which involved hours of arguing, competing Haggadahs, and a strangely poetic ritual wherein her grandmother, when the conversation got too loud and agitated, would turn around and talk to the wall.

Whether private or public, religious or not, the repetition of rituals is a way of marking time, of looking forward and backward at once. This is why I enjoy the rituals, but also why, in an American context, they often feel counterintuitive, a “waste of time.” “We know what to do with space but do not know what to do about time,” the rabbi and civil-rights pioneer Abraham Joshua Heschel wrote in “The Sabbath,” in 1951. “Most of us seem to labor for the sake of things of space. As a result we suffer from a deeply rooted dread of time and stand aghast when compelled to look into its face.” Judaism, Heschel wrote, is an “architecture of time,” which works both in microcosm—the precisely determined minute, different every week, when Sabbath candles are lit—and in macrocosm, celebrating not only a very full year of major and minor festivals but also multi-year increments, most famously the forty-nine-year Jubilee, one of the inspirations for Occupy Wall Street, when all debts are forgiven, and all slaves and prisoners are freed.

I’m fascinated by the idea of an architecture of time, but I’m also haunted by it. Not only because the building Heschel describes isn’t one that I’m prepared to enter but also because it’s difficult to believe that there is a single framework left that explains the future—or that will last, meaningfully, even in half a century, particularly if you take climate-change seriously. I sense this when I see my otherwise-secular friends talking and writing about their horoscopes in great detail: patterns matter, and time matters, but maybe not in the way that we were taught. This, too, drives my own interest in holidays and rituals, though I’m reluctant to say so aloud. I don’t know how many of these observances will last, and I want to preserve them, with my kids, so that the memory of them persists when the atmosphere is too flammable for candles and Gummi Bears are no longer suitable for human consumption. It’s a way, for me, of looking time in the face, of making life as meaningful as it can be in the present. Which is the only time we have.

The Private Side of Jazz Music, Through the Eyes of a...