Home Culture My Life in Smoke | My maternal grandparents kept a pewter-lidded urn on their coffee table which widened from its base, like hands spread in offering. On top was an inlaid white-stone knob for lifting. The interior was filled with neatly lined single cigarettes. A large Chinese bowl in their library was heaped with packs of L&M cigarettes. The packs were red and white, wrapped in cellophane. At dinner, beside lit candles in tall silver holders, sat little crystal cups sprouting cigarettes, like pencils in a jar. I would like to say that their home is why I started smoking, although it is not.

My grandfather told me that cigarettes cost a nickel a pack when he was a boy. When I started buying them (from machines rather than over the counter, because I was underage), they cost thirty-five cents. A quarter and a dime inserted in the slot, followed by the satisfying plop of the pack in the bottom tray.

As a teen-ager, I practiced French inhaling and blowing smoke rings in front of the bathroom mirror. I had a knack.

My mother—who quit smoking the day the Surgeon General issued the first warning—had been offered her first cigarette in an elegant restaurant by her father. A rite of passage. By the time I was grown, she disapproved of smoking. She told me that a single ember could hide in a couch cushion and ignite hours later, when the family was asleep. I often ran cigarette butts under the faucet.

In the early seventies, when I was still in high school, I became pregnant, much to my family’s chagrin. In the hospital for my son’s birth, my roommate and I smoked up a storm. We both had ashtrays on our bedside tables. The nurses emptied them frequently, like dutiful barmaids. My roommate felt superior to me because she was in her thirties, while I was still a teen-ager. She already had experience as a mother—to boys, although she proclaimed herself happy to finally have a girl, and to not have to see only “boy parts.” She would dance her naked girl infant around the bed, a cigarette dangling from her mouth. She told me that she knew her current husband was better than most men, because when they were dating he easily could have raped her and didn’t. I didn’t tell her that I found her standards rather low. Nor did I tell her that she could think what she wanted, because I had not actually started my real life yet; I was paused between lives, like one long cigarette break.

I was told that my maternal grandfather had a heart attack upon hearing the news of my pregnancy. He had a stroke, went into a coma, and later died. I’m sure I was part of the reason and have always felt the burden of guilt, but his three-pack-a-day habit since childhood probably also contributed.

During my first marriage, at night, if I ran out of cigarettes—my husband at work, my baby asleep in the crib—I would scour the ashtrays for butts long enough to light. If I ran out of matches, I would light the frayed butt on an electric coil of the stove, tiny strands of ash catching fire and floating up.

I liked the feel of smacking a new pack against the palm of my hand, compacting the tobacco, like a pro, along with the anticipation of pulling back the tiny red tab and unwinding the red line.

Once, when my son was probably about four, we were hurrying down Route 91, my son and I. As usual, he stood sentry between the bucket seats, watching the road ahead. Finished with my cigarette, I crammed it into the crowded ashtray. Instead of being extinguished, it ignited the other butts, creating a little inferno, flames licking the radio. Amid speeding trucks, we pulled over to the berm and dumped out the fireball. Part of the melted dashboard was permanently disfigured.

After my first divorce, I visited a friend in New York City who took me to the Rainbow Room. Waiters rushing to light my cigarettes seemed the height of sophistication.

I started with Marlboro Reds, then Parliaments (the ones with hard little tube filters attached), then back to Marlboros. Winstons in a pinch. Never menthol. I ended with Merits in the yellow-and-white packs. In between, I took a detour into Virginia Slims, the feminist cigarette. “You’ve come a long way, baby.” Julius: The Story of a Premature Birth Who Stays Gone, and Who Can Afford to Return 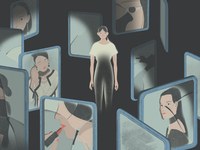 A Novelist’s Stint Impersonating the Ultra-Rich in China 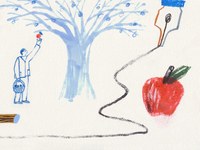 My Father’s Things, and My Own 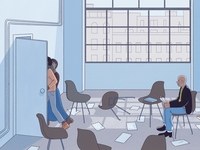 The Strange Story of a Secret Literary Fellowship

By Daniel A. Gross My Mother and the Failed Experiment of Yugoslavia

In graduate school, everyone smoked in the creative-writing workshops. Pity the person with asthma who wanted to be a writer.

I remember considering it unreasonable to have to wait for takeoff in a plane before one could light up. I loved that one could smoke in movie theatres in London.

When I started teaching at a private college, everyone smoked in the classroom. People used the ashtrays on the seminar tables, but in the hallways—despite some standing ashtrays—the gray industrial carpeting was speckled with black holes where people had ground out their cigarettes with their shoes.

I knew it was time to quit smoking when I could not get through a bath or a shower without a cigarette. Smoking in the tub is about as pleasurable as reading in the tub. Compare stippling the pages with water spots, unable to put your arms down, with balancing an ashtray on the rim of the tub, unable to put one arm down.

I began smoking again after my second divorce. I met my third husband while I was smoking a thin brown Tiparillo. Though he never smoked, he said he found the act intriguing. I was thirty-seven. No one in his family smoked, though his mother had smoked briefly during her pregnancy with him, her doctor recommending it to calm her nerves. When he and I moved into a newly renovated house together, he banned smoking inside. He might have saved my life. It was so unpleasant to smoke by myself on the porch on windy Chicago nights that I eventually quit for good. The act became too socially unacceptable to ever re-start.

On a recent trip to Scotland, I saw that their packs of cigarettes have gruesome photographs of physical defects or diseases caused by smoking—mouth cancer, throat cancer, even impotence (a photo of a male crotch with the penis burned out). They aim to eliminate smoking nationwide by 2034; they might have a chance, because unlike the U.S. they have no real remaining tobacco industry.

My grandmother had emphysema when she died. Several of my older friends who continued smoking after forty have lung cancer or have died from it. My grandparents’ pewter container sits on my coffee table now, full of tightly wrapped cough drops, waxy paper twists at both ends. I sometimes study the carved white-stone knob. The image is chipped and worn, but I think it might have been an owl, a symbol of both wisdom and warning.

Rouhani Says Iran Will Only Negotiate With US if Washington Returns...