Home Culture “Neo Yokio: Pink Christmas” Is the Most Eccentric TV Special of the... 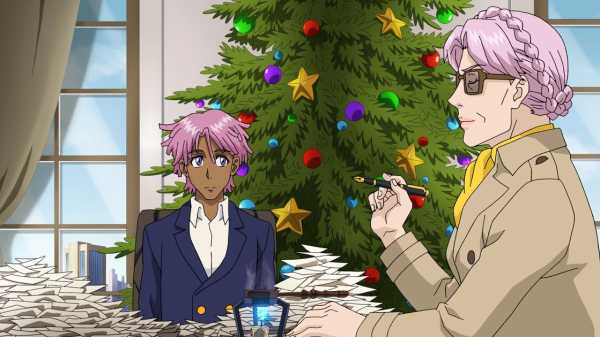 “Neo Yokio: Pink Christmas” (Netflix) is an animated bauble with a weird sense of cheer. The hour-long show imagines our hero, a playboy exorcist, tangling with a demonically possessed Rockefeller Center Christmas tree and thereafter unwinding with a cup of hot chocolate at Serendipity 3. Its adventures return us to the extremely specific pleasures of “Neo Yokio,” a larkish 2017 series which deployed the tropes of battle anime to advance a droll tale of rich-kid disillusionment; “Pink Christmas” is surely the most eccentric TV special of the festive season.

The protagonist Kaz Kaan (Jaden Smith) loiters in his melancholy like a tubercular poet. He’s the town’s “No. 1 bachelor and demon slayer”—a descendant of the “Magistocrats,” who began defending Neo Yokio against otherworldly invasion in the eighteenth century. Kaz wears a mop of pink hair on his head, a double column of gleaming buttons on his blazer, and the cuffs of his chinos turned up just so. He lives on Central Park West, in the San Remo, or something like it. The setting is an alternate-universe New York, with the city remodelled along the lines of a futuristic fairy-tale daydream. In terms of both its visual scheme and its social scene, it is a caricature of Manhattan drafted with a passion for Romantic grandeur and a nostalgia for preppy totems. There’s a touch of charm even in its dystopian details: a “ranking of bachelors” hovers above midtown, on a Beaux-Arts column, with the names of eligible toffs listed on a split-flap display recalling railway-station timetables. (The creator of “Neo Yokio” is Ezra Koenig, most famous as the front man of the band Vampire Weekend; these wry gestures, like the show’s plotlines about society balls and field-hockey matches, comport with the Ivy League flavor sometimes discernible in his lyrics.)

Kaz is attended by a robot butler (Jude Law) and annoyed by his aunt Agatha (Susan Sarandon), who arranges his anti-demonic gigs. Kaz needs to work for a living, unlike his arch-nemesis Archangelo (Jason Schwartzman), who is always accompanied by a retinue of courtiers in pastel shorts. In the first episode, Kaz comes to the rescue of the fashion blogger Helena St. Tessero (Tavi Gevinson), commanding, “Demon, be gone from this Chanel suit!” Subsequently, Helena suffers an existential crisis. “Something’s changed in me since the exorcism,” she says. “I’m done searching for meaning in the aesthetic cycles of commodities.”

Picking up that thread of jadedness, “Pink Christmas” presents a satire of personal brands, consumer imperatives, and community standards in “the most problematic city in the world.” The December grind of scrambling for status finds Aunt Agatha sealing her Christmas cards with furious intensity, for they are destined to earn her two weeks of visibility on the refrigerators of the local élite. “You couldn’t buy that level of penetration,” she says. Hustling from another rung on the social ladder, Kaz’s chums Lexy (the Kid Mero) and Gottlieb (Desus Nice) implore him to wear gear from their new clothing brand to an appearance at a televised secret-Santa ceremony. “You can’t buy that level of penetration,” they repeat, as if the phrase is a lyric jingling with the spirit of the season.

The central plot finds villainous Archangelo fomenting a retail boycott and proposing a return to the true meaning of Christmas. In truth, he is co-opting anti-consumerism for purposes related to the betterment of his podcast—but his actions lead to the Christmas Eve firing of a Bergdorf Goodman sales clerk, who then becomes a vessel for supernatural agents of mayhem. One joke imagines a collaboration between the fashion label Vetements and Mount Sinai Hospital to design a two-thousand-dollar hospital gown. With its loose riffs on common vanities and fancy indulgences, “Neo Yokio” spoofs a society that is well beyond parody. It is waiting to be discovered as either an amusing cult object or a bemusing case study in the self-protective ironies of our day.

F-16 Downing: Israel’s Use of Force in Syria Has Proven Ineffective...