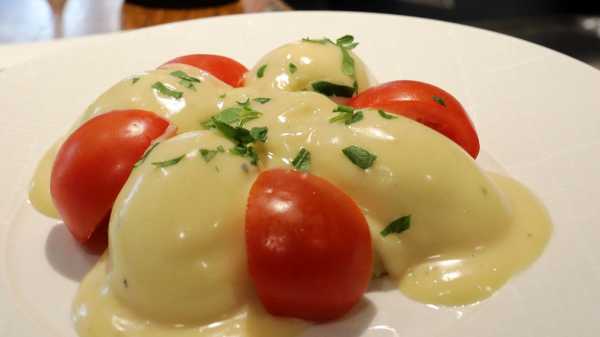 One thing I can humbly claim to have in common with the late, great food writer Jonathan Gold is an aversion to, of all things, eggs. “I have had eggs that I imagine were probably the best eggs that anybody in the world were eating at that particular moment and they were still eggs,” Gold told a reporter earlier this year, after removing an offending ovoid from atop his fried rice. Eggs are unavoidable; I eat them all the time. But prepared at their most simple—especially poached, soft-boiled, sunny-side up or down—they tend to strike me as somehow unfinished, not quite meant for consumption. Their texture is almost always displeasing (soft, gelatinous, gooey), their flavor defined by an anodyne, embryonic blandness.

And so, in theory, the French dish known as oeuf mayonnaise, a staple of Parisian bistros, should be my worst nightmare. It’s made with nothing but hard-boiled eggs and mayonnaise, which, as any mayo hater can tell you, is just raw egg yolk emulsified with oil. I can’t imagine what possessed me to order the dish for the first time, at a since-shuttered restaurant called Thirstbaràvin; it must have been the fact that everything else on the Parisian-style menu was wonderful. The single oeuf arrived hard-boiled to perfection, so that the yolk was fully cooked but ever so slightly jammy, and the white was supple but not rubbery. It was sliced in half lengthwise, placed face down on a plate, draped in a thick, custardy coat of house-made mayonnaise that hugged its curves, and finished with a sprinkle of snipped chives. It was unassumingly elegant and absolutely delicious, somehow transcending the sum of its eggy parts, especially when eaten with a basket of crusty brown country bread, a dish of vinegary lentils laced with lardons, and a glass of crisp rosé.

Unlike certain other bistro classics—steak tartare, onion soup—oeuf mayonnaise has never been a crossover star. “I think I’m the only American who likes that dish,” the chef and Paris expat David Lebovitz told me recently. For a while, it seemed like an endangered species even in France. In 1990, a French food critic named Claude Lebey—known for his eponymous series of restaurant guides, including one that focussed on Parisian bistros in particular—started an organization called the Association de sauvegarde de l’oeuf mayonnaise (A.S.O.M.), or the Association to Safeguard Egg Mayonnaise. Each year, Lebey and his co-founder, the French journalist Jacques Pessis, bestowed awards upon bistros that they determined were properly upholding the tradition of oeuf mayo. (They also, Pessis told me, came up with a mascot: the fictional inventor of the dish, one John D’Oeuf.) In a 2009 interview with Le Figaro, Lebey explained that, “by the end of the 1980s, the bistros were losing their wings,” and that oeuf mayo, an “emblematic recipe,” had begun to seem vulnerable, especially as the egg became vilified as a bearer of bad cholesterol. But the dish, he said, “is as indispensable to the kitchen as the paperclip to office work.”

Lebey retired in 2013, and so, too, did the A.S.O.M. In 2017, he died, at the age of ninety-three. But this year his grandson, a lawyer named Vincent Brenot, revived the organization along with a few friends. “Do you know Asterix and Obelix, the French drawings?” Brenot asked me by phone from Bali, where he was on vacation. “I believe the fat one says that he fell in the magic potion when he was a baby. In my family, we all fall in mayonnaise when we are babies.” Brenot and his friends made a Facebook page, tote bags, and membership cards and arranged the very first “Oeuf Mayo World Championship,” this past June. The only problem was that all of the competitors were French. For the second annual championship, Brenot hopes to recruit some international applicants.

In New York, at least, I have searched in vain for an oeuf mayonnaise as good as my first one. At Nix, near Union Square, what’s on the menu as “egg salad” is more like oeuf mayo, but the eggs are blanketed in habanero cream instead of mayonnaise. At La Mercerie, in SoHo, the dish looks more like oeufs mimosa, or devilled eggs, with the cavity of each egg half filled with mayonnaise and sprinkled with grated yolk. At Joseph Leonard, in the West Village, the halves are intact but served yolk-side up, each topped with a dollop of mayonnaise and a sliver of ham.

In a proper oeuf mayonnaise, Brenot told me, the mayo should cover the whole egg. This is, for me, a vital part of the appeal—you can almost forget that you’re eating an egg, or mayo, which you rarely see elegantly blanketed instead of scooped or spread. Lebovitz compared oeuf mayo to another French dish: duck confit, in which a duck leg is both cured and cooked in its own fat, which “reinforces its flavor.” In oeuf mayo, the hard-boiled egg is similarly enhanced by the richness of the yolk in the mayo. As with many French recipes, Lebovitz told me, the goal is “not to create a lot of excitement in the mouth, it’s to build flavors one on top of the other.”

The preparation of the dish is so simple that it barely requires a recipe. Joel Robuchon, the master of French technique who passed away this week, had only this to say, in “The Complete Robuchon”: “Spread a blanket of lettuce on a serving platter. Arrange the halved eggs on top. . . . Dollop each egg with a large spoonful of mayonnaise.” (He even sanctioned using store-bought mayo—although presumably only if you’re in France, where it tends to be more flavorful and less stiff than, say, Hellmann’s.) The dish is also wonderfully cheap: at the famous and otherwise pricey Parisian café Le Voltaire, it costs just .90 euros. But, according to Brenot, oeuf mayonnaise, like many classic French dishes, “looks very simple, but is actually quite complex to do if you want to make it extremely good.” Making a proper mayonnaise, he added, “requires a very subtle approach. The length of the cooking of the egg is also of the essence.” If you want to make good food, he said, “you have to pay attention to it.”

The other day, I brought two eggs to room temperature. I put a small pot of salted water on to boil, and, when it roiled, added one of the eggs and set a timer for eight minutes. While it cooked, I cracked open the other egg, pouring the yolk between the two halves of broken shell until the white had drained off. I whisked it with a little salt, pepper, dijon mustard, and red wine vinegar. Then, drop by drop, I added grapeseed oil—optimally neutral, according to Brenot—whisking furiously, until the yolk became a glassy slick, as thick and as yellow as soft butter. When it had expanded to a few tablespoons, I added more salt and mustard to taste. When the boiled egg had cooled in a bath of ice water, I sliced it in half and placed it on a plate, then covered it with my mayonnaise. I didn’t have any chives, but I made a quick version of my favorite salad and toasted some bread I had smuggled to New York from Tartine in San Francisco.

In her “French Provincial Cooking,” the British cookbook author Elizabeth David wrote, of oeuf mayonnaise, “sometimes, in the search for originality, the most obvious dishes are forgotten.” My oeuf mayo was perfect: balanced and harmonious, the luscious fat of the condiment giving way to the cool lightness of the egg white giving way to the sweet, gently crumbling yolk. I ate it with a spoon. It made me grateful for eggs.

Facebook gives parents control on when kids can use app