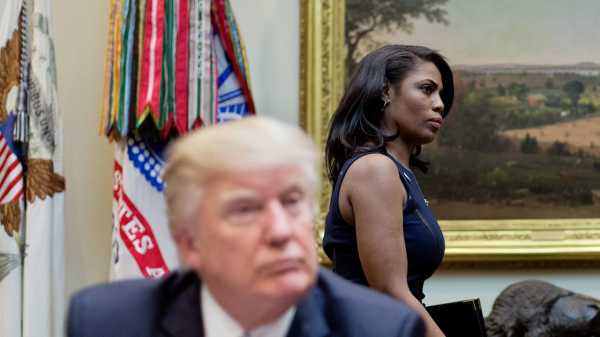 “Unhinged: An Insider’s Account of the Trump White House,” the new dish from Omarosa Manigault Newman, is, in spirit and substance, a formality. Functionally, the book is meant to whisk its maker to her preferred platform, talk television, where she can dole out the beefier takeaways in real time. On “Meet the Press,” she produced a recording, straight from the Situation Room, of John Kelly, the White House chief of staff, firing her from her mysterious role as the director of communications for the Office of Public Liaison. On the “Today” show, she brandished a recording of President Trump reacting to that firing. Moving from network to network, she touts a long-rumored tape of Trump saying “nigger” on the set of “The Apprentice,” as though it were the elixir that would cure tolerance of the intolerable. Her motivation, she says, is patriotism, but her mercenary career is well known.

In short, you don’t really need to read “Unhinged,” which recalls Carrie Bradshaw bloviating at her desk at midnight. (“I had to wonder, if Trump used the N-word so frequently during that season of the show, had he ever used it to refer to either Kwame or myself?”) Much of the book’s information is either mundane, already reported on, or unsubstantiated. The arc turns on an inane semantic argument—that “there is a difference between being a racist, racial, and someone who racializes”—and the fact that, coincidentally, right around the time Omarosa had to find a new gig, she realized Trump was a racist. We zoom through the barrens of what Manigault calls “Trumpworld,” chronicling “The Apprentice Years,” “The Campaign,” and “The White House.” Manigault claims that applicants to “The Apprentice” were tested for S.T.D.s, and that female prospects were subjected to a “humiliating vaginal examination and Pap smear.” She claims that, on the set of “The Celebrity Apprentice,” Trump egged Gene Simmons on as he hit on Ivanka. (“Gary Busey was annoying but entertaining . . . . La Toya Jackson’s energy was very dark.”) She claims that Trump bullied Sean Spicer and Michael Cohen; that he has never read an entire piece of policy; that he has often called Donald Trump, Jr., a “fuckup”; and that he is in mental decline. (In a statement, the White House said that the book is “riddled with lies.”)

Manigault’s selling point is that she has intimate, historic insight into the Trump family—insight one can’t get from Michael Wolff’s “Fire and Fury,” or from Anthony Scaramucci’s forthcoming blitz, “Trump: The Blue-Collar President.” But she can’t seem to choose between dressing herself as a bushy-tailed mentee, whose abstracted loyalty precludes her from seeing the misogyny and racism of her “mentor,” or a savvy career woman, who was willing to play dirty to get ahead. Gone is the conviction of “Every critic, every detractor, will have to bow down to President Trump.” “Now, when I look at things, I’m stunned that I was involved in this kind of shady dealing,” she writes, of dropping a lawsuit against the National Enquirer at Trump’s behest. The Enquirer, she claims, sent a reporter to surveil the funeral of her brother Jack, who was murdered, in 2011. She also claims that Trump brokered a solution: Manigault would serve as the West Coast editor in exchange for letting the matter go. (David Pecker, the Enquirer’s publisher, denies such an arrangement.)

To deliver palace intrigue, you must be well placed in the court. “Unhinged” is obsessed with showing how Manigault, who critics say did nothing in the Administration, was in fact a key presence. Résumé inflation has long been in the Omarosa playbook; she débuted, in the early aughts, by exaggerating her positions under Al Gore and the Clintons. Here she goes further: she wants to prove that, before Trump betrayed her, she was his one true confidante. She claims that when she suspected officials of being leakers—including the senior aide Katie Walsh—she told Trump, and he fired them. When Betsy DeVos, who she claims Trump called “Ditzy DeVos,” attempted to block her from doing outreach with historically black colleges and universities, Trump lifted all obstructions. I became physically repulsed reading Manigault recounting Lara Trump, and then Ivanka and Jared Kushner, calling her after her firing, telling her that they “loved” her. “When people try to understand the dynamic between Donald and me, it begins with shared triumph,” she writes. This comes two paragraphs after she relays a comment Trump made to her after she was fired on “The Apprentice”: “ ‘Can I be honest? I almost consider you a friend.’ ”

The book seems flittingly sincere as a grief chronicle. Throughout, Manigault invokes her family tragedy—her father was murdered when she was young; her second husband, the actor Michael Clarke Duncan, died, from a heart attack, in bed, while she was recovering from a miscarriage—as reason for her surrender to Trump’s flattery. But for Manigault, an ordained minister, to present ego-driven career climbing as a symptom of grief is unpalatable, to say the least. And the flattery does not seem so flattering. When her husband died, in 2012, Trump did not attend the funeral. He sent her a letter that said, “I’m sorry about your loss. I heard Michael was a good guy.”

No one is buying that the hardened reality-show player could not see what was tweeting in front of her. So what is Omarosa really selling? Her product is not simply the alleged tapes but the idea that she may have outmaneuvered Trump. I’ve written before about Manigault’s scrounging embrace of black exceptionalism. Opportunism has never morally burdened her, which makes her self-interest seem both egregious and banal. She has clung to her infamy, in part, by perverting the black worker’s experience of racism. She has always exploited the vantage of the pariah, but has more frequently tried to frame herself as a victim. Even during her post-White House stint on “Celebrity Big Brother,” which she describes in the book as a needed respite, she thought herself persecuted by her housemates, who relentlessly questioned her Trump loyalties. Our infantilization of women in power has, at times, elicited empathy for figures such as Hope Hicks, Melania Trump, and Ivanka Trump. This seems to be what Omarosa seeks. But, for as little as she has gained, and for all she will endure—being called a “lowlife” and a “dog” by the President, most recently—she will never receive it. I wonder why.

Injury takes the good feeling away from Travers