Home Culture One Year of #MeToo: A Modest Proposal to Help Dismantle the Restaurant... 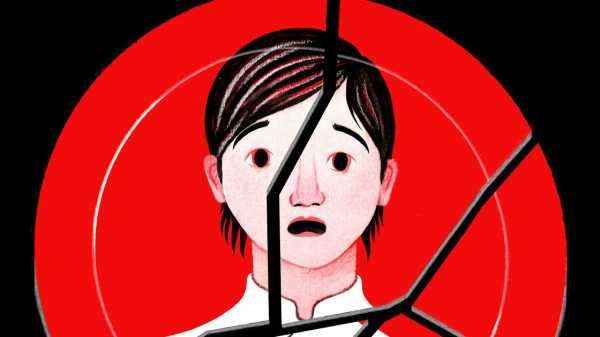 In February of 2017, at a riotous Mardis Gras parade in New Orleans, the Times-Picayune journalist Brett Anderson got a story tip that led him to allegations of sexual misconduct at the Besh Restaurant Group, one of the city’s largest and most influential dining empires, with twelve restaurants that employ more than a thousand people, all under the leadership of the telegenic celebrity chef John Besh. Anderson spent the next eight months investigating. His work culminated in a sweeping exposé of Besh’s company, published on October 21, 2017—a couple weeks after the revelations about Harvey Weinstein published in the New York Times and The New Yorker kick-started the cultural reckoning that became the #MeToo movement. (Besh apologized and stepped down from the company.)

Sexual harassment in restaurants was hardly news: virtually anyone who had spent any time getting paid to cook or serve or host was familiar with the grab-ass, the dirty talk, the forceful flirtations, the eggplant dicks, the spiked shift drinks, the dangers of leaning over to access the lowboy fridge. For a long time, these things had mattered greatly to the victims and very little to anyone else. As Jen Agg wrote on this site last year, “The ‘bro’ culture in kitchens is so deeply entrenched that it has become second nature for many of the people who work there.” Suddenly, the Besh story, riding the momentum of the Weinstein revelations, became a catalyst for a reckoning within the dining industry.

In the months that followed, many other journalists published deeply investigated reports about high-profile abusers within the world of restaurants. The list of fallen celebrity chefs grew. But America has approximately a million dining establishments, employing nearly fifteen million people, which represents close to ten per cent of the U.S. workforce. A cultural shift can’t happen one executive chef at a time. “If we, as a culture, are just going to accept that this is the media’s job, I think we need to be resigned that nothing is ever gonna change,” Anderson told me.

In the past year, I’ve spoken to dozens of women who work in restaurants, from hosts at best-in-the-world fine-dining establishments to fast-food burger flippers. They have been heartened by #MeToo, but are, on the whole, pessimistic about the possibility of systemic reform within the industry. On the ground, in kitchens and in back offices, despite big talk from management about zero-tolerance policies and the importance of taking every report seriously, they say that very little is changing in the day-to-day—harassment is still endemic and accepted. They know that reforming the culture will have to happen at a grassroots level, by training a new generation of managers and cooks within a more inclusive status quo, and empowering current workers to speak up. That is what was so thrilling about the McDonald’s strike last month, when hundreds of female employees in ten cities walked out of work to put pressure on the fast-food company to address sexual harassment within its own ranks.

Around the same time, I sat in on a one-day conference organized by the advocacy group Women in Hospitality United. A hundred or so hospitality workers from around the country—mostly employees and owners of independent, progressive-minded restaurants—gathered in the ballroom of the Wythe Hotel, in Brooklyn, where they were broken into a handful of groups, each tasked with brainstorming ways to address a discrete issue: mental health, the wage gap, support for working parents, cross-restaurant mentorship, and so on. The sense of ambition and urgency was palpable. Still, at the end of the day, as each group presented its ideas, there was a sense of anticlimax. Many proposals seemed impractical. Who would build and maintain the national mental-health database that one group proposed as a resource for overburdened restaurant workers? Who would formalize the mentorship network that another proposed to help women and queer people in the industry feel less alone?

The most striking idea, at least to me, was notable for the narrowness of its scope: an anti-sexual-harassment poster, intended to hang in the back of restaurants next to the OSHA compliance posters, minimum-wage notifications, and other required industry resources. “We want to help people understand what sexual harassment is,” Sophia Brittan, the woman who proposed the idea, said during her group’s presentation.

When I’ve talked with restaurant workers about what it would take to build a culture of respect and empowerment inside restaurants, the idea of a sign or a poster has come up more than once. “I used to get my car fixed at this one place,” a former Applebee’s manager told me, after describing the “exhausting” sexual harassment at her franchise location. “They had signs up that said, ‘We are such-and-such trained’—it was something like, ‘Everyone that works here has had this training, and this training means that we respect women.’ If that was more of a presence in the restaurant, signs saying, ‘This is what we do here, this is the culture we're creating here,’ it would work.”

One anti-harassment poster was created earlier this year by the restaurateur and writer Karen Leibowitz and the designer Kelli Anderson to echo a “Choking Victim” poster from the eighties, like the ones that are ubiquitous in New York City restaurants. Its graphics are simple, direct, and unambiguous, a forceful visual representation of a person’s rights when subjected to workplace misconduct. “In Case of Sexual Harassment You Are Not Powerless,” its header reads. It then lists four steps to take in response: Keep a Record, Tell Your Employer, Make It Official, and Find Allies, with detailed instructions for each. 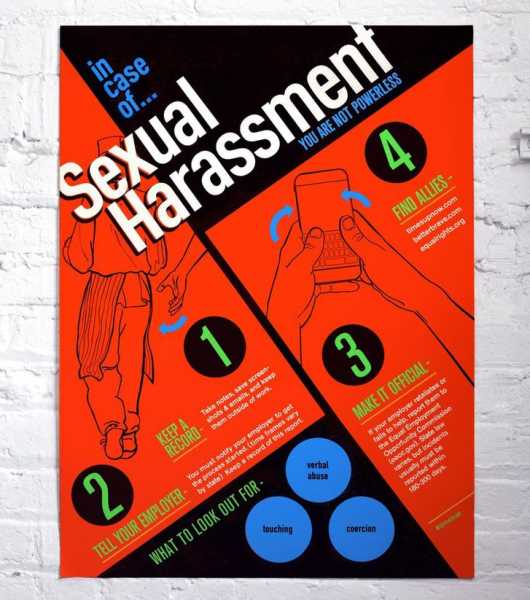 “Not long after the Harvey Weinstein story broke, I started to hear conversations about harassment among Bay Area women,” Leibowitz, who co-owns the San Francisco restaurant The Perennial, told me. “That’s when I started thinking about creating some sort of resource.” The poster débuted in April, and is distributed by the biannual feminist food magazine Cherry Bombe. According to the magazine’s editor-in-chief, Kerry Diamond, though, sales so far have been slow. (A printed version is available for ten dollars in their online store, which also offers free printable downloads in English, Spanish, and Chinese; there is no way to track downloads.) Leibowitz believes that the most effective way to expand the reach of the idea is through third-party restaurant-industry service providers, like OpenTable or the James Beard Foundation, which have relationships with many thousands of culinary businesses. “It doesn’t have to be my poster!” she said. The point is to make an anti-harassment message so ubiquitous that if someone showed up at a restaurant for her first day of work and didn’t see a poster on display, she’d consider it a red flag.

When I mentioned the idea of anti-harassment posters to a friend in a senior role at a major national restaurant chain, she was so inspired that she rushed through the end of our call so that she could float it to her fellow executives. She told me that her company’s restaurants already mandate the display of plenty of posters besides the ones required by law, and that she couldn’t imagine a reason not to hang something like this too. The ultimate goal, Leibowitz said, is to make institutional anti-harassment messages so ubiquitous that if someone showed up for her first day of work at a restaurant and didn’t see a poster on display, she’d consider it a red flag.

One group of restaurants that has embraced anti-harassment posters, it turns out, is BRG Hospitality—that’s the new name of the Besh Restaurant Group, which, in the aftermath of the Times-Picayune investigation, spun off some of its properties and rebranded what remained. The company’s new C.E.O., Shannon White, told me recently that her “harassment-free workplace policy” is hung in the kitchens and offices of every BRG property, along with additional posters advertising the company’s anonymous harassment-reporting hotline and the new company-wide code of conduct. This signage is part of a larger program of much needed reform; a year ago, the Besh company didn’t even have a formal human-resources department.

Getting any action widely implemented in the restaurant world would be radical in its own way; if it were something that speaks directly and unflinchingly to the problem it would be more radical still. In the scheme of things, a poster is a modest weapon against an entrenched culture of sexist and sexual misconduct. But it’s a first step toward a first step: an acknowledgment that harassment exists, that it’s wrong, that it demands consequences, and—perhaps most important—that the people in charge know it. If that sounds absurdly simple, that’s because it is.

The Essay to Read If You Even Think About Wearing Clothes...

Pele on the mend after illness scare

The Bracing Honesty of “Belonging,” a Graphic Memoir About German Identity...