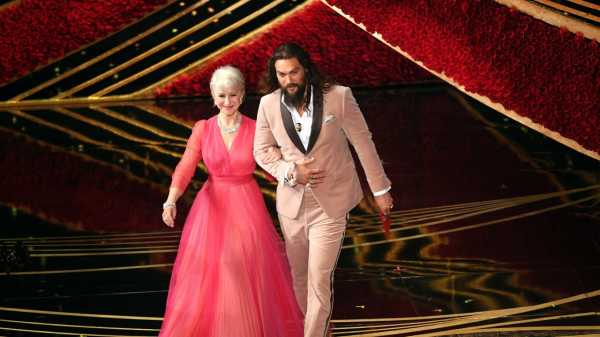 “Jason and I didn’t coördinate our outfits,” Dame Helen Mirren said, while standing onstage next to “Aquaman” ’s Jason Momoa, to present the Oscar for best documentary film. “But it goes to show that these days a Hawaiian god and a very mature Englishwoman can actually wear the same color. We can both wear pink.”

Mirren and Momoa’s pinks did not exactly match—Mirren’s pleated Schiaparelli gown was made of layers of grapefruit and magenta, like fruit-punch concentrate (the designer’s iconic “shocking pink” shade), while Momoa wore a dusty-rose velvet Fendi suit (complete with a matching wrist scrunchie), as an homage to the late Karl Lagerfeld, who designed the suit for him personally before passing away earlier this week. Momoa’s wife, the actress Lisa Bonet, also wore Fendi—a lacy dress in the pastel pink-purple of a lavender macaron.

Pink—and, to a lesser extent, red, pink’s bolder, tartier sister on the color wheel—has been one of the big winners of the evening. The pre-show was a sea of rosy tulle, ballet-slipper satin, and column gowns the color of watermelon-flavored Blow Pops. My favorites of the blush rush: Gemma Chan, in fuchsia high-necked Valentino, which is so bright that staring at it for more than a few moments can cause hallucinations; Kacey Musgraves, fresh off her Grammy win for Album of the Year, in a fluffy bubble-gum Giambattista Valli confection spun out of spare ballerina tutus; and Angela Bassett, in Reem Acra, with a supersized watermelon bow at her collarbone. 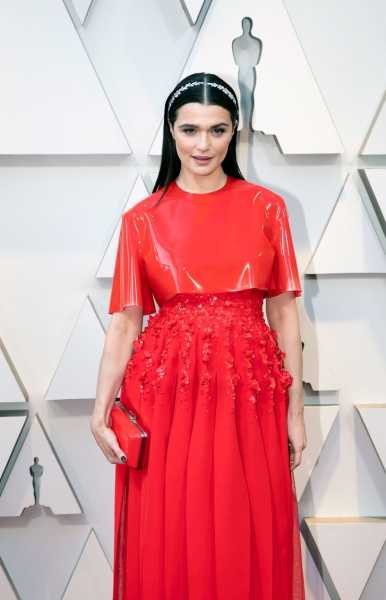 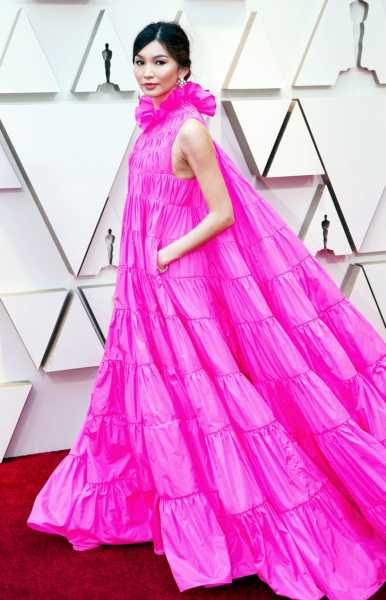 And then there was red: Rachel Weisz, wearing floral Givenchy couture with a boxy cherry latex top, leaning into the domineering power of her role in “The Favourite.” Hannah Beachler, the production designer for “Black Panther” (she became the first black woman to win in the category), wore ruched scarlet, and had at least ten pounds of ruffles perched on her left shoulder, like a friendly parrot.

The rapper turned actress Awkwafina wore a glittery pink Dsquared2 pants suit with a Liberace-esque ribbon tied around her throat, which made her the fulcrum point for the night’s other big look: women in tailored suits. Amy Poehler wore a black-and-blue Alberta Ferretti tuxedo; Elsie Fisher wore a three-piece Thom Browne suit with patent-leather Chelsea boots and a hair barrette, like a precocious teen-age Margot Tenenbaum; and Jennifer Hudson wore black satin pants with a theatrical cape to sing a song in honor of Ruth Bader Ginsburg, bringing a touch of judicial chic to the broadcast. 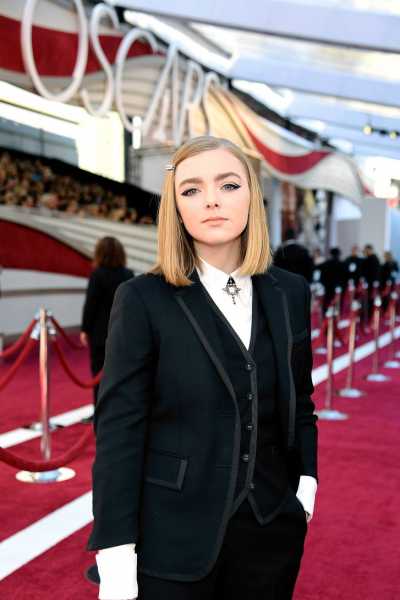 There was a compelling duality in these trends: the soft power of Valentine’s colors and the harder lines of dapper suiting. In either case, it looked like women wearing exactly what made them feel beautiful and strong. And it was a strong night for women: Poehler, Tina Fey, and Maya Rudolph (who was also in maximalist pink floral) opened the show. Melissa McCarthy had the best visual gag of the night, by wearing a rabbit-covered coat, in homage to “The Favourite.” Like Beachler, the costume designer Ruth E. Carter became the first black woman to win in her category. Lady Gaga, dressed like Marilyn Monroe, with platinum hair and a thirty-million-dollar Tiffany canary diamond, won an Oscar for co-writing “Shallow.” And “Period. End of Sentence.,” a short film about women in rural India who fight against the cultural stigma around menstruation, won the award for best short-subject documentary. “I can't believe a film about menstruation just won an Oscar!” the film’s director cried in her acceptance speech. Even if the Oscars have a ways to go in terms of honoring women—nominating more female directors, for example—there were signs, on Sunday night, that the Academy has been forced to start thinking pink.

Marriott’s data breach may be the biggest in history. Now it’s...

It’s disturbingly easy to trick AI into doing something deadly

UK Can Cope With Surge in Unemployment – Work and Pensions...