Home Culture Our Favorite Songs of 2018 | 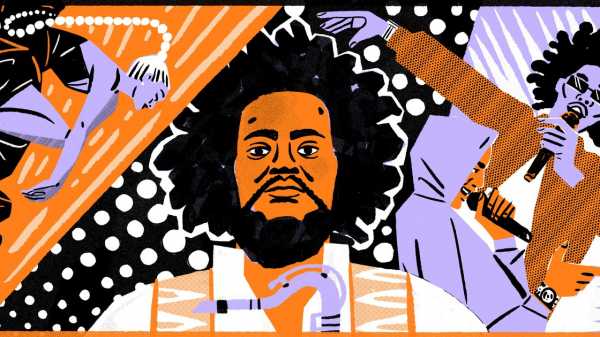 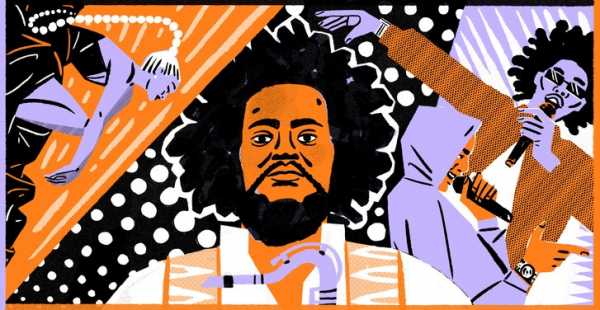 There’s a dreamy, floating quality to Omar (Cuco) Banos’s songs that belies the turbulent, sad-boy emotions that animate them. “I’m a Cancer, bro,” the twenty-year-old Chicano from Hawthorne, California, told an interviewer earlier this year. “So I’m, like, stupid emotional.” Banos became a bedroom-pop heartthrob in early 2017, when he uploaded “Lo Que Siento” to SoundCloud. It managed to sound a bit like a sixties soul ballad and an eighties slow jam, made by someone who had internalized the twisty cadences of today’s rappers. Banos flitted back and forth between English and Spanish, as though some of his heart’s most sensitive whims simply couldn’t be translated.

Earlier this year, Cuco (which is also the name of Banos’s band) released “Sunnyside,” a majestic tune that’s twee and jangly one moment, sunny and psychedelic the next. There’s a gorgeous purity to it—Banos’s sonorous chords and blissed-out chorus are his only way to cope with a love who is “nowhere near.” No worries, though. Throughout the song’s charming video, Banos and his bandmates horse around gleefully, and heartache is forgotten to boyish camaraderie. On a distressingly hot night earlier this summer, I saw them play a late show at the Mercury Lounge, in Manhattan. “I can’t tell if I’m sweating or crying, bro,” Banos said, as the band took the stage. It was hours past most people’s bedtimes. But they were incredibly stoked, and the exhilaration was infectious. The future felt wide open. “It’s cool as fuck to be here,” he said. “And to be Mexican.”—Hua Hsu

There’s something slightly off about Tirzah Mastin’s superb début album, “Devotion.” Part of it has to do with the producer Mica Levi’s eccentric take on electronic pop and R. & B., which is full of tiny imperfections, moments that feel warped and lopsided. Most of the time it’s Tirzah herself, whose flickering, pulsing voice manages to sound both coolly detached and overwhelmingly intimate. On an album that’s full of these blemished gems of alien pop, “Guilty” is a particularly entrancing little glitch: regal, grunge-era guitars; Mastin admitting that she’s the one who’s been at fault. “Did I let you take the blame when I should have been faithful?” she asks. The use of Auto-Tune gives the question a hint of indifference. “What are you gonna do / What are you gonna do about it?” she asks over and over, until the words sound like a smeary taunt. The answer is nothing. You have no control, and there’s nothing to be done.—H.H.

The name doesn’t roll off the tongue—it stands for “Strictly Only Brothers x Real Boi Entertainment,” and the “X” is silent—but these four teen-agers from Vallejo, California, rarely do things the easy way. At a time when hip-hop tends toward leaden, lumbering rhythms and slow-motion psychedelia, Slimmy B, Lul G, Yhung T.O., and DaBoii are at their best when rapping as loudly and as fast they can over eighties-sounding high-energy beats. The group had a stellar year, releasing two albums (“Gangin,” “Gangin II”) and stealing the spotlight on the “Black Panther” soundtrack with the wheezy, bruising “Paramedic!” “Paid in Full,” which appeared on “Gangin,” finds DaBoii in a particularly obnoxious mood, boasting by himself in the fast lane. The producer Quez updates the galloping freestyle music that resounded through Bay Area malls in the late eighties, slapping some cheap synth horn fanfares over a booming low-end purr. DaBoii occasionally races ahead of the beat, a one-man riot of foulmouthed threats and reminders that he’s better than you. There’s no time for a hook, just a kind of delightful, prancing spite, and the words coming out of his mouth aren’t even the rudest part of the song.—H.H.

There is perhaps no force in music more persistent than Pharrell Williams, the producer who helped shape the retro-futuristic sound of pop and hip-hop in the early two-thousands. At times, this persistence is unwelcome, as anyone who has endured the tiresome lite-funk of songs like “Happy” or Daft Punk’s “Get Lucky” can attest. But at other times it offers the same thrill it did fifteen years ago. See: “sweetener,” the title track from Grande’s latest record. The song finds the sweet spot—pun intended—between nineties R. & B. and hip-hop and contemporary pop, first advertising itself as a ballad about the hardships of life before jolting into its sticky chorus—a sultry instructional guide that features a hiccuppy beat and the rhythm of a nursery rhyme. Get it, hit it, flip it, twist it, mix it, kiss it, Grande chants, assisted by Pharrell’s unmistakable ad-libbing. (“Sheesh!” he interjects.) Together, the pair generate a whoosh of lusty, irresistible energy that puts “sweetener” on the list of Pharrell’s all-time greatest hits, right up there with Britney Spears’s “I’m a Slave 4 U” and Kelis’s “Milkshake.”—Carrie Battan

“Hard” is a collaboration that succeeds in spite of itself. In fact, it’s a collaboration in the loosest sense of the word—No Jumper, to whom this song is credited, is not even a recording artist. It’s the moniker of Adam Grandmaison, an underground hip-hop podcaster infamous for ingratiating himself into the so-called SoundCloud rap scene and conducting lengthy, irreverent interviews with some of its most chaotic young stars. He does not rap on the song, and he probably has no business having a major-label record deal, but these are the times we live in. Meanwhile, it’s unlikely that Tay-K—the Texas teen runaway currently facing murder charges—and the Memphis breakout star Blocboy JB were in the same room while making this song, or that they have ever met. Again, these are the times we live in.

Still, “Hard” has muscled its way around the Internet with its raw, pummelling sound and wily, sideways lyrical performances: “School was very hard / Bitch I’m very hard,” Tay-K raps. “My momma so hard / My daddy go hard / Tay-K fairly odd / Tay-K very hard.” Later, Blocboy begins his verse with the single most entertaining encapsulation of hip-hop’s current fascination with rock music: “Rrrrrrrock like a guitar!” he roars. “Hard” is a schoolyard taunt. It would be menacing if it weren’t one of the funniest songs of the year.—C.B.

Turnstile, “(Lost Another) Piece of My World”

This was the year that my poptimism curdled into…. Well, certainly not into rockism, but perhaps into a general fatigue with the numbing effects of the mainstream. And so, while I don’t pretend to be an expert of the genre, Turnstile’s interloper-friendly style of hardcore punk was a refreshing spike of adrenaline. Turnstile, a five-piece Maryland band, are not precious about a genre typically known for its rigidity and piousness. They’ve signed to a major label. They’ve collaborated with Diplo. They’ve toyed with the stylistic guardrails of hardcore. And yet, “Lost Another Piece of My World,” like much of their excellent album “Time & Space,” from 2018, accomplishes exactly what the best hardcore should. At just shy of two minutes, it’s an exceptionally concise piece of pounding rock with an unexpectedly profound message. For me, it helped reframe hardcore, not as an élite, insular genre but as a palate cleanser.—C.B.

Grande was the siren of 2018; her ethereal Florida calls tugged us toward the rough deep end. I’d been anxious to see how Grande, who had watched a terrorist murder twenty-three of her fans at her concert in Manchester, in May of 2017, would move forward artistically after that tragedy; I’d wondered whether she should at all. On “Sweetener,” her breakthrough album, trauma is bright and sadness is luxurious and God is a woman, cooing about resilience in a minor key. I wore out, in particular, “no tears left to cry.” Spectacularly melancholic, it is a grief song in which Grande sounds so emotionally depleted that she has counterintuitively reached a plane of euphoria. No capitulation to disaffection or jadedness, the message is one of believing in life because that is the only thing left to do. Her voice is breathless, as she races to keep up with the new state of mind she has drawn. “I’m lovin’, I’m livin’, I’m pickin’ it up.” The disco despair relates to Gloria Gaynor’s roaring idea: we have to delude ourselves into joy; maybe, we will survive.—Doreen St. Félix

Writers will say that they like writing to the sound of film scores because of the music’s built-in unobtrusiveness. The truth is that we are busy casting ourselves as protagonists, sculpting our own private capers around the sweeps of strings. Listening to Britell’s score for Barry Jenkins’s film adaptation of “If Beale Street Could Talk,” I get lost in the souls of the protagonists Tish and Fonny, two New Yorkers felled by strong love. In Jenkins’s film, “Eros” plays as Tish and Fonny lay down their perfect bodies on a perfect surface and make perfect love, as the unperfect world outside makes designs on their futures. The track’s steady percussion is a heartbeat, and the cyclical turn of notes is nervous eyelashes fluttering. I find the song so gravely gorgeous that it feels tacky to even pretend to write to it. Instead, I take a break and daydream.—D.S.F.

Washington’s “Fists of Fury” is as dense as religion and as spiritual as cinema. On the track, the virtuoso saxophonist picks up and holds to the light the theme from Bruce Lee’s film of the same name, from 1972, finding in its martial aggression a current of furious grace. That grace is the force that has animated centuries of black survival—and it powers the nearly ten-minute song, which opens Washington’s album “Heaven and Earth.” Glory is a place. Washington is dead set on getting us there. An all-knowing choir surges as the vocalists Dwight Trible and Patrice Quinn sing, “We will no longer ask for justice / Instead we will take our retribution.” The music is fear-inducing, in the church sense. Is Washington soundtracking the exodus? Three movements featuring raging piano, his invincible sax, and that Judgment Day black scream will have you thinking so.—D.S.F.

The race to be the next British prime minister, briefly explained

Elizabeth Warren warns Equifax could “wiggle off the hook” for users’...