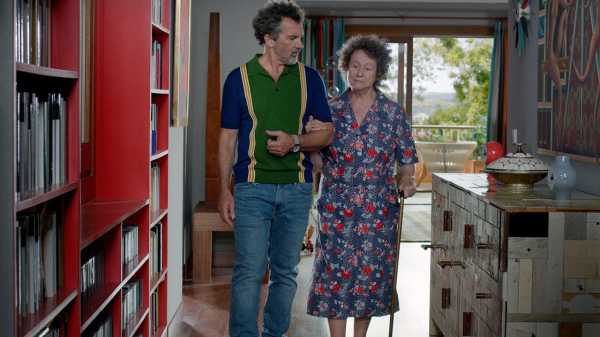 There’s a rich fund of experience and emotion in Pedro Almodóvar’s new film, “Pain and Glory,” and also a sense that the director is packaging and delivering it rather than discovering and observing it. The movie runs headlong at more than its slender and tightly formatted drama can hold; it grabs at elusive feelings and memories and evokes hard-won wisdom, which it offers only in trimmed and polished fragments. The film’s pleasures and its frustrations, its energies and its enervations, are inseparable.

It starts with a man, Salvador, played by Antonio Banderas, alone and submerged in a swimming pool, doing what looks like a still and concentrated form of exercise—a surmise quickly reinforced by a brief shot of his back that shows a long scar running along his spine. Next, a vision from his memory: four women washing clothing in a river, accompanied by Salvador as a boy (Asier Flores). One of the women is his mother, Jacinta (Penélope Cruz). The women talk freely about sensual things—wishing they could swim naked in the river, as men do. Salvador admires the small fish swimming around the soap in the river; the women carry big white sheets that shine in the sunlight and flutter in the wind amid the green landscape, an image of rapturous beauty that’s amplified by the women’s spontaneous singing of a hearty ballad.

Such a delicious moment of childhood joy sumptuously remembered in rich visual detail could seemingly go on for hours, but here it goes onscreen for a few seconds, intercut with a couple of banal closeups of the child Salvador smiling, as if his delight in the moment weren’t already apparent. The memory and the pleasure aren’t enough; Almodóvar has a story to rush into. The adult Salvador is a famous movie director who has decided to retire, and the reason eventually comes out: he’s enduring chronic physical pain of many sorts, some of which relate to his recent spinal-fusion surgery, and also anxiety and depression, and he is also enduringly heartbroken over the death of his mother, four years ago. At the same time, he is looking back at his life and work: he has rewatched a film that he made thirty-two years earlier, on the occasion of its impending revival, and he reconnects with its star, Alberto Crespo (Asier Etxeandia), with whom he fought at the time and hasn’t spoken with ever since. Salvador has written an autobiographical text that involves both his childhood and a relationship in the early eighties with a man named Federico, who was a heroin addict. Now Salvador tries smoking heroin—in the company of Alberto, a longtime user—as a way of coping with his pain (and, as Alberto suggests, as research); he also confers his autobiographical text, called “Addiction,” to Alberto, who plans to perform it as a one-man show.

Meanwhile, Salvador, often under the drug’s influence, returns to his reminiscences, especially of his mother, who—portrayed in her younger years by Cruz, and in her old age by Julieta Serrano—displays a wondrously complex blend of mysterious tradition and forward-looking practicality, of contentious forcefulness and enveloping, self-sacrificing love. Yet her seemingly total devotion to Salvador conceals a bitter and reproachful frustration that she, at long last, vents to the adult Salvador, leaving him with a sense of guilt over matters for which, nonetheless, he doesn’t and can’t apologize. The stifled conflict underlying their relationship, which is drawn out in Salvador’s sharp recollection of his last times with her, also has a distinctively movie-centric and autofictional aspect—as she herself recognizes, drolly yet bluntly expressing displeasure in seeing herself and her neighbors depicted in his movies.

Yet even such keenly felt events, whether from the deep past or the recent one, more or less snap onto the screen and snap off of it, as if in synch with Almodóvar’s certainty about what he wants to say. He realizes intentions and assertions rather than experiences. The movie’s expressive moments—and there are many—are largely uprooted, decontextualized, and dematerialized, planted like index cards rather than allowed to unfold and to develop. One remarkable scene involves Salvador’s agreement to join Alberto onstage for a Q. & A. after a screening of the film that they made together. It doesn’t quite come off as planned, but it comes off nonetheless, in a sequence that revives more than the film itself—it revives the enmity between the two men and brings to light Salvador’s stringent standards and severe, pugnacious candor. The sequence is a remarkable—and a remarkably brief—one. Its blend of the comedic and the affecting, of the musingly reminiscent and the sharply combative, is stamped on the screen with no sense of time.

Alberto delivers one of the movie’s most developed set pieces: his onstage performance of the text “Addiction.” Yet, even here, where the voice inhabits the text with theatrical nuance, Almodóvar doesn’t find a satisfyingly drastic way to present the actor’s physical presence or the theatrical framing of the monologue. What’s seen is dismissed, and the screen time merely passes while the bittersweet recollection of a lost love (to heroin addiction) is dispensed and other dramatic events in the audience come to the fore. Similarly, Salvador’s cherished childhood memories also get short cinematic shrift. When young Salvador and his mother move to the village of Paterna, to join his father there, the setting itself—of whitewashed stone and remarkable subterranean houses (Jacinta bitterly calls theirs a “cave”)—turns up as a mere backdrop that’s quickly dropped. What the film director Salvador recalls are key moments in town—notably, his encounter with a laborer named Eduardo (César Vicente), who is illiterate. Eduardo and his wife approach Jacinta to have the studious young Salvador write a letter for him. Jacinta further agrees to have her son teach the man reading, writing, and arithmetic—in exchange not for money but for in-kind work to improve the family’s underground dwelling.

On the other hand, a crucial sequence that follows on this barter agreement evokes more than just the character Salvador’s formative experiences and does more than hint at Almodóvar’s own core experiences—it suggests, as if backhandedly, Almodóvar’s cinematic philosophy, one that pervades the rest of the film, and perhaps his entire career. It’s a peculiar and powerful idea of a certain negativity, a certain limit. The scene in question (to be as un-spoiler-y as possible) involves young Salvador’s sexual awakening, which occurs when he sees Eduardo’s naked body—which the movie shows frankly. That scene is the only one in the entire movie that gives the sense that Almodóvar needs the image—not the idea that gives rise to the image, not the story, but the specific results of specific decisions regarding the camera.

This is the moment that matters, cinematically—a moment beyond drama, a subjective and intimate experience that leaps out of the story. The movie’s stories of familial and romantic love and professional achievement, the knowledge that’s won, the emotion that arises, the wisdom that he dispenses, with heartfelt tenderness, amiable wit, elegant sophistication, antic or melodramatic theatricality—is anchored in a sensuality, a physicality, a temporality that they don’t realize. The movie’s distillations of great passions are, for the most part, stated rather than created. Almodóvar’s personality, his wise observations and perceptive reflections, outrun the inventiveness with which they’re delivered.