Home Culture People Are Stacking Too Many Stones | 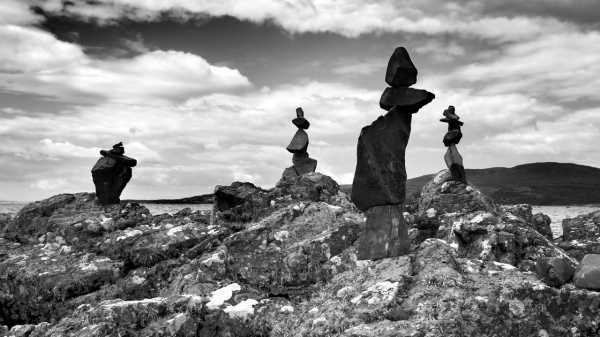 The photograph in the Facebook post is pretty: piles of red rocks balanced at the edge of a cliff, suggesting a miniature mirror of the jagged rock face opposite. The stacks look like small shrines to mountain solitude, carefully balanced at the edge of a precipice. But when Zion National Park posted the photo, in September, the social-media coördinators for the park included a plea: “Please, enjoy the park but leave rocks and all natural objects in place.” The post noted the “curious but destructive practice” of building small stone towers, and said, “stacking up stones is simply vandalism.”

The balancing of stones is an elementary kind of creation, not unlike the building of sand castles. Stone stacks, or cairns, have prehistoric origins. They marked Neolithic burial grounds in what is now Scotland, guided nautical travels in Scandinavia, and served as shrines to the Inca goddess Pachamama in Peru. Contemporary stone stackers, then, are taking up the mantle of an ancient and artistic tradition. In the past decade or so, though, there has been an explosion of cairns around the world—in national parks, in the Scottish Highlands, on the beaches of Aruba. Park rangers, environmentalists, and hikers have all become alarmed, to varying degrees. The movement of so many stones can cause erosion, damage animal ecosystems, disrupt river flow, and confuse hikers, who depend on sanctioned cairns for navigation in places without clear trails.

The posts found within the #RockStacks and #StoneStacking hashtags on Instagram range from amateurish (a couple of stones against the backdrop of the ocean) to seriously impressive (round stones balanced improbably, or a sharp rock standing on end atop a pebble). It is common for multiple stacks to appear in a single picture; they look like chimneys or gravestones or maybe the ruins of a lost civilization. Inspired by social-media posts, new rock stackers are taking up the hobby, and the piles of stones are proliferating along with the pictures of them. After all, replication is not only a side effect of social media; it’s part of the point. “Rock stacking is a way of quickly making your mark and having an image of it. People are posting pictures of them on Instagram, saying, ‘I’ve been here and I made this,’ ” John Hourston, the head of a small volunteer-run environmental organization called the Blue Planet Society, said. He first noticed the boom when he visited remote beaches in Orkney, Scotland, and found them littered with rock piles. He said, “It struck me as a real shame, because there are very few places where you can still find solitude and seclusion, and here they were absolutely covered by the footprint of man.”

Hourston and the Blue Planet Society decided to call attention to the ecological impact of stone stacking, wading into a contentious debate. “This is one of the most divisive issues we’ve ever covered,” he said. The stackers are accusing him of making mountains out of pebbles. National parks are caught in the crosshairs of the debate, too. In 2016, a previous post on Zion National Park’s Facebook page about stone stacking got more than twenty-six hundred comments, as people bitterly debated whether small towers of rocks could really be a problem.

It’s easy to see a frustrated stone stacker’s point of view: it’s a meditative and creative activity; the impacts of a single stone stack are probably negligible compared with, say, driving; and it’s a means of spending time outdoors that seems to run counter to the spirit of social media in its emphasis on concentration, slow movements, and communing with the natural world. The calamity of the stone stack, in our anxious times, seems admittedly minor. But it’s a prominent example of how social media can generate scale, transforming an activity that would be mostly harmless in isolation into something with planetary impact. Aesthetic fads can go global now, with strange consequences. “Social media has kind of popularized rock stacking as a meditative activity, and you used to have a handful of people doing it, but it has really escalated over the past few years on public lands,” Wesley Trimble, the program-outreach and communications manager for the American Hiking Society, said.

#StoneStacking is showing no signs of slowing down. In Acadia National Park, volunteers destroyed nearly thirty-five hundred rock stacks, on two mountains alone, in 2016 and 2017. “I would probably equate the rock-stacking phenomenon with the painted-rock phenomenon, in how it’s driven by social media,” Christie Anastasia, the public-affairs specialist at Acadia, said. Painted rocks are a kind of social-media treasure hunt; people leave brightly decorated rocks in parks, with their social-media handles noted on the undersides. The person who finds the rock can then send a message to the person who left it. Acadia park employees have collected hundreds of them during the past year. The painted rocks now sit in a purgatory of bins, while the park staff figures out what to do with them. “We’re still cogitating on it,” Anastasia said. “We thought about throwing them into the ocean, but there might be chemicals in the paint. We’ve thought about throwing them in the fire. We’re still deciding. But they really have no place in a national park.”

What’s to be done about all this rock foolery? Anastasia said that she sends gentle Facebook messages to anyone who leaves an account name painted on a rock. On the Isle of Skye, a group of about twenty local volunteers brought wheelbarrows to a popular rock-stacking spot and spent a Saturday dismantling the stacks and transporting the stones back to where they belong. It’s human vs. human at this point. Meanwhile, there are rocks somewhere else that are being slowly stacked, one by one by one.

Being an Artist and a Mother |