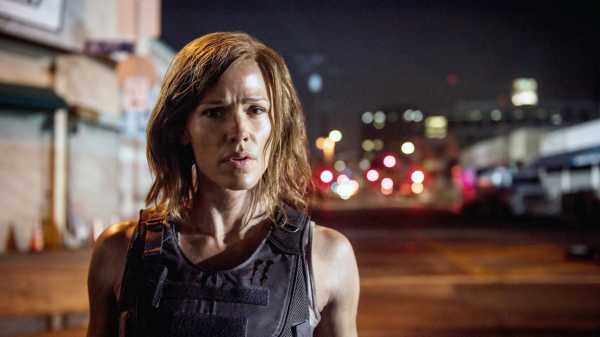 Mediocre movies often appear and then disappear, as though they’d never been, but “Peppermint” (directed by Pierre Morel and written by Chad St. John), which opens today, leaves a trace of slime that’s hard to wipe up—and leaves the feeling that it would be better for the world at large if this movie hadn’t been made. It’s a new version of an old genre, the vigilante tale, but with a special whiff of prejudice, hatred, and resentment that—for all the film’s absurd artifice—blend all too readily into the distorted mental landscape of current American life. Its subject is a long-familiar bugbear of respectability and decency, the drug trade, which it looks at with a despicably ignorant and contemptuous perspective.

Jennifer Garner plays Riley North, an employee in a Los Angeles bank whose husband, Chris (Jeff Hephner), runs an auto-repair shop. They live in a modest house; she and their daughter, Carly (Cailey Fleming), endure the contempt of the school’s rich kids and their parents (one in particular, played by Pell James, is especially cruel). A friend lures Chris into a scheme to rob drug dealers; Chris backs out, but he’s nonetheless implicated. Afterward, while the North family is on an holiday-season outing, gang members murder Chris and Carly. Riley survives the attack; she identifies the killers in a lineup, but to no avail. A cabal of corrupt officials—including a police officer, a district attorney, a defense attorney, and a judge—helps to free the suspects. Riley then vanishes. Five years later, she resurfaces as a lone killing machine whose targets are the entire drug network and the officials who are in its grip.

From the start, Riley’s bloody acts of vengeance have a self-sacrificial cast. She endures grievous wounds, and, because she is living off the grid and unable to risk exposure in the medical system, she treats them herself, with a staple gun and duct tape. What’s more, to carry out her plan for vengeance, she lives undercover in the guise of a homeless person on the city’s Skid Row—where she’s treated like its guardian angel, and celebrated as such in a mural, because she has single-handedly made it a safe neighborhood.

Moving fast through drug dealers’ warehouses, safe houses, and homes, Riley shoots whomever she sees moving, or, for that matter, standing still (except for one woman, who has been beaten into submission by a drug lord and is then rescued by Riley). But, when she has a bit of leisure to formulate and enact a plan, Riley reveals herself to be not only a killer but also a torturer, as when she nails a retired judge’s hands to his desk and ties him to his chair with detonating cord. Morel directs the movie’s scenes of violence with a cool swagger, an understated briskness that dispatches victims with just enough blood to titillate, not enough to disgust. He shies away from pain, except for Riley’s, because the movie is built on a hierarchy of victims—those who deserve what they get and those who don’t—and its flip, slick aesthetic reflects that narrow, undoubting perspective.

“Peppermint” is a racist film that reflects the current strain of anti-immigrant politics and its paranoid focus on MS-13. It features a diverse cast of actors in roles that go beyond stereotypical criminals (including Annie Ilonzeh and Eddie Shin, as F.B.I. agents, and John Ortiz and Method Man, as police officers), but its virtuous nonwhite characters are all isolated, as if diluted in number and dissolved in the institutions and manners of white Americans. In the terms of “Peppermint,” one Latinx person is a constructive exception; two are huddled, passive and dependent, in an encampment of the homeless; a group of them working together is a menace. It’s emblematic of the movie’s approach that its one exemplary mark of Latinx identity, a shop that manufactures piñatas, is a front for drug dealers.

The movie’s jaundiced depiction of multi-ethnic American society is anchored in its view of the North family as middle-class white people caught between a criminal underclass and an indifferent or contemptuous élite. This tendentious vision meshes with the film’s view of American institutions over all. “Peppermint” is a movie about drugs that has nothing to say about the ongoing absurdities and injustices of a legal system that prosecutes users and dealers alike, not a word about America’s ridiculously high rates of incarceration and the disproportionate incarceration of people of color, not a word about corporate complicity in the opioid crisis. In a film in which most of the villains—and most of the victims—are Latinx, there isn’t a word about the politics of immigration.

Though there isn’t any explicit politics in the film, there is an intensely and biliously political dimension to “Peppermint” ’s ingrained and pervasive cynicism regarding law and institutions, regarding police practices and the constraints placed on law enforcement. A final fillip of cavalier connection between police and vigilante practices suggests that American heroism is defined by unlawful actions undertaken by the agents of law, acting in their own name in unleashing violence against those whom, in their determination, deserve it. “Peppermint” is a movie of unmitigated ugliness, a reflection and intensification of the current of hate that is currently coursing through the American mainstream.