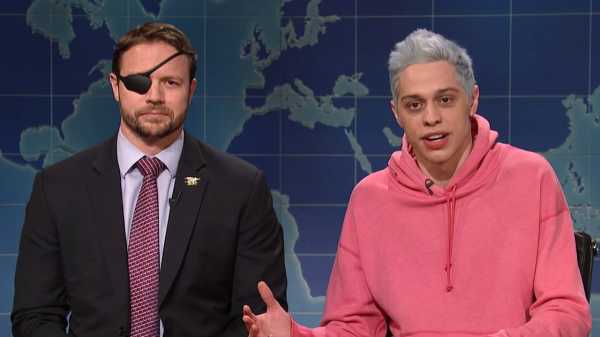 This past week, the seasoned “S.N.L.” performer Kenan Thompson made the rounds of the morning and daytime talk shows to promote his role as Mr. Bricklebaum, the Grinch’s best friend, in the new Dr. Seuss movie, and found himself in the unfortunate position of having to handle damage control for his younger “Saturday Night Live” co-star, Pete Davidson. “He’s caught a fair amount of flak,” Craig Melvin said, on NBC’s “Today.” “You’re kidding?” Thompson deadpanned. “What happened?” What happened is that, in a “Weekend Update” bit meant to skewer the physical appearances of midterm-elections hopefuls from around the country (the Florida G.O.P. gubernatorial candidate, Rick Scott: “He looks like someone tried to whittle Bruce Willis out of a penis”), Davidson made fun of Lieutenant Commander Dan Crenshaw, a Republican and former Navy SEAL running for Texas’s Second Congressional District, and caused an uproar. “This guy’s kind of cool,” Davidson said, as an image of Crenshaw wearing a patch over his right eye appeared on screen. “You may be surprised to hear he’s a congressional candidate from Texas, and not a hitman in a porno movie.” Crenshaw lost his eye to an I.E.D. in Afghanistan.

On Monday, Thompson, whose father served in Vietnam, was defending Davidson while admitting that he may have crossed a line. By Tuesday, he was on “The View” suggesting that the controversy would be addressed that weekend. “It’s not our intention to disrespect anyone,” he explained. “Our whole thing is to just be artists and hold up a mirror.” The thin border between the news that “Saturday Night Live” takes in for quick comic digestion and the news that it makes in the days before and after its weekly broadcast is once again at peak permeability. On Saturday night, after winning the seat in Texas, Crenshaw stepped through the looking glass and rolled up to Davidson at the “Weekend Update” desk. Davidson apologized, and Crenshaw pretended to receive a call on his cell phone. His ringtone was “breathin,” by Davidson’s recent ex-fiancée, Ariana Grande. The congressman-elect got in some jabs about Davidson’s newly dyed hair (“He looks like if the meth from ‘Breaking Bad’ was a person.”) and then dove right into sombre words about national unity and Davidson’s own loss: his father, a firefighter who died during the rescue efforts on 9/11.

It wasn’t the only message moment of the night. A not-very-funny prerecorded sketch, in the mode of the U.S.A. for Africa anthem “We Are the World,” from 1985, had cast members appealing to our common small-scale gripes (wet jeans, soft apples, people who say the book was better than the movie) over our more intractable ideological differences. A much better #TimesUp sketch had Chris Redd rapping with Thompson, Future, Lil Wayne, and Davidson. Earlier this season, Redd and Davidson knocked it out of the park with a trap-style music video about the threat of climate change. This time, Redd and company turned their attention to respecting women in the club. “That booty got insurance. That booty got Progressive,” Lil Wayne puns, after Thompson and Redd skulk up to unguarded drinks and cover them with coasters.

But not every message moment could be pulled off with humor. At the end of his opening monologue, the host, Liev Schreiber, nervously stopped kidding around and commended Americans on a significant turnout in the midterm elections. Earnest addresses of this kind have a long history in comedy, on S.N.L. and elsewhere. Charlie Chaplin came up from the vaudeville stage, through the silent era of movies, and, fitfully, into the brave new world of talkies. All along, he brought his left-wing ideas with him, but his political sympathies typically lingered below the surface, popping up only now and again when it suited the scene and could get a laugh. In the film “Modern Times,” from 1936, Chaplin as the Tramp held a mirror up to the Great Depression. In one scene, wandering the streets of a chaotic city, he picks up a flag that falls from the back of a truck, waves it frantically to get the truck driver’s attention, and, as a crowd bearing banners of liberty and unity fall in behind him, he ends up accidentally leading a protest march. Four years later, as Europe was being torn apart by the Second World War, Chaplin took on Nazism and anti-Semitism in “The Great Dictator,” his biggest box-office hit. At one point, Chaplin, playing a Jewish barber who is mistaken for a fascist dictator, delivers a monologue to the audience. “I don’t want to be an emperor. That’s not my business,” he says, unable to meet the camera’s gaze. “I should like to help everyone if possible—Jew, Gentile—black man, white.”

During production, the comedian came under pressure for making an “anti-Hitler” film. After it came out, he was criticized for watering it down with a sappy speech. Chaplin later regretted making the movie, but not because he had been too serious or too political. “Had I known of the actual horrors of the German concentration camps, I could not have made ‘The Great Dictator,’ ” he wrote in his autobiography, in 1964. “I could not have made fun of the homicidal insanity of the Nazis.” And yet, there are few today who wish the film did not exist.

The shaky boundary that separates “S.N.L.” ’s jesters and the objects of their jest, the surface that lets comedians offer mere madcap reflections rather than make coherent political expressions, often breaks when history strains the imagination, when matters are quite serious, when we most need to laugh. On Wednesday, the Attorney General, Jeff Sessions, announced that Donald Trump had asked him to resign, and the country began wringing its hands over the fate of Robert Mueller’s investigation into Russian interference in the 2016 election. A smaller but still sizable subset of people worried they might never again see Kate McKinnon play Sessions as a rascally Southern possum, clawing at the President’s shoulders. Thus, in the cold open, with her usual Chaplinesque flair, McKinnon scrambled out from inside a desk and bunched up her mouth. “I don’t understand what I did wrong,” she complained to Beck Bennett, who was playing Vice-President Mike Pence. “I put kids in cages. I said no to gays. What more did y’all want?”

Not much more. Only to acknowledge the blessing that, in these times, there’s still room for sketches like the one starring Schreiber and Leslie Jones in a hallucinatory parody of the TV show “House Hunters.” The bit intersplices a scene of Jones and Schreiber enjoying white wine, with clips of their characters plummeting down a “vertical” hardwood floor and Schreiber using a toilet that has been installed on the bathroom ceiling. Thankfully, Jones, who does expert work playing it straight in this segment, gets to do something other than lean on her hilarious, but overused, expressions of disgust. In another sketch, Bennett and Kyle Mooney play squabbling brothers, clad in Looney Tunes T-shirts and tighty-whities. Their rough physical gags and shouty delivery already felt like a nod to classic Chris Farley characters, even before Mooney was launched through a wall. At the end, Schreiber, as their father, tells the brothers to kiss and make up. The whole scene is supposed to offend a couple, played by Thompson and Aidy Bryant, who are visiting their house, but only Schreiber holds it together and remains stern. The façade weakens. The humor breaks through. Everyone else can’t help but laugh.

The Photo Book That Captured How the Soviet Regime Made the...

Which lawmakers got the most NRA money?