Home Culture Pour One Out for Tyler Perry’s Madea | 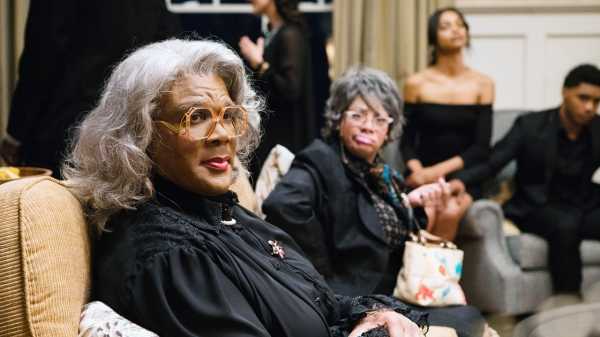 Creators, with their special hubris, are at constant risk of being swallowed by the act of creation; they give their inventions fabulous power and, in the process, lose control of them. Has any contemporary commercial artist learned this lesson quite like Tyler Perry? His most famous character, the brusque grandmother Madea, packs an assault rifle and a Glock. She pulls the pistol out of her purse as effortlessly as sane old ladies produce those awful strawberry bonbons. In nearly a dozen stage plays, and in as many movies, Madea has taken aim at no-good freeloaders and goody-goody authorities, all while spreading a hard-headed traditionalism herself. But no one has stared down the barrel of her cultural menace more often than Perry himself. Since 1999, when he first débuted Madea, in the theatre piece “I Can Do Bad All By Myself,” Perry has played his own matriarch, wearing a gray press-and-curl wig and a muumuu and covering his six-foot-five frame with a stuffed suit. Perry is Madea, but, in a sense, it’s Madea who owns Perry.

He’s thought about killing her for at least a decade. For one thing, the suit is heavy and the makeup is smothering. Now he’s about to turn fifty, and has a child and a girlfriend offscreen; he will probably one day be Hollywood’s first black male billionaire. As a dramatic actor, in thrillers like “Alex Cross,” and “Gone Girl,” Perry is capable of barrel-chested valor (though it would have been nearly impossible for anyone to summon gravitas as Colin Powell in Adam McKay’s “Vice,” given the hollow script, and the fact that Perry’s chin quiver calls to mind Madea’s neck roll did him no extra favors).

Perry did nearly “off” Madea once, in “Boo 2! A Madea Halloween,” a couple of years ago, but, like a zombie or like Jesus, whom she so merrily misquotes, she rose again. “It’s time for me to kill that old bitch,” Perry told the radio host Bevy Smith, last fall. “A Madea Family Funeral,” which was released earlier this month, is, according to Perry, the last Madea movie. Even so, he couldn’t bring himself to fully destroy his creation. On the movie’s poster, she lounges on a coffin that belongs to someone else, praise hands up.

The torment of Perry’s mommy drag is charmingly Freudian. In his Madea films, Perry also plays a lawyerly version of himself, named Brian, a nephew of Madea’s who, with terrorized obedience, chauffeurs her around town after a judge suspends her license. Perry has explained that he based Madea, in part, on his own aunts and his beloved mother, who raised her son with a moral stringency that countered the moral deficiency of his father, who was abusive. (After his mother’s death, Perry learned that she had lied to him, and that his biological father was someone else.) Set the autobiographical inspiration aside, though, and you’ll notice that Madea bears little resemblance to older black women in the real world. She smokes weed, curses, and spits. She self-identifies as a thug. She could steal your man and your wallet. Her religiosity is unorthodox—she interprets the Bible’s “Peace, be still,” to reference the “piece o’ steel” she keeps in her purse. Her Southern accent—“Hallelujer!” “Praise da Lort!” “Hellur!”—is not one found in nature.

Mabel (Madea) Simmons is a laugh-track mommie dearest, a vulgar mammy whose charges aren’t wet white babies but wayward black young adults. She hails from a dubious performance tradition that started in minstrel theatres, in the nineteenth century, and, since the nineteen-eighties, has been floridly revived by black male comedians doing intra-racial pseudo-drag. The difference between Perry’s Madea and Martin Lawrence’s Big Momma or Eddie Murphy’s Anna Klump is that Madea plays the role of the pragmatic moralist in Perry’s cosmos; the Madea movies are mouthy morality plays for the entertainment of black women. Perry’s secondary female characters are either professionally and romantically insecure, falling for dark-skinned mogul-tyrants, as in “Diary of a Mad Black Woman,” or they’re too stubborn to submit to hard-working, light-skinned brothers, as in “Madea’s Family Reunion.” Madea presides over the domestic turmoil of her various nieces, neighbors, and foster daughters, pinching their ears and swatting their behinds until all the family trauma is exorcised and replaced with strong-willed common sense. Cicely Tyson or Maya Angelou might even make a cameo, to firm up the feeling of ancestral dignity.

Perry’s movies and television shows are formulaic and clichéd, yet they have achieved enormous success. White critics don’t like them, but their reviews are polite pans, not referendums on Perry’s soul. (As Hilton Als wrote, in a New Yorker piece on Perry in 2010, “No white critic wants to tell a black man what he can or cannot say about his own society.”) For black critics, more is at stake. For years, the reaction was uniform hostility toward Perry’s embrace of melodrama and stereotype. In 2009, Spike Lee called Perry’s sitcoms “Meet the Browns” and “House of Payne” “coonery and buffoonery.” In a profile of Perry for New York magazine, in 2015, Rembert Browne wrote that the negative feelings toward the director “aren’t about his business sense, his ability to direct, or his acting chops—typically, they’re about him as a net loss for the black race.”

Over time, though, the wholesale critical rejection of Perry has softened into a begrudging acceptance, and perhaps even a cringing love. When “Boo! A Madea Halloween” came out, I received texts from friends, their tones hesitant, asking if we should go see it. “I did not expect to enjoy this show,” Browne wrote, of seeing a production of “Madea on the Run.” “But, after a few minutes, I slipped up and laughed.” I laugh at Perry movies a lot, too. When I was a kid, my mother would buy bootlegs of his plays and films by the pack, from a kindly hawker who would come by the salon where she got her hair done. Back then, my critical faculties were barely developed, and I hadn’t yet learned to distrust that which primitively pleased me. Movies were not mirrors. I hadn’t yet come to understand that there is a ghastly aura surrounding the activity of black consumption, shading the outré with a pallor of paranoia and pain.

At the time Spike Lee made his comments, Perry responded by accusing the auteur of bourgie condescension. “Spike Lee can go straight to hell,” he said, at a press conference for “Madea’s Big Happy Family.” Then he grew grandiose: “Booker T. Washington and W. E. B. DuBois went through the exact same thing. Langston Hughes said that Zora Neale Hurston, the woman who wrote “Their Eyes Were Watching God,” was a new version of the ‘darkie’ because she spoke in a Southern dialect and a Southern tone. And I’m sick of it from us; we don’t have to worry about anybody else trying to destroy us and take shots, because we do it to ourselves.” Perry had clearly lost all sense of proportion; “Madea Goes to Jail” is not as rich a text as Hurston’s “How it Feels to Be Colored Me.” (Although Perry’s artistic intent feels more guileless than chauvinistic, I’m not thrilled by the idea of girls watching his films without debriefs.) But I think that black women who are entertained by Perry, from his initial audience of churchgoers to younger, secular crowds, are not deriving their sense of personal esteem from his sermons. Lee later admitted just as much; in an interview with Oprah, who has long been a business partner and advocate of Perry’s, Lee said that he thought he might work with Perry one day. Perry’s pure eschewal of white opinion, and his Trojan-horsing of black talent, is admirable. While white Hollywood was underselling the skills of Lynn Whitfield, Viola Davis, Taraji P. Henson, and Gabrielle Union, Perry was giving these performers platforms. Madea is stupid, but her stupidity is comfortably numbing, an anesthetic injected into the part of my brain that demands the impossible of black women onscreen.

To mark her retirement, Perry is taking Madea on a countrywide farewell stage tour. Beyoncé and Jay-Z went to one of the performances. I can’t, in good conscience, recommend “A Madea Family Funeral” or subject it to the pressure of critical analysis. The plot is that Madea and her posse of horny senior citizens (including Perry as Madea’s brother Joe and a wheelchair-bound war veteran named Heathrow) walk in on a commotion in a hotel room. On the day of his wedding anniversary, a relative of Madea’s had scheduled a tryst with his dominatrix mistress, and then lost consciousness during the act. The sight of leather-bound breasts, Joe suggests, has stunned him into a heart attack; the creepy mortician demonstrates to the family that the corpse’s lingering erection prevents the casket from staying shut. In typical Perry fashion, Madea, who guards the infidelity from the widow, says one wise thing: “Folk get mad at you when you tell them something about they husband.” The widow, in a teary sequence, reveals that her husband emotionally abused her, and that she’s happy that he’s dead. Then she toodle-loos off to Vegas, her overnight “ho bag” in hand, and her new beau, played by Mike Tyson, waiting outside in a car. This apparent slackening of Perry’s conservatism is perhaps the surest sign that Madea’s work here is done. Her reign was ridiculous, and it was ours.

US Charges Chinese National With Trying to Smuggle Cancer Research From...

Did He? Twitter Debating Over Whether Trump Believes Operation ‘Desert Storm’...