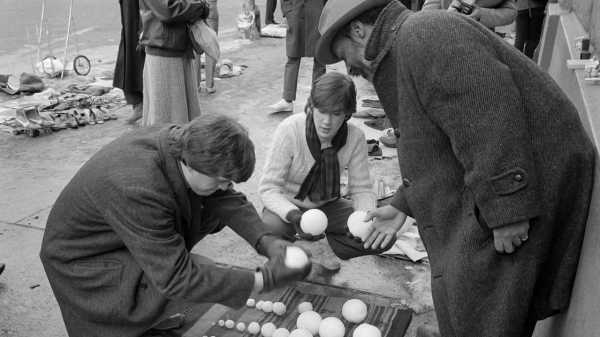 Avant-garde art has a green thumb. In the nineteen-eighties, the German artist Joseph Beuys planted seven thousand oak trees in Kassel, as part of the grand vision that he called “social sculpture.” For the past decade, the Brazilian conceptualist Maria Thereza Alves has been cultivating gardens in port cities around the world, including New York, from dormant seeds extracted from ballast. So visitors to the Frieze Art Fair (on Randall’s Island through Sunday) can be forgiven for assuming that the earth-filled trays of turnip sprouts on display in the booth labelled Project EATS is an agricultural art work like those of Beuys or Alves. The truth is even more interesting.

Project EATS is a nonprofit organization that has developed seventeen urban farms in working-class and low-income neighborhoods around New York City; two more will arrive later this year, on rooftops in the Lower Side and the Bronx. One farm—fruit orchard, berry patch, vegetable fields—is not far from Frieze’s white tent, on the adjacent Wards Island. It operates in partnership with a men’s shelter. What are these agrarian crusaders doing at an art fair, right next to a booth manned by the megadealer Hauser & Wirth? The group was founded, in 2008, by Linda Goode Bryant, who also ran the legendary gallery dedicated to the work of emerging black artists, JAM (Just Above Midtown), which opened on West Fifty-seventh Street in 1974 and closed in 1986. In her mind, as she put it in a recent interview, “Art is essential as air, and water, and food. It is for our soul. That thing that connects us universally and reminds us what we’re responsible for—the world, that we need to live in.”

This year the fair has a special section dedicated to Goode Bryant and the gallery’s legacy. A black woman who grew up in Ohio, she founded JAM when she was just twenty-five. The single mother of two young children, she had moved to New York to study art history and left the security of a job at the Studio Museum in Harlem (she had also worked at the Met) to pursue her dream, which turned out to be a visionary one. Among the artists whose early careers flourished at JAM are such major figures as David Hammons and Lorna Simpson. In the JAM section of Frieze, Simpson presents a winsome selection of small works on paper, a corollary to the artist’s inky, big paintings now on view at Hauser & Wirth’s mainstay gallery, in Chelsea.

Other highlights at the fair include Dawoud Bey’s photographs of David Hammons’s legendary snowball sale in lower Manhattan, in a booth shared by Rena Bransten, of San Francisco, and Stephen Daiter, of Chicago; a stately array of abstract paintings by Norman Lewis from Michael Rosenfeld; and the dynamic photographs of Ming Smith, presented by Jenkins Johnson, which won the fair’s prestigious Stand Prize. Smith’s otherworldly portrait of Sun Ra alone is worth the ferry ride to Randall’s Island. If you can’t make it to Frieze, mark your calendars for the fall of 2022: this week, MOMA announced its plans for an ambitious show dedicated to JAM.