Home Culture “Public Official A,” Reviewed: The Sins of Rod Blagojevich Are the Sins... 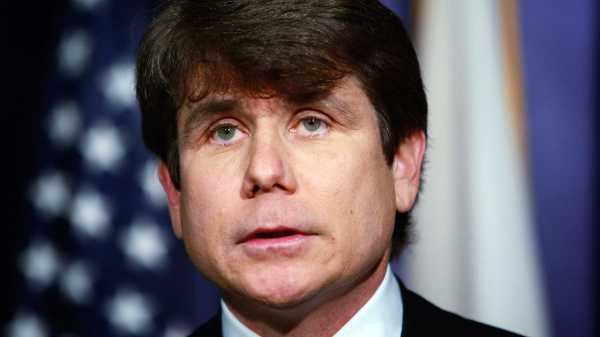 Before there was Individual 1, there was, a decade ago, Public Official A—the swoop-coiffed, boisterously ridiculous Illinois governor Rod Blagojevich, who, we recall, had “this thing” that was “fucking golden”—Barack Obama’s former Senate seat—and wasn’t going to just give it up “for fucking nothing.” Blagojevich, a Democrat, was arrested on corruption charges, in December, 2008; removed from office, in January, 2009; tried on some two dozen felony counts; convicted of more than a dozen; and sentenced to fourteen years in prison, where he remains. Like Individual 1, Blagojevich makes an impression. Between his arrest and his trial, in an effort to garner money, support, and a few more minutes in the sunshine of public attention, Blagojevich tried to star on the show “I’m a Celebrity . . . Get Me Out of Here!” (his wife, Patti, took the role instead, and gamely ate a tarantula alongside Lou Diamond Phillips); claimed to be “blacker than Barack Obama”; wrote a self-pitying memoir; and appeared on “Celebrity Apprentice,” where Donald Trump praised and fired him. In recent months, Trump has floated the idea of commuting Blagojevich’s sentence. There is a Democrat, it seems, he’s open to working with.

The new podcast “Public Official A,” from WBEZ Chicago, revisits the Blagojevich saga—F.B.I. agents, no-bid jobs, wiretaps, show biz, and all. When Blago’s downfall was happening, during the beginning of the Obama Presidency, it seemed like an amusing trifle, a silly sideshow you’d hear about and laugh off. Now, like so many political scandals of the past, it seems like a clue that might help decode the eternally baffling present. Several popular Trump-era podcasts, including “Slow Burn,” about Watergate and the Clinton impeachment, and “Bag Man,” Rachel Maddow’s deep dive on Spiro Agnew, have offered perspective on our current family of political scandals—or a vacation from them. The story told in “Public Official A” has more explicit connections to Trump—“Celebrity Apprentice,” the possible commutation, the presence of Robert Mueller—and thematic ones. Each man sees himself as a victim, despite having engaged in the baldest and grubbiest of self-dealing; each is a self-styled populist who uses TV and blunt talk to captivate the public; each of their stories has the surface appeal of sleazy comedy but the substance of tragedy. The clown distracts us from the criminal.

In Blagojevich, in other words, “Public Official A” has this thing that is fucking golden. So what, we wonder, will it do with it? WBEZ, long a cornerstone of American public radio, has recently produced excellent Chicago-focussed biographical podcasts of national interest, including “Making Oprah” and “Making Obama,” whose producer, Colin McNulty, also produced this show. As it begins, “Public Official A” is as vivid as you’d expect but a bit less sharp.

“I want to talk, kind of like, the tick-tock of all of this,” the host, Dave McKinney, a state-politics reporter at WBEZ, says at the outset. McKinney, a longtime journalist, who covered the Blagojevich story for the Chicago Sun-Times, is with two F.B.I. agents, Patrick Murphy and Daniel Cain. They’re recalling a 5 A.M. meeting at the Golden Nugget Pancake House, in December, 2008, with their then boss, Special Agent Robert Grant. It’s a scene with great potential—F.B.I. agents at a diner, planning out details before they arrest the governor. But it doesn’t exactly tick-tock. “That day is so important,” McKinney continues. “Can you recall the level of nervousness you maybe both felt?” Murphy says pleasantly that he thinks he might have had “some nerves”; Cain says they were pretty well prepared. McKinney keeps asking baggy, scene-setting questions—Were they eating? Drinking coffee?—that yield more ho-hum responses. There’s a baffling amount of this kind of thing throughout the podcast. The pace picks up when Grant describes sketching the layout of the governor’s property on a napkin, and seventies-cop-show music starts playing quietly in the background. (The show’s theme song is fun, too, jauntily evoking “Stray Cat Strut” and a mood of naughty sneakiness.) But narrative unease returns when, suddenly, we’re inside Blagojevich’s house, having a sympathetic conversation with Patti.

“The morning of December 9, 2008—how does your family look at that day when the calendar, it’s December 9—is it something you just ignore or something you think about?” McKinney asks Patti. She tries to ignore it, she says. “I mean, this is painful,” he says. “I know it is, and I know you’ve probably lived through it a number of times. But you and Rod are here, and I don’t know if you’re awake yet by that point when the doorbell rings, but what—” The phone rang, she says. “Is this in your bedroom, or?” Yeah, upstairs. And so on. I had an almost physical urge to edit it. The scene is interesting but low stakes: Blagojevich was peacefully arrested for crimes that he committed, and he was later convicted, on copious evidence, in a fair trial. Painstaking extraction of each detail, including the emotions of F.B.I. agents calmly doing what they should and of a wife who resents her husband’s just prosecution, feels belabored and inessential.

Beyond that, it’s disorienting to hear McKinney empathize with Patti Blagojevich. What’s helpful for the interview process isn’t always helpful for us to hear. There’s little evidence of McKinney challenging her aggrieved perspective or pressing her for things that shed light on Rod’s crimes or character. When he finally asks her why Blagojevich hasn’t “come around to accepting guilt,” she says, “Why would you resign yourself to that if you know, in your heart, that you’re not guilty?” McKinney gently says “yeah” and leaves it at that.

The sections that focus on corruption, show biz, and Trumpworld are much stronger, especially in the second episode, which comes out on February 1st. The show skillfully reminds us that Blagojevich’s TV appearances a decade ago were meant to curry favor with the public—a fact that Trump himself remarked on, in his inimitable, racially gross way. In a “Celebrity Apprentice” clip, Trump speculates that Blagojevich doesn’t want to show anger toward a black teammate “because, frankly, there may be some black jurors” in his upcoming trial. But it’s clear that Trump likes Blagojevich. “Governor, you have a hell of a lot of guts,” he says. “I have friends where things have happened to ’em, they crawl into a corner, they die. You’re out there punching, so I respect that.” Blagojevich’s efforts in a 3-D display for the Wizarding World of Harry Potter challenge were subpar, so Trump fired him, with fond regrets. This section feels like yet more grim evidence that Trump admires people because they’re criminals.

Today, the Blagojeviches have exhausted their appeals options; a pardon or commutation from Trump is their best bet. The podcast handles this unnerving plot point deftly, too. “Our fate is in one person’s hands,” Patti says. “I don’t know the President. But I do know he watches Fox.” We learn that, in at least five appearances on Fox News, from Tucker Carlson’s show to Judge Jeanine’s, she’s appealed to Trump’s kindness and compassion—in essence, eating another tarantula—and also to his anger. In fact, her angry words could almost be his. “They make up crimes where there are none,” she says on Fox. “And they, you know, make a big splash in the press just to try to bring down people that are either controversial or people that they just don’t like.” Flattering Trump on Fox News: it’s a solid strategy.

Episode 2 delves into Blagojevich’s origins and the patronage embedded in Chicago politics, offering fascinating, depressing perspective, and I assume that subsequent episodes will continue in that vein. If you’re interested in or amused by Blagojevich, the podcast is well worth listening to. But I found myself wishing that “Public Official A,” which begs comparison to “Slow Burn,” had taken more of a cue from that show, which is excellently written, respectfully presumes an intelligent listenership, and shows as much as it tells. McKinney’s narration can be obvious, and his presence often calls attention to itself: those abundant effortful questions that yield pallid results; humbly proud descriptions of his own scoops; several amused mentions of the role of an informant’s bra in a sting operation. The show can feel at odds with itself, but its strengths generally overcome weaknesses. Just before McKinney fails to press Patti on the issue of her husband accepting his guilt, mm-hmming along with her resentment, a clip of Grant, the former F.B.I. special agent, on the subject of whether we should pity the Blagojevich family’s fate, provides the clarity we crave. “I mean, there’s many people in prison that have families,” Grant says. “Maybe Patti should look more at the behavior of her husband and say, ‘You know, we’re in this situation because of what you did.’ ”

US panel recommends new adult vaccine against hepatitis B

Five things we learned from this weekend’s Premier League games