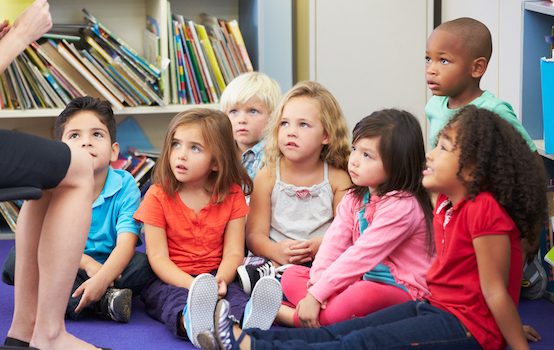 On June 14, the school board of Fairfax County Public Schools (FCPS), the tenth largest school division in the United States, will convene and likely approve a number of changes to its sex-ed program, including replacing the term “biological sex” with “sex assigned at birth,” teaching that children aren’t born male or female, minimizing the role of abstinence, and excising clergy from a list of “trusted adults.” Although I am a product of FCPS, as was my mother and a long list of aunts, uncles, and cousins on both sides of my family, my children will not be attending their local elementary school. The radical sexual pedagogy promoted by FCPS, coupled with its well-publicized laxity in confronting illegal sexual behavior by its staff, has convinced me that my eldest daughter, who will enter kindergarten this fall, would be safer in a private school.

Still, the committee’s recommendation to remove clergy from the list of “trusted adults” is ridiculous, given that FCPS has been dogged by illegal sexual activity by its employees for years. In March, a Sandburg Middle School teacher was charged with possession of child pornography. Last year, a former girls’ basketball coach at Lake Braddock Secondary School was accused of sexually harassing players—the school administration kept him on staff for months after the allegation was raised. A 2016 investigation by the local News4 I-Team discovered that the response of FCPS to multiple teachers accused of sexual misconduct—with students, no less—had allowed those educators to keep their teaching licenses for years after the offenses. A Bailey’s Elementary School teacher was arrested in 2015 and charged with sexually assaulting a teenage boy between 2004 and 2010.

FCPS has repeatedly demonstrated its lack of responsibility with our children, maintaining a policy towards sex offenders more relaxed than my local Catholic diocesan schools, while introducing children to sexual practices fraught with health dangers. Why should I trust a school system that perpetuates the demonstrably false narrative that public school educators are more trustworthy than priests, pastors, or rabbis? It’s bad enough that one day my children may attend colleges that permit, if not encourage, the kinds of risky sexual behavior depicted in Jon Krakauer’s 2015 best-selling book Missoula. Without a proper education, they’ll lack the maturity to navigate these treacherous waters as 12- and 13-year-olds, let alone as college freshman. As Cicero warned, “the enemy is within the gates; it is with our own luxury, our own folly, our own criminality that we have to contend.”

I suppose I’m not terribly surprised by the increased abasement of the school district that educated me. When I was in tenth grade, a ninth grader at my school attended a party where she got drunk and was persuaded into a compromising position by upperclassmen. Those boys (who to my knowledge were never punished) took pictures and sent them to a popular local radio host, “Elliot in the Morning,” who spoke about them on-air. The girl was, of course, humiliated and ended up transferring schools. I think she even changed her name. (As an aside, how has that DC101 disc jockey avoided legal scrutiny? He spoke publicly about viewing what amounts to child pornography!) We’ve certainly come a long way since 1999. With handheld, Internet-accessible phones now ubiquitous among our children, how could things not descend into even more alarming harassment, abuse, and misogyny?

FCPS still boasts an impressive educational pedigree. As their website notes, the class of 2018 has 223 National Merit Semifinalists, and Fairfax County high schools are recognized annually by the Washington Post as some of the most challenging in the United States. Yet as C.S. Lewis warned, “education without values, as useful as it is, seems rather to make man a more clever devil.” Teaching kids just entering puberty about how to “properly” use contraception and engage in safe anal sex can only be classified as a first-rate education in delinquency. Most American public schools have lost sight of Aristotle’s important maxim: “The happy life is regarded as a life in conformity with virtue…not spent in [sexual] amusement.”

Excluding my children from a public education is a hard decision for me, as I would think it is for many families—these are the institutions that have inculcated American ideas and ideals for generations of our citizens. I spent every year of grade school except kindergarten in the same public school district, which had an indelible impact on my socialization into our culture as well as on how I think and view the world. Public school districts also continue to employ huge numbers of our citizens: FCPS is the third largest employer in the state of Virginia. My mother spent more than 30 years in the system as an occupational therapist, from which she herself graduated in 1972. I was so inspired by my public education experience that I worked as a substitute and then a full-time high school history teacher, as well as a high school tennis coach.

Though I am a product of public schools and still take pride in my education, I won’t send my kids there—not as long as I can afford to send them elsewhere. Given the Catholic Church’s robust security policies in the wake of the early 2000s sex scandal, my kids are safer in my parish’s elementary school. My decision will stand until our public school systems—enduring what has become a nationwide sexual crisis—adopt policies that resist, rather than capitulate to, the worrying trends wreaking havoc on our families and our children.

Casey Chalk is a student at the Notre Dame Graduate School of Theology at Christendom College.

Hamilton and Bottas will be warned with red cards if relationship...

The first-ever picture of a black hole may be unveiled Wednesday....