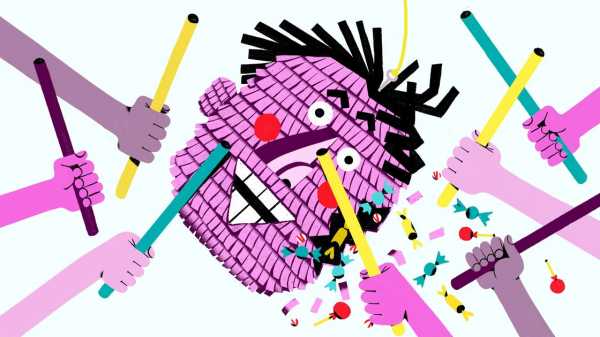 On a recent episode of the Bravo reality series “Vanderpump Rules,” the West Hollywood bartenders and waitresses whose drama-filled lives are the focus of the show go on vacation in sun-dappled Puerto Vallarta. During a day trip to a local waterfall, a waitress named Scheana poses suggestively in her swimsuit for an Instagram Story and messages it to Adam, a barback she has been sleeping with. Though she claims to be seeing Adam only casually, Scheana has very particular expectations when she sends the picture. “Like this photo or I will cut you,” she tells the camera. When Adam fails to respond, she is incensed at his silence. “I’m not gonna send you photos if you don’t tell me I’m hot,” she explains to her friend Kristen indignantly.

Though we might not all express our desires as bluntly as Scheana does, most of us know that social media is governed by an implicit etiquette. We realize that other people post pictures—especially selfies—in a bid for validation, and that being a friend, a potential or current lover, or even an enemy attempting to lull her foe into complacency means responding with a positive comment, or an appropriate emoji, or, at the very least, a like. Naturally, we expect our own posts to garner the same kind of appreciation. Withholding such a reaction is not unlike a breach of contract. “Acknowledge it,” Scheana cries at one point. “Fire emoji. Double-tap heart. It’s not that hard.”

An Instagram strike action like Adam’s is unpleasant enough, but what happens when a bad reply arrives? I’ve occasionally received negative comments on my social-media posts—mostly from anonymous trolls, in reaction to pieces I’ve written—and, though I know that most female writers have experienced the same or worse, it is nonetheless shocking to be called stupid or ugly in response to a tweet or an Instagram picture. Apparently, however, some people seek out just such a response. Not long ago, a friend introduced me to a discussion forum on the Web site Reddit called r/RoastMe. The idea behind the community, which has almost one and a half million members, is simple, as are its ground rules, which are laid out in a sidebar to the right of the feed. Users over eighteen can upload unretouched pictures of themselves, taken while they hold a piece of paper on which they have written “r/RoastMe.” With this act, they announce their consent to be roasted—humorously mocked—by fellow-users. As in other forums, also called subreddits or subs, the most popular roasts, based on users’ “upvotes,” rise to the top of the thread.

In a piece last year, my colleague Andrew Marantz explained that Reddit’s professed emphasis on free speech has historically made it a fertile ground for trolls trucking in bigotry and vulgarity—an effect that the site officially deplores but has had limited success curbing, and, in fact, arguably thrives on. Reddit is one of the Internet’s most popular Web sites, with more than a million subreddits; many are relatively wholesome communities where users discuss food, cars, or TV shows. But the general vibe, especially to the uninitiated, is chaotic, even frightening. With its bare-bones, Web 1.0 aesthetic and its masses of anonymous users—with names such as u/shreddedkittentacos and u/BulletTurd—populating subreddits like r/ImGoingToHellForThis and r/misogyny, Reddit feels like the bowels of the Internet. The few times I’ve explored it, I’ve done so at my own peril, peeking through my proverbial fingers as I scrolled. To look at Reddit, as Marantz noted, is to ask what happens if, “after technology allows us to reveal our inner voices, what we learn is that many of us are authentically toxic.”

In many ways, the tone of RoastMe remains in keeping with the vulgar nastiness that is generally found on Reddit. The posters are mostly young, from a variety of ethnicities and races. They are predominantly men (and, based on their usernames, many of them appear to belong to the gamer-adjacent demographic), but there is a female contingent, too. The jokes are often more callous than funny, and frequently trade in racism and sexism. To a picture of a bearded young man asking to be roasted with the words “If someone is going to call me ugly, at least let it be funny,” one user comments, “This goat is overdue for a shave,” while another suggests, “At least the testosterone treatments seem to be working.” In response to a hippieish fellow’s picture, a user writes, “You look like the dad who would get your daughter’s friends high.” Under a photo of a sweet-looking girl introducing herself with the words “I’m 18 and have body dysmorphia. Give me your best shot,” a user writes, “It’s not dysmorphia if you’re right.”

Though it might seem to be just another place for angry trolls to encounter potential victims, RoastMe is something a bit stranger. Within the hall of mirrors that polite society creates and that most social media amplifies, the subreddit provides a safe space in which one might receive a response to that ur-question: What do people really think of me? Posters’ continued demands to hear the truth about themselves (a sampling: “Don’t hold back”; “Do your worst”; “Please be brutal”; “Make me cry”; “Roast me on a skewer like a burnt turkey”) suggest a desire to draft a different kind of contract for online relationships. In this new scenario, you might get hurt, but at least you’ll get some clarifying honesty.

As I scrolled through RoastMe, it occurred to me that the preoccupation it reveals might be a newer iteration of a very American tendency that Tom Wolfe identified—in 1976, in a New York magazine essay about the country’s increasingly zealous individualism—as “dwelling upon Me and every delicious nuance of my conduct and personality.” Wolfe described so-called lemon sessions, a popular form of social hazing at prep schools and Ivy League colleges in the nineteen-forties and fifties, and marathon encounters, rituals that were practiced in New Age retreat centers like the Esalen Institute and in Erhard Seminars Training courses in the sixties and seventies. In both types of meetings, participants engaged with one another for many hours, supposedly in complete honesty, and were “encouraged to bare their own souls and to strip away one another’s defensive facades.” Sobbing, accusations, profanity, shocking admissions—nothing was off limits, save for physical assault. The upshot of these ego-smashing experiments, Wolfe wrote, was a kind of narcissistic boost; no matter how badly a participant was torn down by her peers, at least she got to put “Me up on stage in front of a live audience.”

On RoastMe, posters are indeed sometimes called out for their covert desire to attract attention. (Considering Reddit’s angry-young-man feel, the fact that criticized users are often female should come as no surprise. “Posting thirst traps online to validate your ego,” one user gripes, in a typically jeering response to a young woman’s post.) But there are also moments in the community in which harsh assessment yields to a very nearly sweet dialogue. A “dental student and waitress” who “just got cheated on,” going by the name of u/throwawayquestion22i, asks to be roasted, and receives some nasty comments about the perceived greasiness of her face: “2 words. Noxema pads,” the commenter u/TheAugurOfDunlain writes. But when throwawayquestion22i responds, “Might actually take this as advice. Literally washed my face before this picture. My face oils hold no bounds,” TheAugurOfDunlain answers, with some kindness, “I’ll admit, they did wonders for me in high school.” Another user, u/Eight_Six_Salt, posts a picture in which he is wearing a wool cap, and demands redditors to “roast the fuck out of me and make me feel something for once.” Among some mean comments from a number of users, u/Pizza4Fromages strikes with “We can tell you are balding based on the way you wear a hat indoors.” When Eight_Six_Salt sportingly responds, “I am balding! Omg I love this sub so much,” Pizza4Fromages answers, “Lol I assume that about anyone who is wearing a beanie,” before adding, helpfully, “But the thing is, doing that destroys your hairline even more.”

These dribs of honest care are not insignificant, though for some they may prove cold comfort. There is still something disturbing about the vision of the world that RoastMe proposes: a “Fight Club”–style, masculinist belief that, if we interrupt the feedback loop of our late-capitalist everyday lives by hitting one another as hard as we can, we’d finally be able to engage truly. I thought about whether I’d be able to post my own picture on r/RoastMe, and determined that I would never be brave enough. Like Scheana from “Vanderpump Rules,” I realized, I’d rather not know what people really think of me. There is some tedium in knowing what to expect from one’s social-media feed, but there’s also succor.

Can Democrats running for president save a journalism industry in crisis?

US Carries Out ‘Defensive Strikes’ Against Five Shia Militia Facilities in...

Cora Staunton needs surgery for her fourth broken nose, but will...

Pakistan Super League set to be bigger and better in 2018