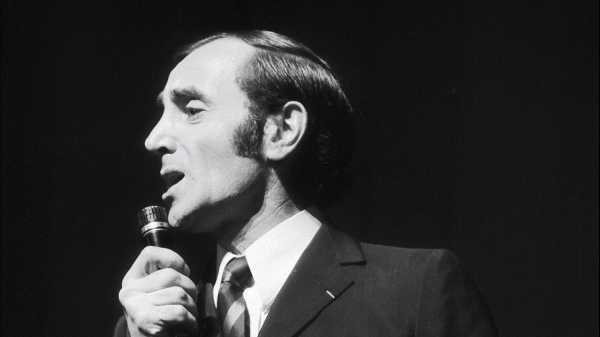 On October 1st, Charles Aznavour, the world’s last and greatest troubadour, was found dead in the bath at his home in the small village of Mouriès, in southern France. He was ninety-four. Aznavour’s career spanned nearly eighty years, at least a thousand songs, three hundred albums, dozens of tours, and many, many films. His music, animated by an earthy interest in what addles and excites the common man, had a revolutionizing impact on French pop, extending its lifetime well past its mid-century golden age, and its influence well beyond the borders of Aznavour’s nation.

Logically, his death should not have been a shock. Age must do its ravishing, even to those who have acquired the sheen of the immortal. Yet Aznavour really did seem to possess some counterforce. Since 2006, he had been on an on-and-off global farewell tour. As his hearing went and his vision deteriorated, the nonagenarian simply got hearing aids and a teleprompter. After breaking his arm in May, he healed up and had his last performance, in Osaka, in September. At the time of his death, Aznavour was planning a ninety-fifth-birthday tour, and expressed a desire to perform in a centennial concert, on May 22, 2024. The artist’s nature was one of warm Gallic self-deprecation, but on the subject of living and working long he could be gravely serious. “But why would I ever stop?” he told the Daily Telegraph this spring. “In order to die at home in an armchair? Non merci.”

Aznavour was born Shahnour Aznavourian, in Paris, in 1924, to parents who had escaped the Armenian genocide in Turkey. Back home, his father, Misha, had been a singer, and his mother, Knar, an actress. Bouncing around Paris’s quartier latin, Misha became Michael, the owner of a Georgian restaurant, and Knar, a seamstress. Although displaced, Misha and Knar resisted the obliterating effects of assimilation. Charles and his sister, Aida, were taught Armenian language and folklore. Both parents held onto their love of popular theatre, staging lively performances in the family home. They transferred these passions to the next generation, along with a prideful melancholy that their children might never know the home country. “I have that tragedy in my blood,” Aznavour once said. The Depression came, and Aznavour pére lost the restaurant. Eventually, Charles dropped out of school and did his part to support the family by hawking bric-a-brac on the street.

He also attended a local acting school and joined theatre troupes, where he was cast in roles that fit his age and distinctly ethnic appearance. The musician and musicologist Franz Nicolay wrote in The Paris Review that during the Second World War, Aznavour was mistaken by the Germans for being Jewish, and that, “more than once, he had to produce his uncircumcised penis as proof” that he was not. (Later in life, with a characteristic nonchalance, and an instinctive humanity, Aznavour revealed that his family had sheltered Jewish people at their home in the nineteen-forties.)

In the late forties, Aznavour was scraping up a living as a singer in Parisian night clubs and cabarets. Word of a diminutive tenor who could make hearts break reached the singer Édith Piaf. She pulled Aznavour under her wing, taking him to North America in 1948, where he opened for her in New York and Montreal, in addition to running her errands and tending to her not-at-all infrequent swoons. (Aznavour denies that the two were ever lovers; he has called their relationship “une amitié amoureuse,” a romantic friendship, or, as he elaborated, “more than friendship and less than love.”) The love that the mentor had for her pupil was a harsh one. Prone to costume and to aggrandizing mythologies of the self, Piaf, who was of Berber ancestry, believed that Aznavour, who stood at only five feet three inches, would not be successful so long as he looked the way he did: foreign, undergrown. Piaf commanded Aznavour to get a nose job, and he did. “I preferred you before,” Aznavour remembers Piaf saying afterward.

But the mark of his origins could not be so easily chiselled away. Aznavour, whose name has become synonymous with his country’s cultural character—who was called one of the enduring “faces of France” by Macron at his state funeral, earlier this month—was initially reviled. Critics called him ugly; his voice, unrefined; and his lyrics, vulgar. (“One wrote ‘Why have they let a cripple onstage?’ ” Aznavour told the Daily Mail in 2015.) As a modern troubadour, mining the social perspective of the chansons réalistes, Aznavour was the inheritor of a French tradition that can be traced back to the entertainment of the medieval jongleur. But, in modern France, Aznavour quickly came to represent the threat of the uneducated, the immigrant, and the unpalatably ribald. Aznavour piqued the love song and made it dangerous; what he wrote were often tributes not to love but to lust. His song, “Après l’amour,” from 1955, about the postcoital glow—the genitals, heavy; the sheets, twisted—was banned from the radio by the French government.

In 2003, Aznavour wrote, with “La Critique,” what is perhaps the most valiant ode to eviscerating critics that has ever been put to song: “You chose your camp, you have to admit / that their choice is to be, even if they are wrong / the one that informs, even if they deform / your thoughts, to each their ways and their skills, to each, their job.” It is tempting to read this as gloriously petty and purely autobiographical. But Aznavour always denied that the dramas of his own life were his creative font. What distinguished his music was a devastating investment in the anonymous ghosts of his imagination, which looked and moved so much like the lovelorn, the exhilarated, the bohemians, and the depressed stalking the streets. He was different from peers like Serge Gainsbourg, who nurtured cults of personality. He was a character-singer, and an actor-songwriter, inventing personas with astonishing empathy.

A vaudeville show in Casablanca, in 1956, where the audience raved, has been identified as a turning point in Aznavour’s public favor. His popularity anticipated the sexual revolution and the lure of hipsterism, and Aznavour fashioned himself an unlikely sex symbol. Critics remarked on his magnetism, his off-kilter seductiveness. Watching Aznavour perform his “five hundred and eighth composition” for a select crowd at the Americana Hotel, in New York, in April of 1963, The New Yorker’s Lillian Ross observed that he was “small, and tightly put together, with enormous Armenian eyes and a dry little Existentialist face, but he has a strong voice.” “I am popular because I am like everybody in France,” Aznavour told Ross. France came to call him, endearingly, “Le pétit Charles.” In 1965, he released “His Love Songs in English.” Recalling seeing him perform at Carnegie Hall in “sixty-something,” Bob Dylan told Rolling Stone that Aznavour “blew my brains out.”

Aznavour’s best-known film role was in François Truffaut’s “Shoot the Piano Player,” which the French New Wave auteur had written with him in mind. Perhaps owing to an offhand comparison made by Pauline Kael in a review of the film, Aznavour is constantly referred to as “France’s Frank Sinatra.” It’s true that the two were both crooners who once duetted, and they were both short and enjoyed a well-tailored suit. But there was much that distinguished the Frenchman from the American. Aznavour was a self-consciously global pop star, singing in French, Russian, English, Armenian, Spanish, and German, while Sinatra represented the domination of the new American man. Sinatra’s signature song is “My Way,” and Aznavour’s is “She.” Can you imagine Sinatra performing a song of such stunning pathos as “Comme ils disent,” about a gay man who feels a tortuous freedom when he wears women’s clothing? Aznavour did, plaintively. He also wrote songs from the perspective of women, and for women, including Piaf, and his once lover, Liza Minnelli. “I’ve used the word ‘cellulite’ and ‘armpit’ in a song,” Aznavour once said. “I love the smell of your underarms,” Aznavour sings, his voice frailer than it was in his youth, in “Des ténèbres à la lumière,” released when he was ninety years old, on his final album, “Encores.” To compose it, he thought of a blind man’s sensuality.

“I am not a love god,” Aznavour said, toward the end of life. He was being playful but he was also thinking about legacy. Aznavour made a bevy of uncommonly beautiful, melodramatic ballads in the course of his career. But he was also a singer shaped from birth by the twentieth century’s major shifts: the advent of psychology and the raising of the ghetto. His sympathy was not reserved for the pitiable. Repression, to Aznavour, was the bane of naked expression. “Trousse Chemise” is a song written from the perspective of a young man reminiscing about the time he “overturned” a teen-aged girl, “in spite of your pleas to respect your body.” Should the brute sing? Aznavour was willing to find out. Late in life, he scored a musical about the life of the fin de siècle exhibitionistic painter Henri de Toulouse-Lautrec. “Lautrec painted a woman on a chamber pot. Art is art,” Aznavour said, in 2000. He was not interested in prettifying the erotic; he analyzed sex not as fantasy but as unvarnished truth.

Aznavour is survived by five of his children and his third wife of fifty years, Ulla. The world mourns him. The century was better for his genius and his compassion and his oblique, and at other times explicit, social politics. This was an artist who, in 1976, nearly a decade before the United Nations recognized the Armenian genocide, released, “Ils sont tombés,” or “They Fell.” The song is hymnal, talismanic. “Before Aznavour, despair was unpopular,” the French director Jean Cocteau once said. It is difficult to imagine popular music without his stark, and specular, existential insight.

What the Appointment of Max Hollein Means for the Met |