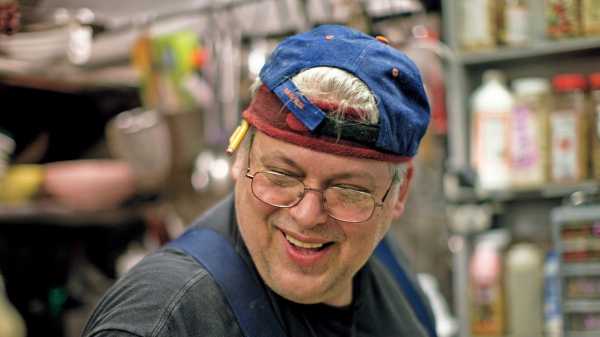 Kenny Shopsin, the chef-proprietor of Shopsin’s, the defiantly idiosyncratic general-store-cum-restaurant in the West Village and, later, the Lower East Side, was not the sort of person for whom death ever seemed a possibility. Cranky, nonconformist, uninhibited, seemingly driven by an internal engine of profane irascibility, he was a New York legend, part of the social architecture of the city, a wild-haired totem of a lower Manhattan that once was, before the degradation of Greenwich Village into a place of vacant luxury storefronts waiting to be reanimated by businesses able to pay five- or six-figure monthly rents. The news of Shopsin’s death, which spread like a rumor over Labor Day weekend, and was confirmed on Tuesday by his daughter Tamara, was like one of the legs being yanked off a chair. We’re still upright, but things are very wobbly.

From its opening as a corner grocery, in 1973, through its conversion to a restaurant, in 1982, Shopsin’s remained something of a New York City open secret. There was the dizzying menu that ran on its own cockeyed internal logic; the high likelihood that you’d hear profanity and insults raining out of the tiny kitchen; and the unwritten constitution of ironclad, terrifying house rules—no parties greater than four, no ordering the same thing as your neighbor, no dithering about what, out of the sadistic menu’s nearly one thousand options (several hundred of them egg-based, several hundred of them soup), you really wanted to eat. One of Shopsin’s regulars, from the early days, was The New Yorker’s Calvin Trillin, who wrote about the restaurant in the magazine twice: in 1975, when, respecting Kenny’s allergy to publicity, he referred to it as only “the Bubble Gum Store,” and again, in 2002, in a feature that catapulted Shopsin’s into the city’s culinary pantheon.

In many ways, Kenny Shopsin defied stereotypical notions of a corner-store proprietor. When he and his wife, Eve, who was also his business partner, first opened their shop, they were a young artistic couple. Shopsin’s father had been a successful businessman, and his brother was an architect. Kenny’s career path was more circuitous: after dropping out of college and trying his hand at a series of jobs, he ended up working as a building superintendent, where he met Eve, who lived on the same block. When the owner of their local corner store decided to sell off his business, the couple found themselves drawn to the idea of being in business together, and creating a space that reflected their community—with the bonus of a work commute of only a few dozen feet. It was also a place where Shopsin could do things exactly his way. “Ken did not feel philosophically or psychologically prepared to hold the kind of job that might traditionally be associated with his background,” Trillin wrote, in 1975. “He often says he has ‘a little trouble with authority.’ ” In 2002, he described a visit to Shopsin’s:

One evening, when the place was nearly full, I saw a party of four come in the door; a couple of them may have been wearing neckties, which wouldn’t have been a plus in a restaurant whose waitress used to wear a T-shirt that said “Die Yuppie Scum.” Kenny took a quick glance from the kitchen and said, “No, we’re closed.” After a brief try at appealing the decision, the party left, and the waitress pulled the security gate partway down to discourage other latecomers.

“They were nothing but strangers,” he said.

“I think those are usually called customers,” I said. “They come here, you give them food, they give you money. It’s known as the restaurant business.”

It’s rare for the owner of a neighborhood restaurant—even in a neighborhood as legendary and writer-filled as Greenwich Village—to achieve the sort of fame that Kenny achieved. In 2004, Kenny was the subject of the documentary “I Like Killing Flies,” which premièred at the Sundance Film Festival. Shot in 2002 and 2003, it chronicled the final year that Shopsin’s General Store spent in the space, on the corner of Morton and Bedford Streets, that Kenny and Eve had occupied for more than three decades, after a new landlord demanded rent beyond the Shopsins’ reach. It was also, more pointedly, a live-action primer on Kenny’s jovially cranky anarcho-nihilism, a pastiche of lo-fi vignettes, each more quotable than the next. “It’s not that we have high standards,” he says of his commitment to making good food. “It’s that they’re gonna put it in their mouth.” On knowing your worth: “The first duty of everybody in life is to realize that they’re a piece of shit.” On existential angst: “Pick an arbitrary, stupid goal, become totally involved in it, and pursue it with vigor, and what happens to you in that pursuit is your life.”

After a few years in the new spot, on Carmine Street, a few blocks away from the original Shopsin’s, the restaurant relocated a second time, in 2006, to a cramped stall inside the labyrinthine Essex Street Market, on the Lower East Side. Despite its out-of-the-way-ness and erratic hours, tourists and gawkers would show up in droves. Kenny presided with only the barest patience, sometimes sitting on a chair just outside the restaurant, sometimes in the tiny kitchen, slinging Blisters on My Sisters (a sort of riff on huevos rancheros), stuffed pancakes (macaroni and cheese, peanut butter, “post-moderns,” a.k.a. bits of other pancakes), Petes (fried eggs and various accessories atop garlic bread), and meal-size bowls of soup to the bodies that filled the shop. In 2008, Kenny released a cookbook, “Eat Me: The Food and Philosophy of Kenny Shopsin” (“One of the few advantages to owning a small business is that I can do whatever the hell I want, which means I can cook whatever the hell I want”), and, in 2017, his daughter Tamara published a memoir about growing up in the exuberant chaos of her parents’ store, and the crowds of diners grew ever denser.

Or so I’ve heard. I’ve made various plans to eat at Shopsin’s over the years, at all three of its locations. Friends who were regulars volunteered to accompany me there, to serve as a Virgil through the hells and heavens of Kenny’s kingdom. But each time I chickened out, intimidated by stories of patrons getting kicked to the curb for not looking like they’d “get it,” or storming out in a huff, mid-meal, after Kenny blessed them with a fabulously venomous insult, not understanding that the next move was to launch a retaliatory zinger of their own. In this, I’m part of an unfortunate fraternity: “It’s common to run into people who are afraid to enter the place,” Trillin wrote. But it’s not too late for us. Tamara Shopsin wrote on Instagram that the restaurant remains open for business as usual: “My dad won’t be there in body but he will be there.”

England’s route to the World Cup final at Russia 2018