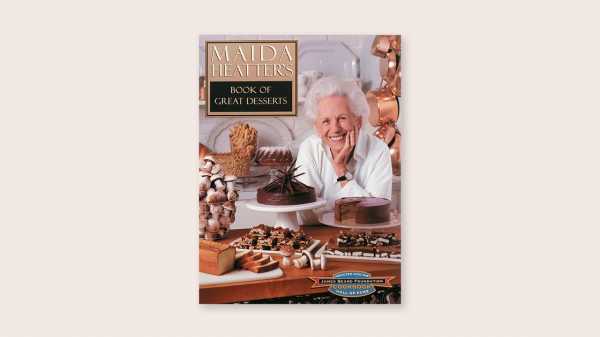 In 1968, when the Republican National Convention came to Miami, an enterprising coffee-shop owner named Maida Heatter decided that the best way to attract business would be with an audacious stunt: she tracked down a supplier of elephant meat and served the G.O.P. mascot sautéed in an omelette, with a side of bananas and crushed peanuts. This novelty item caught the attention of Craig Claiborne, who was then the food editor of the Times; he had visited the restaurant looking for a joke and came away enraptured. Forget the elephant meat: Heatter’s desserts, he found, were among the best he’d ever tried. With Claiborne’s encouragement, Heatter began writing recipes for the Times, and her first cookbook, “Great Desserts,” was published in 1974.

Heatter died earlier this month, at the age of a hundred and two, at her home in Miami Beach, where she had lived for decades, developing and testing all her recipes in an airy kitchen with a view of Biscayne Bay. She was a self-taught baker and a pastry whiz whose clever recipes and charming demeanor won her an adoring audience. Beyond her dazzling skill as a baker, Heatter was an elegant social figure and a charmingly shameless self-promoter. Magnificently dedicated to name-dropping, she delighted in learning about the glamorous lives that her creations lived after they were published. Many of her hundreds of recipes appear, with or without amendment, across multiple cookbooks, with headnotes that update the reader about who had said what to whom about the cookie or cake in question. “I was introduced to Mrs. Tip O’Neill,” she writes in one of her books. “She heard my name and without hesitation she said, ‘Palm Beach Brownies.’ ” (The brownies, mint-studded, became the stuff of further legend when she tossed dozens of them, individually wrapped, into the crowd at the 1998 James Beard Awards, where her work was being inducted into the Cookbook Hall of Fame.) When Saveur profiled Heatter, in 1997, the magazine republished her East Sixty-seventh Street Lemon Cake, one of her earliest Times recipes. “I hear that Bill Blass and Nancy Reagan asked for it,” she said.

Likely Heatter’s most famous recipe is her “Queen Mother’s Cake,” a surprisingly airy flourless chocolate torte—it bypasses the expected fudge-like density thanks to six ounces of fine-ground almonds. It was featured in a number of her cookbooks, including her very first, and became a go-to dessert for the sophisticated-dinner-party set of the nineteen-eighties and nineties. The legend, according to Heatter, is that the cake received its title after being enjoyed by its royal namesake at the home of a prominent pianist; she was apparently so taken by the confection that she asked for a copy of the recipe. “Incidentally, the Queen Mother and I corresponded with each other about this recipe,” Heatter wrote, introducing the recipe for the umpteenth time, in the 1999 reissue of “Great Desserts.”

My favorite Heatter recipe is a variation on “Craig Claiborne’s Cheesecake,” an homage to her patron saint, published in “Maida Heatter’s Book of Great American Desserts.” Over the years, Heatter used the airy, lemon-scented confection as a foundation for various cheesecake riffs. Her “Bullseye” version involves setting aside some of the filling, coloring it with bittersweet chocolate, and then pouring the chocolate and original mixtures into a cake pan in a layered pattern that looks something like a refined tie-dye when cut. I’m partial to a version first published in 1997, in “Maida Heatter’s Cakes”: “Polka-Dot Cheesecake,” in which the chocolate filling is piped in spheres, for a result that looks like Yayoi Kusama was let loose on the dessert table. It’s equal parts elegant and absurd, and, while not exactly a simple recipe, it’s easy enough to pull off if you’re willing to trust in Heatter and do exactly what she says.

‘It’s Going to be the Toughest Decision’: Trump on Reopening the...